While we often post in response to Israel related news stories and commentary at the Guardian and ‘Comment is Free’ which are biased, misleading or inaccurate in some manner, often a Guardian ‘photo of the day’ can similarly serve as a vehicle for propaganda due to the emotive strength of the image, along with a paucity of relevant context.

The following was included in the Feb. 11th edition of the Guardian’s ‘Best Photos of the Day’. 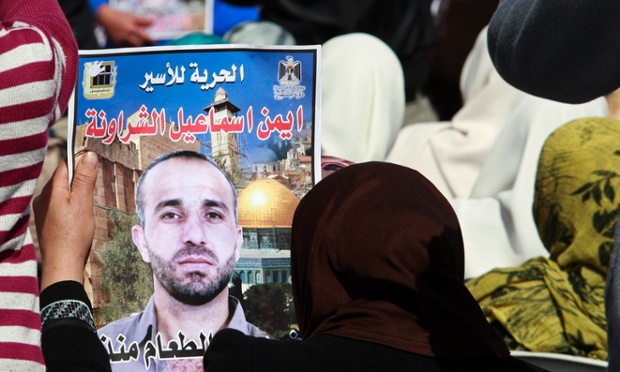 Palestinian women hold pictures of prisoners jailed in Israel during a rally calling for their release in the West Bank city of Ramallah. Photograph: Nasser Shiyoukhi/AP

Now, here’s what a Guardian reader casually glancing at the Palestinian “prisoner” wouldn’t have known.

A friend who’s fluent in Arabic read the poster and identified the ‘prisoner’ as Ayman Ismail Al-Sharawna.

Al-Sharawna was jailed in Israel because of his involvement in a terrorist attack in in May 2002, in which two Palestinians placed an explosive device near a group of civilians in Beersheba and fled the scene. Eighteen Israelis were injured in the attack. (A technical fault prevented the bomb from exploding fully.)

He was sentenced to 38 years in prison, but released on October 18, 2011 as part of the Gilad Shalit prisoner exchange deal.

On January 31, 2012, the IDF re-arrested Al-Sharawna, resident of a Palestinian town near Hebron, on suspicion of having returned to terror planning with a Hamas cell in the West Bank.  He recently began a hunger strike.

Al-Sharawna is a “prisoner” because he tried to murder innocent Israelis, and, after his release, is evidently determined to try to murder again.