On February 15th 2013 an article by the BBC’s Beirut correspondent Jim Muir entitled “What next for Hezbollah, Israel, Syria and Iran?” appeared on the BBC News website’s Middle East page. 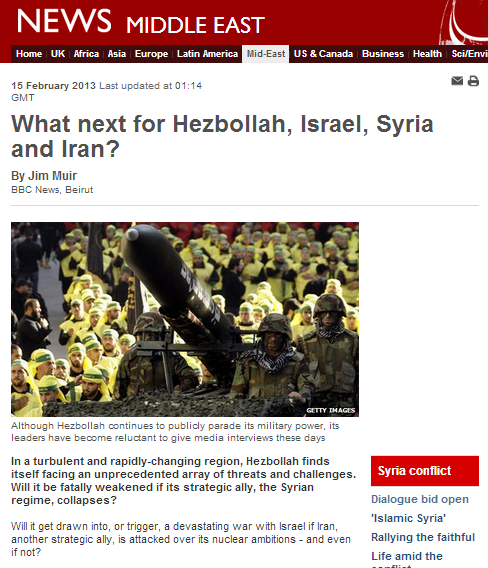 Just one day after the publication of Muir’s article, in which he claimed that “[g]iven the delicate, complex and explosive situation Hezbollah finds itself in, it is hardly surprising that leaders and officials have drawn in and give virtually no media interviews these days to share their views on the above questions”, Hassan Nasrallah clarified the organisation’s approach on several issues when he gave a speech on Hizballah’s “martyrs day”.

During that speech, Nasrallah said:

“The resistance in Lebanon is fully equipped and ready nowadays, we have everything we need to maintain our power… We don’t need any arms from Syria… Israel realizes that”.

That information of course comes as no surprise to anyone following events in the Middle East even loosely. But what is surprising is the ability of Jim Muir to make the following bizarre claim in his article:

“Hezbollah has scrupulously observed the ceasefire that ended hostilities in 2006.” 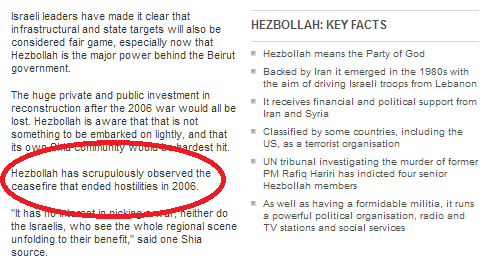 Muir himself states earlier on in the article that “Hezbollah has undoubtedly been building up its arsenal since the last one [war] in 2006”, so either he is obviously aware that the terrorist organisation has contravened that clause of the ceasefire agreement or he is unaware of that agreement’s terms.

Clause 8 of the resolution calls for the establishment of:

“security arrangements to prevent the resumption of hostilities, including the establishment between the Blue Line and the Litani river of an area free of any armed personnel, assets and weapons other than those of the Government of Lebanon and of UNIFIL as authorized in paragraph 11, deployed in this area”.

“full implementation of the relevant provisions of the Taif Accords, and of resolutions 1559 (2004) and 1680 (2006), that require the disarmament of all armed groups in Lebanon, so that, pursuant to the Lebanese cabinet decision of 27 July 2006, there will be no weapons or authority in Lebanon other than that of the Lebanese State“.

“no foreign forces in Lebanon without the consent of its Government”.

Despite the ceasefire agreement, Hizballah is still supplied, trained, financed and enabled by its Iranian patrons, with members of the Quds force present in Lebanon as was recently highlighted by the death of Hassan Shateri.  The situation today is that Hizballah has rearmed even more extensively since 2006 and in violation of resolution 1701, it maintains a presence in the whole of southern Lebanon south of the Litani River, with hundreds of arms dumps concealed in towns and villages, thereby turning the local civilian population into human shields.

The short video below, for example, shows the positions of weapons storage facilities in the village of al Khiam – population around 23,000 – as of 2010.

With regard to violations of the ceasefire agreement in the form of rocket fire alone, since the end of the Second Lebanon War in August 2006 there have been numerous incidents including one in June 2007, five in 2009, two in 2011 and three in 2012 – claimed by proxy paramilitary groups of one description or another, but clearly with the tacit approval (if not more) of Hizballah, which exercises considerable control over the area.

Extensively quoting an assortment of anonymous “observers and analysts” including “Shia sources” and unnamed “Western diplomats”, Muir does his best in this article to downplay Hizballah’s part in the conflict in Syria, the scope of its role as an Iranian proxy and its destabilising influence both at home and abroad – at times even presenting the theocratic sectarian militia as a ‘voice of reason’ in the Middle East and inventing a ‘moderated’ Hizballah.

“Ironically, some western diplomats have even come to see Hezbollah as a factor for stability in the Lebanese equation.

“Our interests are not totally opposed,” said one.”

“Western diplomats, who had been hoping to see Hezbollah move further along the path of moderation and political engagement, were dismayed when the Bulgarian government furnished them with what one called “irrefutable evidence” of Hezbollah involvement in the bombing.”

Significantly too, Muir promotes the illusion of an “imbalance of power”, concealing from his audience the real relevance of the fact that Hizballah is merely one tip of a large Iranian iceberg which destabilizes the region (as well as places further afield) on numerous fronts.

“Despite the imbalance of power in this conventionally asymmetrical match, Western diplomats believe that, with long-range Hezbollah rockets installed in the northern part of the Bekaa Valley and shorter-range ones further south, Israel would face three to four weeks of devastating hostilities if a new war erupted.”

By presenting a false picture of Hizballah’s violations of UN SC resolution 1701, Muir not only fails to fulfil his organisation’s stated aim of informing BBC audiences about the wider world and compromises the BBC’s obligation to accuracy, but he is also clearly giving oxygen to a specific political agenda which some of his mysterious “Western diplomat” sources (which, interestingly, apparently cannot be named, thereby denying the reader the ability to judge those opinions in context)  seem very keen to promote. In doing that, Muir also severely compromises the BBC’s reputation as an ‘independent’ broadcaster.