It did not begin well. Philip Dodd’s introduction to the BBC Radio Three ‘Night Waves’ programme of February 19th 2013 (available here), in which he interviewed Shlomo Sand, went like this:

“Also, an interview with a man who’s received death threats in his own country for denying the Jewish people are a people or have any right to feel morally superior.”

That is a very unfortunate choice of wording. If Dodd was trying to suggest that his interviewee thinks that the Jewish people feel “morally superior” (to whom, exactly, and according to what evidence?), then he should have made that clearer. Otherwise, the impression audiences receive from that throwaway phrase – which is not qualified or clarified later in the programme – is that Jews do think themselves “morally superior” – just as most of them think that they are a people – and issue death threats to those who disagree.

The introduction continues with a recording of Sand himself saying:

“It has to be clear: we came there. They didn’t come there – we came. My parents came there. You pushed us out from Europe and threw us on the backs of the Palestinians. This is the reality. This is history.”

The interview itself begins from around 25:00 in the link above. Dodd did challenge Sand on key issues relating mostly to Leftist thought including the subject of nationalism and homeland as well as Sand’s use of what Dodd rightly termed “a classic sort of Leninist phrase” – “the masses”.  Dodd also made a pretty good job of clarifying Sand’s realistic status within Israeli society: a somewhat totalitarian product of an introverted, elitist academia for whom the country ends with the Tel Aviv municipal boundaries.

Unfortunately, Dodd did not appear to be sufficiently informed (or perhaps inclined) so as to be able to challenge even the worst of Sand’s misrepresentations about Israel itself. Sand’s obviously false  claim that the Palestinian “resistance” understood in the 80s that “Israel cannot vanish” and that it accepts “the principle of the existence of Israel” passed unremarked, as did his claim that “Iran is not a menace”. 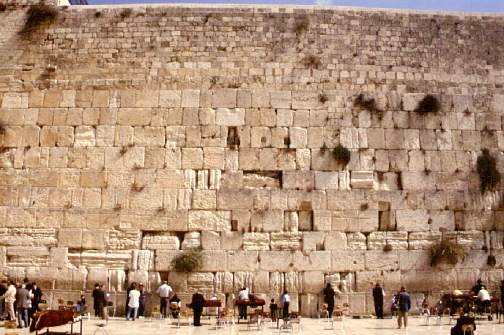 “All these buildings, all these walls are Islamic. There is not a [sic] Jewish architecture. I was looking at it and say [sic] how come they call it the Jewish city and it is a Muslim city. Physically it’s Arab – it’s not Jewish.”

The overall tone of this interview was obviously defined by the fact that Dodd elected to relate to the subject as though he was discussing an academic work with its author rather than a politically motivated polemic with a man who has jump-started what would have otherwise been a fairly obscure academic career by tapping into the flourishing market for anti-Israel propaganda created by Israelis.

Dodd chose not to explore the broader subject of the motivations of the echo chamber in which Sand’s polemics are smash hits. He ignored the fact that Sand chuckles all the way to the bank after having sold the pseudo-intellectual ammunition for further attacks on the “masses” he so despises, but which pay his professor’s salary. Had he elected to explore those aspects of Sand’s book, this interview might have been interesting – and perhaps met Dodd’s own description of it as “spirited”.