A filmed report by the BBC Jerusalem Bureau’s Jon Donnison from the funeral of Arafat Jaradat on February 25th 2013 in the village of Saeer near Hebron was broadcast on BBC television news. 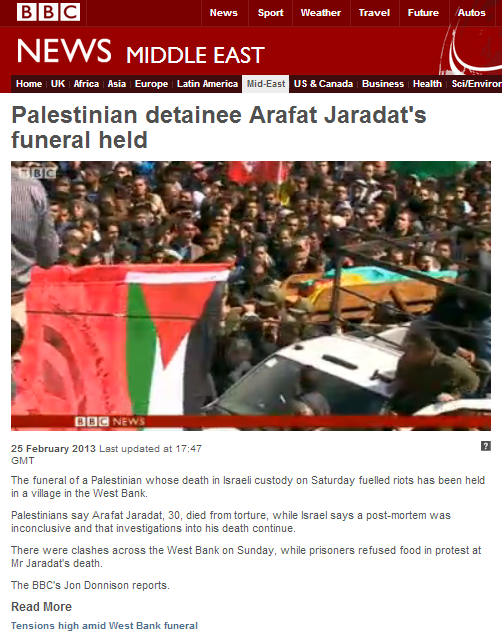 Let’s take a look at Donnison’s report line by line. He begins:

“The body of Arafat Jaradat: the man who Palestinians are calling their latest martyr. There are conflicting versions of how the thirty year-old father of two died.”

Notably, Donnison opens with an immediate attempt to lay down a base line of equivalence between what he terms “conflicting versions”. As previously pointed out here, that approach involves the juxtaposition fact and fiction. Donnison continues:

“He was being held in an Israeli prison on suspicion of stone-throwing when he was pronounced dead on Saturday.”

Donnison neglects to point out that a person was injured by Jaradat’s stone throwing and that he had confessed to the crime:

“According to sources within the Shin Bet (Israel Security Service), Jaradat was arrested on Monday, after residents from his village of Sa’ir outside Hebron said that he took part in a rock-throwing attack in November that wounded an Israeli. Jaradat confessed to the attack during questioning”.

“Israeli officials initially said he suffered a heart attack but after an autopsy, Palestinian doctors say his body showed signs of being badly tortured.”

In fact, the spokesperson for the Israeli Prison Service initially said that Jaradat had “died of an apparent heart attack” – with apparent being the operative word. Donnison’s unquestioning repetition of claims by “Palestinian doctors” (actually, just one Palestinian doctor – the PA’s chief pathologist – was present at the autopsy) is especially bizarre in light of the fact that the results of the post mortem do not present any evidence to suggest that Jaradat was “badly tortured” at all.

The BBC report then cuts to an interview with Issa Qaraaque, the PA Minister of prisoner affairs who – apparently having no need to wait for the results of the autopsy – had already begun flinging about accusations as early as Saturday evening; just hours after Jaradat’s death.

“The prisoner was in the hands of the Israeli Security Agency and was detained in an Israeli jail, so Israel is responsible for what happened to him.”

“The Israeli government had acknowledged Jaradat had broken ribs and bruises, but said this could have been as a result of efforts to resuscitate him.”

Donnison’s use of the word “acknowledged” here is interesting because it implies having to admit something to be true, whereas in fact it was the Israeli pathologist’s report which made that information public in the first place. This is the wording of the statement made by the Israeli Ministry of Health on Sunday evening: [emphasis added]

“This afternoon (Sunday, 24 February 2013), at the National Center for Forensic Medicine, an autopsy was performed on the body of Arafat Jaradat by Prof. Yehuda Hiss, in the presence of Prof. Arnon Afek, Director of the Health Administration at the Ministry of Health, and Palestinian pathologist Dr. Saber Aloul. During the autopsy, no signs of external trauma were found apart from those pertaining to resuscitation [attempts] and a small graze on the right side of his chest. No evidence of disease was found during the autopsy. Two internal hemorrhages were detected, one on the shoulder and one on the right side of the chest. Two ribs were broken, which may indicate resuscitation attempts. The initial findings cannot determine the cause of death. At this stage, until microscopic and toxicology reports are in, the cause of death cannot be tied to the autopsy findings.”

“The body of Arafat Jaradat has just been lowered into the grave in his home village of Saeer. Thousands of people have gathered here for the funeral.”

Donnison neglects to mention that Jaradat was a member of the Al Aqsa Martyrs Brigades, that he was given a military funeral or that many of those present at the funeral were students from the Birzeit and Al Aqsa universities bussed in for the occasion by the Palestinian Authority.

He goes on to say:

“There’s a lot of anger here and it comes after a week where tension has already been building across the West Bank. More than a hundred and fifty people have been injured in clashes between the Israeli army and Palestinian protesters angry at the continued detention of four Palestinian hunger strikers in Israeli jails. There was more violence today. There are fears Jaradat’s death could fuel the flames.”

Donnison fails to inform his viewers that the “clashes” are the result of attempts by the IDF to prevent rioters from blocking roads or reaching areas inhabited by Israelis and that these riots are orchestrated.  Yet again Donnison’s report fails to mention the terror connections of those Palestinian hunger strikers and the reasons for their detention.

The report then cuts to an interview with the Israeli government spokesman Mark Regev:

“Israel expects the Palestinian Authority to act responsibly and to prevent incitement and violence that can only exacerbate the current situation.”

“There has been much speculation in the Israeli media about the possibility of a third Intifada, or uprising. Many Palestinians will tell you there is little appetite for that, but there is a feeling that the status quo cannot continue. The rise in tension comes just weeks before President Obama arrives in the region and the prospect of a resumption in [sic] Middle East peace talks is as bleak as ever.”

This report – like previous ones produced by the BBC on the subject of the PA’s current political campaign surrounding the hunger strikers, together with the associated organized rioting – leads to a couple of observations.

The first of those is that the BBC appears to be avoiding presenting an accurate portrayal to its audiences of the bigger picture behind the rise in violent incidents in Judea & Samaria over the past few months (most of which it has not bothered to report at all) and the use of hunger strikers as leverage for a campaign which includes violent rioting.

The second unavoidable observation is that some BBC correspondents and article writers are rushing to make their own contributions to the PA’s factory of incitement by regurgitating unverified allegations instead of waiting until the facts about Jaradat’s death become clear.

This is not the behaviour of a reputable news outlet dedicated to accurate reporting of the facts surrounding the news. It is the behaviour of an organisation legitimising dangerous propaganda intended to stoke the fires of violent behaviour which – as has so often been the case in the past – could cost lives.