On February 25th 2013 the BBC sent Jon Donnison off to the village of Saeer near Hebron to cover the funeral of Arafat Jaradat who died of causes as yet unknown on Saturday at Megiddo prison. 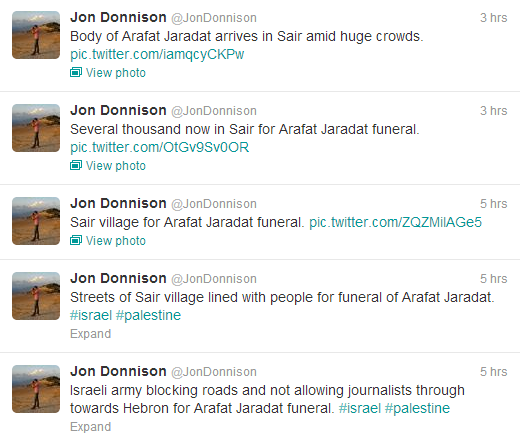 The resulting BBC article on the subject – which currently appears in the Middle East section of the BBC News website – is at the time of writing on its fourth version. Versions zero (original) and one can be viewed here, version two is here and version three here.

To its credit, the BBC report does mention Arafat Jaradat’s membership of the Al Aqsa Martyrs Brigades although, true to form, it refers to members of the organization responsible for the deaths of hundreds of Israeli civilians as “militants” and fails to explain to readers what the organisation actually is and its connection to the ruling PA faction Fatah or to inform them of the fact that Jaradat was buried with military honours.

“Militants from the Al-Aqsa Martyrs Brigades, to which Mr Jaradat belonged, fired into the air and vowed to avenge his death, AFP news agency reported.

“This horrific crime will not go unpunished and we promise the Zionist occupation that we will respond to this crime,” it said in a statement distributed at the scene, the agency said.”

What the BBC also fails to explain to readers is that the above statement is a declaration of intent to carry out more terror attacks. In a section not reported by the BBC, the same statement also said:

“Al Aqsa brigades, the armed wing of the Fatah national liberation movement, mourns with all pride its hero, the martyr of freedom, the prisoner Arafat Jaradat”.

Interestingly, the BBC’s reporter on the ground did not apparently think it necessary to inform his readers of scenes from Jaradat’s funeral such as the one below, photographed by journalist Asaf Gabor.

But the most notable feature about this article is the manner in which it juxtaposes the findings of professional criminal pathologists (not “morticians” as the BBC described those who carried out the autopsy on Jaradat in version two of its article, or even “physicians” as stated in version three) with the politically motivated, agenda-driven propaganda of a PA minister who not only was not present at the autopsy, but, along with several others, began an energetic campaign to promote the notion that Israel is responsible for Jaradat’s death literally hours after the event.

“Palestinians say Arafat Jaradat, 30, died from torture, while Israel says a post-mortem was inconclusive and that investigations into his death continue.”

Actually, “Israel” – or more accurately, the Israeli Ministry of Health – did not say that the post-mortem was “inconclusive”, but that, as yet, it has not been completed:

(It is worth knowing that in some 2% of all autopsies it is not possible to determine the cause of death; for example in cases of cardiac arrhythmia.)

“The father-of-two died six days later at Megiddo prison, from what the Israel Prison Service (IPS) said appeared to be a heart attack.

Palestinian officials, however, said an autopsy, carried out by Israeli physicians showed he had suffered two broken ribs and had bruising.

In the accompanying “at the scene” side box in the report, Donnison also uncritically repeats Palestinian claims – not only despite having no evidence of their veracity, but also in spite of there being no basis for such claims according to the initial autopsy report and with no cause of death having been determined so far.

“There’s real anger here. Palestinians believe Mr Jaradat was tortured before he died in an Israeli prison. Israel disputes this. But this comes after a week where tension has already been building across the West Bank.”

One would expect a Western media outlet which prides itself on its commitment to accuracy to be able to distinguish between the wheat of a scientific medical report and the chaff of agenda-driven rumour mongering. One would also expect that organisation’s self-declared role as an enabler of its audiences’ understanding of world events to cause it to refrain from presenting the factual and the fictional on an equal basis as though both were of comparative legitimacy.

Audiences do not need to go to the BBC for a dose of rumour and speculation: for that there is a whole host of agenda-driven websites on the internet. From the BBC, audiences expect facts – not to mention the ability to distinguish between an as yet uncompleted autopsy report and an “inconclusive” one.