The BBC Editorial Guidelines on the subject of impartiality state that: 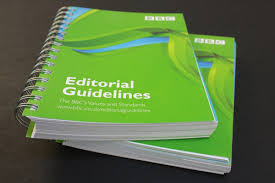 When dealing with ‘controversial subjects’, we must ensure a wide range of significant views and perspectives are given due weight and prominence, particularly when the controversy is active.  Opinion should be clearly distinguished from fact.

News in whatever form must be treated with due impartiality, giving due weight to events, opinion and main strands of argument.  The approach and tone of news stories must always reflect our editorial values, including our commitment to impartiality.

Presenters, reporters and correspondents are the public face and voice of the BBC – they can have a significant impact on perceptions of whether due impartiality has been achieved.  Our audiences should not be able to tell from BBC output the personal prejudices of our journalists or news and current affairs presenters on matters of public policy, political or industrial controversy, or on ‘controversial subjects’ in any other area.  They may provide professional judgements, rooted in evidence, but may not express personal views in BBC output, including online, on such matters.

[All emphasis added]
An anonymously written article from March 1st 2013, which appeared on the Europe and Middle East pages of the BBC News website, related to the subject of reactions to the recent statements made by the Turkish Prime Minister during the keynote address at the UN sponsored ‘Alliance of Civilisations’ conference in Vienna in which he described Zionism as “a crime against humanity”.

Interestingly, the BBC chose not to relate to the offensive nature of Erdogan’s remark itself, but focused on the American and Israeli reactions to the slur.
The BBC article presented a one-sided picture of the 2010 events aboard the IHH ship the Mavi Marmara, describing the Islamists who initiated the violence as “activists” and neglecting to mention either their actions or to give any context regarding the reasons for the naval  blockade’s initiation.

“At a news conference in the Turkish capital, Mr Kerry said he had already raised the issue with Turkish Foreign Minister Ahmet Davutoglu and would also discuss it with Mr Erdogan himself.

The foreign minister again criticised Israeli troops for killing nine Turkish activists in 2010. The activists were aboard a flotilla of aid ships trying to break Israel’s naval blockade of Gaza.

“If some countries acted in a hostile way against our citizens’ right to life, allow us to reserve our right to make a statement,” Mr Davutoglu said.”

But most egregiously, whoever wrote this article (and is it not high time that the BBC began identifying the writers of online articles?) then decided to take it upon himself to ‘explain’ Zionism to BBC audiences.

There is no consensus among Zionists as to where the borders of the state should be.”

The obvious attempt to portray Zionism as a religiously based belief (with implied mythical connotations), rather than a political movement for Jewish self-determination, is as mistaken as the implied territorial expansionism in this ‘explanation’. That description of Zionism is neither accurate nor impartial, but clearly communicates the political views of the writer.
The sentence which follows leaves no doubt as to the writer’s prejudices:

“For Palestinians, the success of Zionism has meant the frustration of their national aspirations and life under occupation.” [emphasis added]

The amount of history ignored in this one sentence is staggering. No mention is made of the Arab refusal to accept the 1947 Partition Plan, thereby preventing the establishment of a Palestinian state which by now could have been almost 65 years old. Neither does the writer acknowledge the 19 year-long Jordanian and Egyptian occupations – beginning in 1948 – of Judea & Samaria and the Gaza Strip, during which no attempt whatsoever was made either by the Palestinians themselves or the occupying powers to meet any kind of “national aspirations”. And of course the fact that there would have been no “life under occupation” whatsoever had Arab nations not chosen to take another shot at wiping Israel off the map in 1967 is also completely ignored.
Instead, the writer absolves the Arab nations in general and the Palestinians in particular of all responsibility and agency for their fate, blaming Zionism for all ills. One might even wonder if this particular BBC journalist moonlights as a speech writer for Erdogan.
Clearly, this article contravenes BBC Editorial Guidelines on impartiality: a correction and an apology should be issued urgently.