Lerman lectured on ‘The Revival of Jewish Culture in Europe’ at Cambridge University on Feb. 28.  I know this because I saw his Tweet to this effect.

Though Lerman is not a frequent Tweeter he found time today to retweet this lovely 140 character ‘meditation’ by David Sheen. 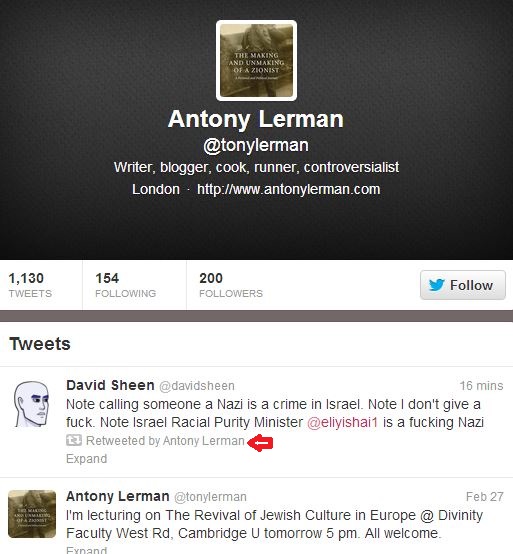 Sheen is referring to Israel’s interior minister, Eli Yishai, and is presumably responding to news that Yishai recently confirmed that more than 2,000 migrants in Israel have recently been repatriated back to Sudan.

I had never heard of David Sheen, but this Zionism – Nazism analogy was not a one-off, as you can see by looking at his Tweets for the day.

In fact, he was kind enough to post the following graphic on his Twitter page to help illustrate the ‘comparison’ between Yishai and Adolf Hitler.

Sheen, a filmmaker, is quite prolific in the social media world, as you can see by the bio on his website.

Here’s a photo of the “documentarian”:

While one of his videos was briefly noted in a Guardian live blog on the Nov. war in Gaza, Sheen hasn’t formally contributed to the Guardian or ‘Comment is Free.  However, he has contributed to Mondoweiss and Electronic Intifada, and has worked as a reporter and content editor at Haaretz.com.

Lerman, a far-left British Jew who has used his position at ‘Comment is Free’ to justify antisemitism, penned his most recent essay at CiF, titled ‘The abuse of dissenting Jews is shameful‘.  In the post, he complained of being ostracized, and smeared by the UK Jewish establishment due ‘merely’ to the fact that he’s an opponent of the Jewish state’s continued existence.  He ended with the following flourish:

That dissenting Jews are still demonised is shameful and undermines Jewish pluralism. But it’s manageable. Because the Jewish diaspora’s support matters so much to Israel’s leaders, the quest for serious, open and civil debate among Jews about what is really best for Israel must continue.

Evidently, Lerman’s expansive understanding of what constitutes “civil debate” about Israel includes not only calling for the state’s dissolution, but likening an Israeli government official to a Nazi.