On Friday, March 8, hundreds of Palestinians emerged from prayers at the al-Aqsa Mosque to throw rocks and petrol bombs at Israeli security personnel stationed near the entrance of the compound.

Eleven policemen were injured during the violence, including one Israeli who was injured by a molotov cocktail thrown at officers by Palestinians, reportedly from inside the mosque.

The Guardian’s ‘Picture Desk Live’ published the following photo shortly after the Friday riots showing the officer who was set on fire. 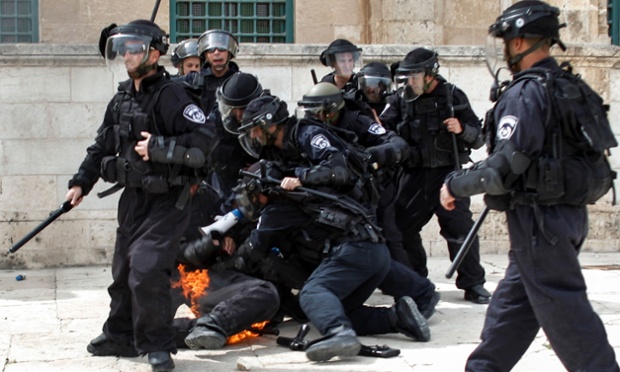 Note that the Israeli policeman is described as “injured”, with no text indicating that he was injured by a Palestinian who intentionally hurled an incendiary device in his direction. (Other news sites which published photos of the injured Israeli managed to explain that the injury was indeed caused by Palestinians.)

Another glaring distortion is achieved by the caption’s blurred causation. Readers are informed only that “clashes broke out”, without assigning blame, as if there was any doubt that it was Palestinian ‘worshipers’ who initiated the violence.

A twenty-eight word caption: so much obfuscation.

Like Loading...
Tags from the story
Al-Aqsa Mosque, Guardian, Jerusalem, Old City, Temple Mount, Uncategorized
Written By
Adam Levick
More from Adam Levick
Yesterday, we posted about a correction prompted by our office to a...
Read More