Here is the BBC’s report  from March 14th on the subject of the suspension of Lord Ahmed from the Labour Party pending investigation of his alleged remarks made during a television interview in Pakistan, as reported by The Times. 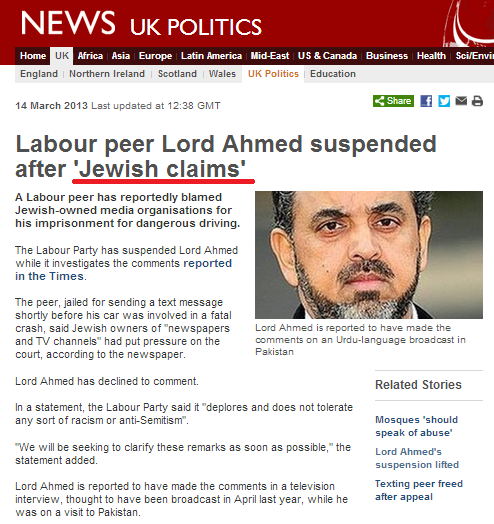 What on earth possessed the BBC to describe those alleged remarks as “Jewish claims”?
The terminology used on Twitter was little better:

According to the Times article:

“Lord Ahmed claimed that his prison sentence for dangerous driving resulted from pressure placed on the courts by Jews “who own newspapers and TV channels”. Britain’s first male Muslim peer also alleged that the judge who jailed him for 12 weeks was appointed to the High Court after helping a “Jewish colleague” of Tony Blair during “an important case”.

He claimed, falsely, that Mr Justice Wilkie was hand-picked and sent from London to carry out the 2009 sentencing at Sheffield Crown Court because no other judge was willing to handle his case. The alleged plot to punish him stemmed, Lord Ahmed claimed, from Jewish disapproval of his support for the Palestinians in Gaza. His comments were made during a television interview on a visit to Pakistan.”

The EUMC Working Definition of antisemitism clearly states that one of its manifestations is:

“Making mendacious, dehumanizing, demonizing, or stereotypical allegations about Jews as such or the power of Jews as collective — such as, especially but not exclusively, the myth about a world Jewish conspiracy or of Jews controlling the media, economy, government or other societal institutions.”

The Labour Party is obviously aware of the implications of the alleged remarks, having stated:

“The Labour Party deplores and does not tolerate any sort of anti-Semitism. Following reports in The Times today we are suspending Lord Ahmed pending an investigation.”

According to The Telegraph, Labour Party leader Ed Milliband added:

“There’s no place for anti-Semitism in the Labour Party, and frankly anybody who makes those kinds of comments cannot be either a Labour lord or a Labour member of Parliament.”

“Katie Wheatley, a criminal law expert and partner at the London solicitors’ firm Bindmans, said that if Lord Ahmed had made such claims in Britain he could have faced prosecution for a hate crime.

“If these words had been spoken or broadcast publicly to an audience in the UK it is certainly possible that they could lead to an investigation as to whether an offence of incitement to racial hatred under the Public Order Act 1986 had been committed,” she added.”

So why did the BBC elect to airbrush the racist nature of Lord Ahmed’s alleged remarks by using the ambiguous terms “Jewish claims” and “anti-Jewish remarks”? Coming hot on the heels of the BBC’s previous attempts to downplay the antisemitic nature of remarks made by David Ward MP (see here, here, here and here), this really does suggest an endemic problem at the BBC.