In the context of the contemporary Middle East, most people would probably associate the word ‘fleeing’ with over one million Syrians currently sheltering in refugee camps in neighbouring countries.
Not BBC radio presenter Lucy Ash, apparently, who saw fit to send the following Tweet promoting an article from Al Jazeera: the Muslim Brotherhood-aligned media outlet which hosts the notoriously racist and homophobic Yusuf Qaradawi. 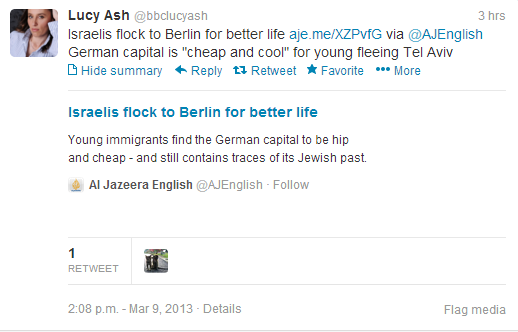 Long-time BBC watchers will probably remember this report by Lucy Ash from 2001.

“As a doctor, Dr Izzeldeen wants to help as many women as possible give birth but as a Palestinian his allegiances are torn.

After a few minutes, a couple emerge from his consulting room – a freckled woman and her square-jawed husband who happens to be a professional Israeli soldier.

When they discover where the doctor comes from, the husband looks as if he has been punched in the stomach. The idea that a Palestinian has just conducted an intimate examination of his wife leaves him speechless.”

A more blatant example of a contrived attempt by a BBC journalist to paint Israelis as racists is difficult to imagine. In the same report Ash also stated:

“With the border sealed, Gaza has become a vast open air jail or as locals call it, the “Big Cage.” “

Obviously, Ms Ash’s ability to stick to BBC Editorial Guidelines on accuracy and impartiality has not improved over the years.