The Guardian’s Chris McGreal published ‘Obama urged: act tough on Israel or risk collapse of a two-state solution‘ on March 19, which contained two signature McGreal tactics. First, there is the suggestion of faux concern by the Guardian reporter, in the context of discussing a two-state solution, that Israel must be ‘saved from itself’, citing “growing warnings” from unnamed Zionist supporters. Also, he again advances his false claim (see also here) that Netanyahu didn’t in fact agree to a 10-month settlement freeze in 2009.

But then there was this especially curious passage:

Others have pointed up a recent Hebrew University demographic study, which showed that Jews are now in a minority in the occupied territories – suggesting that Israel’s democratic and Jewish character are threatened by its reluctance to give up territory to an independent Palestine.

His claim was further illustrated in the accompanying photo caption: 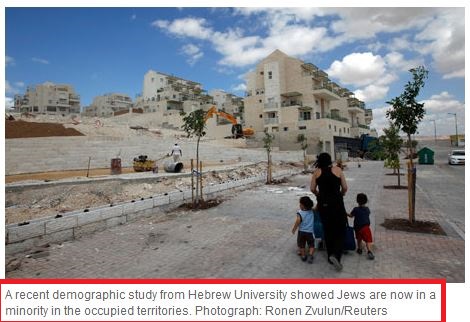 As would be obvious to even the causal Israel observer, of course, Jews are a minority in “occupied territories” and have been so since Israel’s founding.  There are no Jews in Gaza, roughly 325,000 Jews in the West Bank, and another roughly 190,000 in eastern Jerusalem. If you include Golan (another 19,000) that’s 537,000 Jews.  Since the non-Jewish population of of the West Bank is over 2.5 million, you don’t need a demographic study to conclude that Jews are a minority.

So, while it’s difficult to know for sure what McGreal is referring to, he may have been eluding to a recently cited study by Sergio DellaPergola, a Hebrew University professor and expert on Israeli population studies.  However, McGreal, at the very least, evidently flubbed the data.  DellaPergola was citing the population of Jews relative to non-Jews in the entire historic land of Israel – from the Mediterranean Sea to the Jordan River, including Gaza, the West Bank and Israel proper – a politically meaningless stat, and certainly not consistent with McGreal’s characterization of the area as the “occupied territories”.

Here’s a passage from a story about the issue in The Atlantic:

The statistics DellaPergola assembled are clear and their implications are frightening. Right now, the total number of Jews and Arabs living under Israeli rule in Israel, the West Bank, and Gaza is just under 12 million people. At the moment, a shade under 50 percent of the population is Jewish.

Chris McGreal evidently conflated the data, confusing the Jewish population in the ‘occupied territories’ (in which they’re obviously a minority), with the total Jewish population the West Bank, Gaza, and Israel within the green line.

Of course, there is one additional explanation for McGreal’s curious passage about “Jews now [being] a minority in the occupied territories“.  Such a passage would follow only if he considers all of Israel ‘occupied Palestinian territory’.

So, which one is it:

2. McGreal understood the data (concerning the Jewish population in Israel, Gaza and the West Bank), but he embraces the claims made routinely by Palestinian extremists (and some “moderate” Palestinians) that all of Israel is ‘occupied’ Palestinian land? 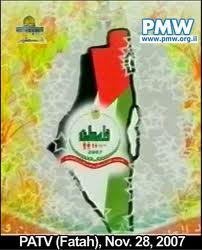 Whilst the former seems more likely, we wouldn’t put it past him to be implicitly endorsing the ‘Greater Palestine’ argument in the latter.