The BBC’s coverage of the visit by Barack Obama to Israel on March 20th 2013 included a rolling article (changes to which can be seen here) featured on the Middle East page and on the Home page of the BBC News website.
Readers of the article will notice another attempt by the BBC to shape audience perception of the new Israeli government and its usual framing of lack of progress in the peace process as being attributable to “continued Israeli settlement construction” – despite the ten month-long building freeze in 2009/10, during which the Palestinian Authority continued to refuse to enter talks for nine months.

“Correspondents say Israelis are more preoccupied with instability in the wider Middle East region than with breathing new life into the peace process, which broke down in 2010 amid a dispute over continued Israeli settlement construction.

Sharp-eyed readers will also notice that the BBC’s article quotes Huwaida Arraf, describing her as a “demonstrator”.

“On Tuesday Palestinian protesters gathered in Ramallah and Bethlehem, some throwing shoes at images of the president and others driving over his portrait, reports said.

“People are angry and disappointed that this far into his presidency, Obama has done nothing, and aid to Israel’s occupation continues to flow,” he (sic) said.”

The article fails to point out to BBC audiences that Huwaida Arraf is one of the founders and leaders of the ‘International Solidarity Movement’ (ISM) and the flotilla-organising ‘Free Gaza Movement’, both of which provide support to Hamas, and who was an active participant in the ISM support group to the Palestinian terrorists who took over the Church of the Nativity in 2002.
As the BBC Editorial Guidelines clearly state in section 4.4.14:

The fact that Huwaida Arraf is not just a run-of-the-mill Palestinian “demonstrator”, but a dual-nationality professional anti-Israel campaigner with a long record of supporting terrorism, should have been made clear to this article’s readers.
One of the ‘protests’ against Obama’s visit, which took place in Bethlehem – not far from the Church of the Nativity, was filmed by the Palestine News Network and translated by MEMRI. The footage shows that this BBC report neglects to mention the burning and vandalising of posters portraying President Obama with swastikas.

The BBC also elected to open this article to comments from the general public, but a lack of appropriate moderation of those comments meant that the thread was soon littered with antisemitic conspiracy theories of “Jewish power” and offensive remarks of other kinds, such as the suggestion that Jews are “driven by greed” or that the US should “start bombing Israeli settlements”. Many of the comments on that BBC article would not be out-of-place on some of the worst Guardian ‘Comment is Free’ threads as highlighted in the 2012 CST report on anti-Semitic discourse. Below are just a few examples. 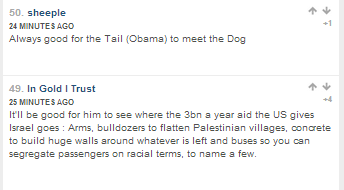 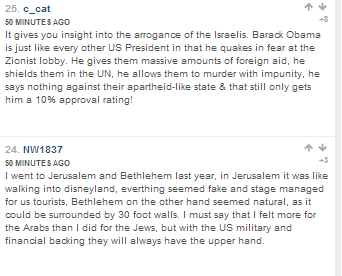 As previously noted here in the past, moderation on BBC articles relating to Israel which are open to comments is often very lax – despite the existence of ‘house rules’ prohibiting comments which display racism, abuse or are deemed “otherwise likely to offend”, as well as those which are likely to “provoke, attack or offend others”.
Clearly, there is an urgent need for the BBC to take a much more responsible approach to moderation on its comments boards in order to avoid being any further complicit in the spread of antisemitic discourse.