When Alexandra Burke sang her way to victory with the Leonard Cohen song ‘Hallelujah’ in the UK version of ‘X Factor’ in 2008, the BBC’s coverage of her win focused on her achievement and on the competition itself. The BBC journalist who wrote the article did not feel it appropriate to take advantage of the event to remind audiences of the minority status of those sharing Miss Burke’s ethnic origins. Her win was not sub-headed as “Triumphing over ‘racism’?” and it was apparently not deemed necessary to inform readers that some black people in the UK “routinely complain that they are treated like second-class citizens”.

When Rachel Christie was the first black person to be crowned Miss England in 2009, the BBC’s coverage of that event also focused on the competition itself, with no mention of complaints of discrimination from Jamaican immigrants to England and no digging up of dubious stories of alleged British wrong-doing to that particular sector of UK society. No MPs were interviewed on the subject of the broader meaning of Miss Christie’s win for English society and no side-box profiling the Jamaican community in the UK was inserted into the article.

But when an Ethiopian-born Israeli woman became Miss Israel and when an Arab-Israeli woman won the local version of ‘The Voice’ singing the same song as Alexandra Burke, the BBC found it insufficient to concentrate on their personal achievements alone. 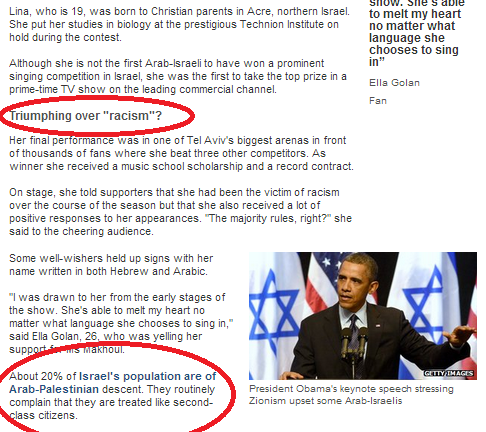 Israel may not be any better than other Western countries when it comes to eradicating racism, but it is certainly no worse. The question which therefore arises is why the BBC saw fit to apply such blatant double standards when reporting on Israeli beauty queens and singers and why it just cannot resist the temptation to portray Israel as a society ridden with racism at any and every opportunity?