Right at the bottom of an article which appeared on the BBC News website on April 1st concerning a new law banning mixed schools which is apparently due to be introduced by Hamas later this year, we find the following statement:

“Israel, as well as the United States and the European Union, regard Hamas as a terrorist organisation.” 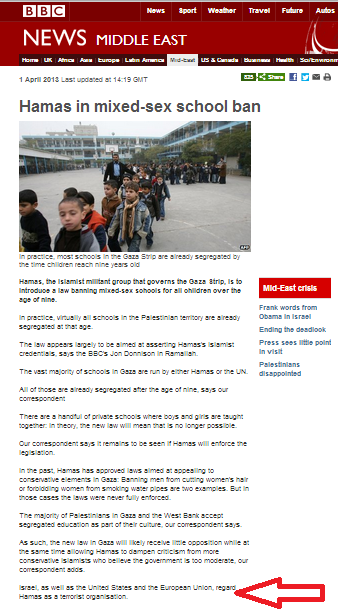 Whilst that statement – taken from the BBC’s profile of Hamas – is true (and a definite improvement upon some previous BBC reports in which Hamas has been described as being proscribed by Israel only), it is not entirely accurate because it does not include full representation of additional countries which also designate Hamas as a terrorist organization either entirely or in part.

For example, Australia designates Hamas’ Izz al Din Al Qassam Brigades as a terrorist organisation, as does New Zealand since 2010. Canada has proscribed Hamas as a whole since 2002 and reviewed and renewed that status in 2012. In 2005 Japan froze Hamas assets as part of its counter-terrorism activity and the ban on Hamas activity in Jordan still stands.

The recognition of Hamas as a terrorist organization is, therefore, considerably broader throughout the majority of the Western world than is stated by the BBC in this and other articles, as well as in its profile of Hamas. It really should not be too difficult for the BBC to keep that profile fully updated and – if space is limited in individual reports – to insert a link to it in order to provide BBC audiences with a full and accurate picture of what the BBC still insists on euphemistically calling a “militant group”.

Another interesting aspect to the above article is its apparent omission of certain details from the new Hamas law concerning schools. According to Fares Akram writing in the New York Times:

“According to a copy of the 18-page law, it is intended to build the nationalist character of the students and prepare them to be “committed to the Palestinian, Arab and Islamic culture.” It says the law is meant to encourage pupils “to get to know Palestine with its historic borders, its history and its connection with its milieus.” It is set to go into effect at the start of the new school year in September.” […]

“The law maintains the freedom of Christian schools to teach non-Muslim students subjects related to their religion.

But it stipulates that any educational institution that receives aid meant to encourage or promote normalization of ties with Israel will face punishment: a 10-year prison term for an individual perpetrator and a fine of 20,000 Jordanian dinar (about $28,200) for any institution involved in organizing exchange programs or activities that include Israelis.”

How come the BBC’s Gaza correspondent ‘missed’ that last part?