On April 3rd 2013 the Radio 4 programme ‘PM’, hosted by Eddie Mair, ran a report by Jon Donnison about a student from the Gaza Strip who is to study at Oxford University. The relevant section can be heard here from 40:38. Listeners will note Donnison’s inability to resist the insertion of a misleading reverse chronology account of recent events in the region which is entirely unrelated to the report’s subject matter.

“…we’ve had an Israeli airstrike and Palestinian rockets being fired in the other direction.”

On April 4th, a written report by Donnison on the same subject appeared on the BBC News website. 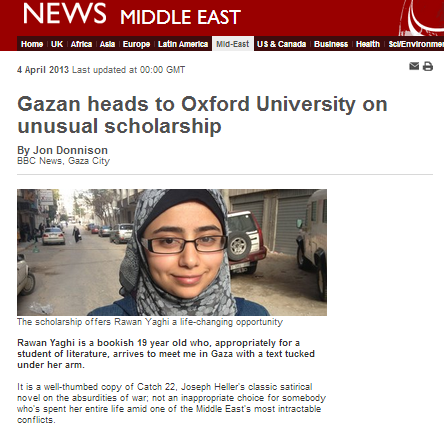 In that article Donnison informs readers that:

“Rawan has only once before left the tiny Palestinian territory, when she went on a study trip to the United States.”

What he ‘forgets’ to tell his audiences is the fact that Ms Yaghi is a contributor to the anti-Israel blog ‘Mondoweiss’ and that the “study trip” included being the house guest of that blog’s editor. In fact, the young student described by Donnison as “bookish” is actually something of a political activist, running her own blog and expressing opinions on her Twitter account which leave little room for doubt as to her leanings. 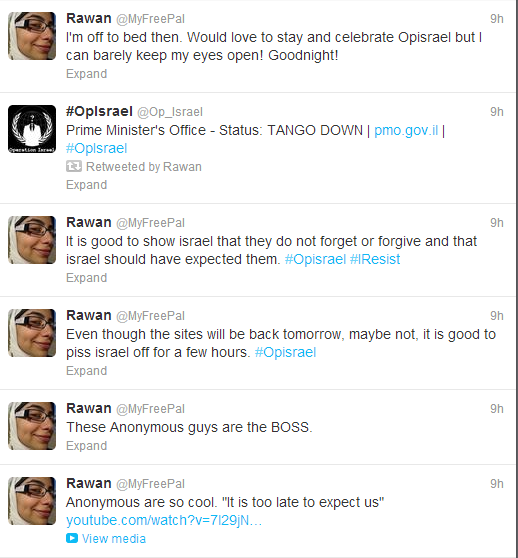 Here she is on the subject of the two Palestinians from Anabta who attacked soldiers at an IDF checkpoint with firebombs: 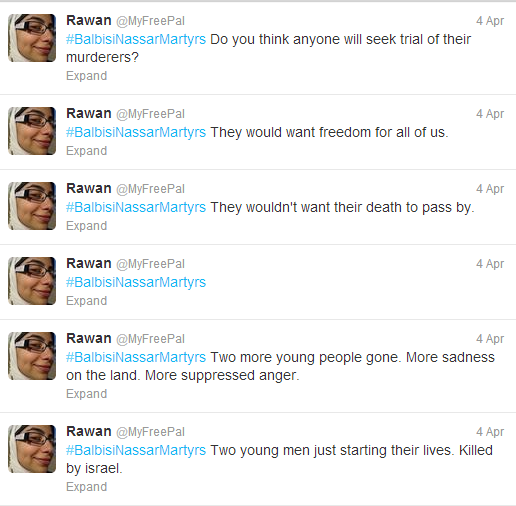 And here on the subject of convicted terrorist Maysara Abu Hamdiyeh: 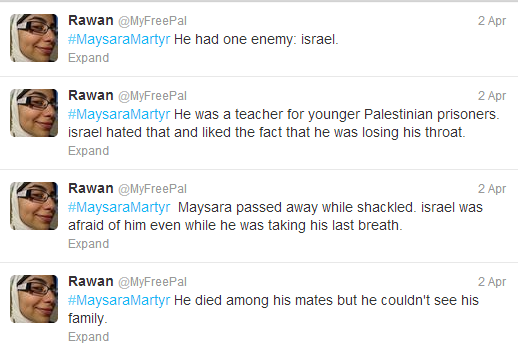 Donnison goes on to assert:

“Israel’s blockade of Gaza and the ongoing conflict with Hamas which governs here make it difficult for Palestinians to leave through Israel.

In the past, Israel has refused permission for Palestinian students to leave Gaza in order to carry out studies abroad.”

Donnison does not provide a source for his throw-away simplistic claim, but it would not be surprising if it had come at least in part from the politicized NGO ‘Gisha’ (which is not infrequently quoted by the BBC), as one of that organisation’s pet projects is the subject of travel for students.

Donnison makes absolutely no effort to explain to his readers the security concerns which necessitate the close monitoring of the exit of travellers from a hostile entity ruled by a terrorist organisation at war with Israel. Neither does he bother to remind readers that the Gaza Strip has a border with Egypt – through which entry to and exit from the Gaza Strip are conducted without Israeli intervention.

Although travel for students wishing to attend universities other than those located in the Gaza Strip is not classified as a humanitarian issue, the guidelines on entry into Israel do make provisions for such cases, subject to security considerations.

“Entry of scholarship holders to Israel – Residents of the Gaza Strip who are holders of a recognized scholarship from a country which has diplomatic relations with the State of Israel or from an international organization which is recognized by the State of Israel (by the Ministry of Welfare, Interior or Foreign Affairs), who intend to take up academic studies abroad, may enter Israel in order to attend a visa interview or for the purpose of travel abroad, subject to a direct application by the Embassy or Consulate of the country in which they propose to study and subject to escort by the Embassy or Consulate.”

Readers may remember the much-publicised case from 2008 in which a group of recipients of American scholarships from the Gaza Strip were initially barred from travel into Israel on security grounds, but after much diplomatic pressure on the part of the US, were eventually given permission. Later, two of them were refused entry to the US after their visas were suddenly revoked due to “new information received by the US authorities”.

Donnison of course ignores the realities reflected in cases such as the above, as well as those in which Hamas has banned students from studying abroad. According to his narrative, only Israel can be to blame for the frustrated academic aspirations of young Gazans.

Donnison’s transparent use of this ‘human interest’ story as a hook upon which to hang promotion of the standard, monochrome BBC theme of plucky Palestinians battling an all-powerful Israeli oppressor totally ignores – as usual – the fact that restrictions on travel into Israel from the Gaza Strip for students and others would not be necessary were it not ruled by a terrorist organization committed to conducting  war against its neighbours. Until it begins to inform audiences of the responsibilities of the Palestinian leadership for the situation of its people, the BBC will not meet its obligations on accuracy and impartiality.