The BBC’s employment of the opportunity provided by the film ‘The Gatekeepers’ to advance jaded stereotypes relating to Israel began with coverage of its Oscar nomination back in February with reports on the subject from Kevin Connolly, among others.

Two months on, the baton has been picked up by Lyse Doucet, with a written article appearing on the BBC News website on April 10th along with an excerpt from a BBC World filmed programme on the subject. 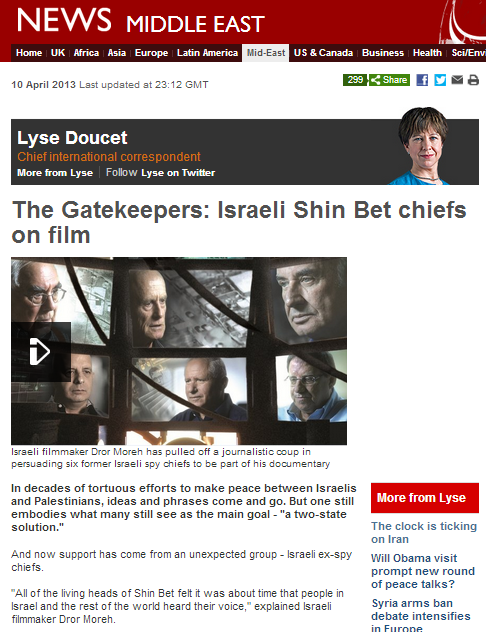 This could have been an excellent opportunity for the BBC’s Chief International Correspondent to point out to her audiences that the very fact that this film was made at all is testimony to the vibrancy of Israel’s democratic credentials, not least as the film enjoyed funding from the Rabinovitch Fund (which is in turn funded by the Tel Aviv-Yafo Municipality, the Israeli Government Department for Culture and Sport and the Israeli equivalent of the National Lottery) and from Israel’s equivalent of the publicly funded BBC – Channel 1.

Instead, both Doucet’s reports advance a simplistic interpretation of the film which is used to promote existing memes frequently propagated by the BBC. In the filmed report we see J Street founder and New Israel Fund board member Daniel Levy  say at 03:18:

“And I think the worrying thing is, will you still have an Israeli security establishment that plays that braking role? The new head of the Shin Bet – of this establishment – there was a suspicion that there was a political involvement there; that this guy is more sympathetic to a harder Right cause. You have the Israeli officer training corps increasingly drawn from the settler national religious establishment, so there’s a sense that the security is gonna (sic) line up more with the more extreme politics in the future.”

On what does Levy base those two assertions – both totally unquestioned by Doucet? As far as the subject of IDF officers coming from a specific background is concerned, as anyone familiar with the Israeli army knows, entry to an officer training course is based solely on ability – not postcode or religious/political belief. Levy’s implication that there is some sort of ‘guiding hand’ responsible for the fact that many of the outstanding soldiers who make it to officer level come from a specific sector of Israeli society – and that they all automatically sympathise with “extreme politics” – is not only stereotypical and mistaken, but it also neglects to inform audiences of the fact that soldiers of other political inclinations have exactly the same opportunities open to them.

As for Levy’s rather ugly unsourced innuendoes regarding the current head of the Shin Bet, they seem to be based on little more than the fact that Yoram Cohen is the first religiously observant person to fill that position and Levy’s own resulting preconceived assumptions regarding his political beliefs.

The head of the Shin Bet is appointed after the outgoing head makes recommendations to the Prime Minister. In this case, Yuval Diskin recommended three of his deputies, of which Cohen was one for three years. The decision regarding the appointment was made jointly by the Prime Minister and the Minister of Defence at the time, Ehud Barak, and then – according to protocol – approved by the Turkel Committee and the government. Levy ignores Cohen’s 30 years of service in the Shin Bet at the time of his appointment and his renowned expertise on the subject of radical Islamic organisations – particularly Hamas – in order to advance an evidence-free trope clearly designed to leave the listener with a very specific impression. 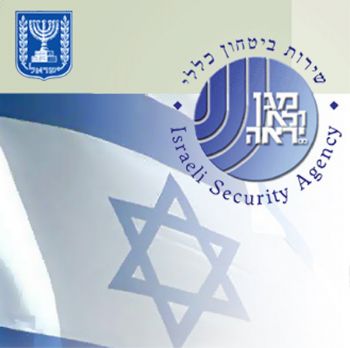 Throughout the conversation Levy, Doucet and the film’s director Dror Moreh all promote the notion that the current Israeli Prime Minister has not done enough to make peace with the Palestinians and cast doubts upon the sincerity of his commitment to a ‘two state-solution’. This one-dimensional portrayal is not balanced by any mention of the efforts which have been made in the last four years – or prior to that – and Doucet allows Moreh to claim that “the building in the settlements have continued to be larger and more deeper” (whatever that means) without making any mention of the ten month-long building freeze which was ignored by the PA for 90% of its duration.

In fact, an average audience member watching this programme or reading Doucet’s article would go away convinced that the peace process is a one-sided affair in which only Israelis have a part to play, that Israelis have no interest in making peace and that the ‘two state solution’ is not a majority consensus in Israeli society.

At one point in the programme Doucet says of the film:

“It is an Israeli conversation. There are no Palestinians in this film except of course in the footage.”

Despite having articulated that, Doucet has clearly missed the point that an “Israeli conversation” is exactly what this film is and that Israelis watching it will be in possession of the background information necessary in order to view the film in context. Israelis will know, for example, that three of the former Shin Bet heads interviewed took up political careers after their retirement from that organisation, and hence will be capable of contextualising their words within the framework of their various political views and aspirations. Israelis will also be only too aware of the important context of the security situations which form the subject matter of the interviews, but which are not represented in this film because there is no need to tell Israelis involved in this internal conversation that, for example, they are regularly bombarded by rocket fire from the Gaza Strip.

Doucet’s treatment of this subject is banal and disappointing. There are not many countries – including Western democracies – capable of producing a film like this one in which an ongoing conflict is openly discussed by people who were – and in many cases still are – part of the establishment. Rather than clarifying to audiences the film’s function as testimony to Israeli democracy and freedom of speech, Doucet elected to go down the well-trodden route of using it to promote weary and inaccurate mantras such as ‘Israel isn’t doing enough to make peace’, which do nothing to enhance audience understanding of the dilemmas facing the country which ultimately produced it.