An article entitled “Israel rules out charges over Gaza Dalou family deaths” appeared in the Middle East section of the BBC News website on April 14th 2013. The item relates to the findings of the Military Advocate General’s Corps in an investigation into an incident during ‘Operation Pillar of Cloud’ in which twelve people were killed in an IDF airstrike on November 18th 2012.

The report claims that:

“More than 150 Gazans and six Israelis were killed in the brief but brutal conflict last year, named Operation Pillar of Defence by Israel.

Most of those killed were civilians, according to UN figures.”

Whilst the BBC does not specify which UN body or agency it is quoting, it seems likely that it may be basing that statement on one of several reports by UN OCHA. Alternatively, the intention could be to refer to the UN HRC report of March 2013 which actually states:

“During the crisis, 174 Palestinians were killed in Gaza. At least 168 of them were killed by Israeli military action, of whom 101 are believed to be civilians, including 33 children and 13 women.” [emphasis added]

Unfortunately – as has been the case in the past – the BBC once again does not acknowledge the complexity of differentiating between civilians and combatants in a situation of warfare waged by terrorist organisations or the fact that other reports on the subject indicate that 60% of the casualties were terrorist  combatants.

The article fails to inform readers that the civilian/combatant casualty ratio in other conflicts around the world is known to be significantly higher than those claimed in even the most pessimistic reports on ‘Operation Pillar of Cloud’.

“The UN estimate that there has been an average three-to one ratio of civilian to combatant deaths in such conflicts worldwide. Three civilians for every combatant killed.”

The article and the side box of ‘analysis’ by Wyre Davies both make abundantly clear the BBC’s discontent with the MAG’s findings, according to which there are no grounds for a criminal inquiry into the incident. The article states:

“The BBC’s Wyre Davies says the attack on the Dalou house became a defining moment of the conflict, and challenged Israel’s assertion that it was carrying out surgical strikes on enemy targets.”

That theme is repeated in Davies’ so-called ‘analysis’.

“Irrespective of whether or not there was a legitimate “target” in the house, the thing that struck me was that, up to that point, Israel had made a huge deal about its “surgical strikes”.” 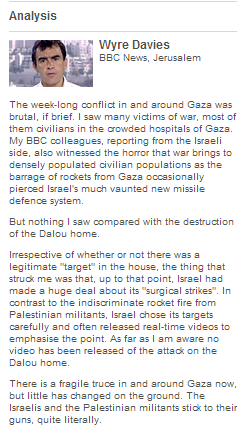 Well over a thousand strikes were carried out during the eight-day operation. The fact that a target was misidentified – as is regrettably inevitable in warfare, particularly in a built up area – does not “challenge” the existence of a policy of precision strikes against terrorist targets, as Davies seems to be keen to insidiously imply. Neither is there any basis for the impartiality compromising smear implied by the use of inverted commas around the word accidental in a tweet from Davies on the day this article appeared.

Interestingly, Davies appears to have nothing to say about the terrorists’ cynical strategy of deliberately locating military equipment and personnel among the civilian population, thus increasing the likelihood of civilian casualties.

The article goes on to say:

“Human rights groups had described the incident as a war crime and called for criminal prosecution.”

The BBC refrains from informing readers which ‘human rights groups’ it elects to quote, but it seems quite likely that one of them might be ‘Human Rights Watch’. The BBC’s lack of transparency with regard to naming the sources of such serious allegations is deplorable. It denies audiences the ability to check both the veracity of the statement quoted and the reliability of the organization making it, rendering the BBC little more than a sensationalist rumour-monger.

Davies’ side-box of ‘analysis’ is actually more a collection of anecdote and subjective impression than that heading would suggest. BBC audiences are unlikely to expect its reporters to be capable of analysing the findings of experts on military law, but when they are proffered as exactly that, such obviously emotion-based polemics severely compromise the BBC’s reputation for accuracy and impartiality.