The statement “history is written by the victors” is often attributed to Winston Churchill – although he may well have changed his mind about that had he lived to see some of the modern-day inversions and distortions of Middle East history which are becoming increasingly commonplace.

We previously addressed here the subject of archaeological excavations in Area C when Yolande Knell conscripted herself to the Palestinian Authority’s publicity campaign on the subject of Herodion, but it is necessary to now revisit that subject  in light of an April 15th article by Raffi Berg entitled “Israel heritage plan exposes discord over West Bank history“.

First, the facts. In February 2010 the Government of Israel announced a much-needed long-term plan to invest in the conservation of hundreds of archaeological and heritage sites all over Israel.

“Today, we are due to approve a comprehensive plan, the largest ever, to strengthen the national heritage infrastructures of the State of Israel. We will do four things:

We will rehabilitate archaeological and Zionist heritage sites. We will build and enrich archives and museums. We are talking about approximately 150 sites.

We are due to invest almost NIS 400 million, with the assistance of 16 Government ministries. We will create two trails: An historical trail of archaeological sites from the Biblical, Second Temple and other eras in the history of the Land of Israel and a trail of the Israeli experience that joins the main sites which relate the history of a people’s return to its land.”

Among the sites and projects selected for investment, a handful are located in Area C which, according to the Oslo Accords signed willingly by the representatives of the Palestinian people, remains under Israeli control until the outcome of negotiations stipulates otherwise. Most of those sites are located in areas which according to any reasonable appraisal of the possible outcome of final status negotiations (if and when they ever come about) would remain under Israeli control.

In his article about this comprehensive conservation project, Raffi Berg chose to ignore well over 90% of the projects, focusing only upon those considered ‘controversial’ by the Palestinian Authority and a politically motivated NGO. The core of Berg’s article bears eerie resemblance to a publication put out in June 2012 by that NGO – ‘Emek Shaveh’ – which was written by Yonatan (Yoni) Mizrachi.

Mizrachi is also featured extensively in Berg’s report, where his organization is given the brief anodyne description of being one which “opposes the “politicisation” of archaeology”.  Perusal of Mizrachi’s above-mentioned publication will quickly bring readers to the understanding that any opposition by ‘Emek Shaveh‘ to the “politicization” of archaeology is, to put it mildly, very selective. In fact, that NGO’s entire raison d’etre is to promote a particular political standpoint through the use of archaeology, as can be seen on its campaigning website and in its contributions to politically motivated campaigns on the subject of Jerusalem.

Berg’s failure to accurately inform BBC audiences of the political motivations of ‘Emek Shaveh’ represents yet another in the growing collection of instances in which the BBC advances the agenda of a political NGO, thus compromising its own editorial guidelines on impartiality which clearly state: [emphasis added]

“The West Bank is an integral part of the history of Palestine,” says Hamdan Taha, director of the Palestinian Ministry of Tourism and Antiquities. “Netanyahu’s heritage plan is an aggression against the cultural right of Palestinian people in their own state,” as the West Bank’s status is considered to be by many Palestinians.

Mr Taha says the Israeli government’s emphasis on the Jewish historical aspect of some sites is “an ideological misuse of archaeological evidence”.

“Jewish heritage in the West Bank – like Christian or Islamic – is part of Palestinian heritage and we reject categorically any ethnic division of culture.”

Raffi Berg chooses to ignore some of Mr Taha’s more colourful past statements on the subject of archaeology, including his belief that “archaeology can put Palestine on the map, literally and figuratively” and his concurrent and presumably not unrelated denial of Jewish history in Judea and Samaria which is often expressed in less than ministerial terms.

“In Shiloh the settlers pretended to have found the tabernacles,” he [Taha] proclaimed. “They can find the chicken bone my grandfather ate 50 years ago and say it was a young calf for ancient sacrifice.”

Whilst it is not made clear in the article whether or not Raffi Berg is also responsible for the interactive graphic featured under the heading “Israeli national heritage sites in the West Bank”, that graphic includes two historic sites which even the ‘Emek Shaveh’ document from June 2012 does not pretend are included in the project, although they were among the hundreds of additional sites originally proposed. Of the Cave of the Patriarchs in Hebron and Rachel’s Tomb, ‘Emek Shaveh’ states:

“However, after reevaluation it was decided not to include the two sites on the list.”

Despite that, the BBC’s graphic inaccurately informs readers otherwise. 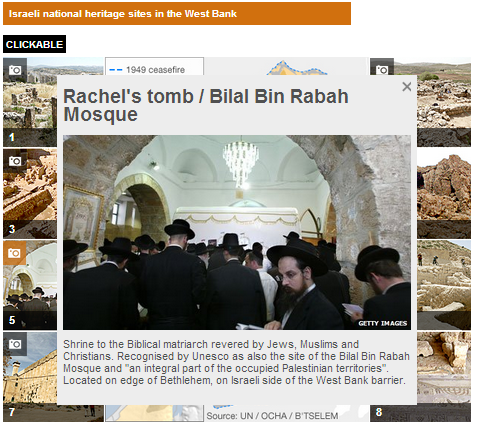 Whilst Berg’s article does nod to the required impartiality by including quotes from a resident of Shiloh, a representative of the Israeli Prime Minister’s Office and the head of the archaeology department of the Civil Administration, the very choice of subject matter and the presentation of heritage projects as having political motivations indicates that the intent of the article is to advance a specific political narrative, ironically by seemingly highlighting an opposing one and by promoting the idea of moral – and historic – equivalence.

By lending oxygen to the long-existing Palestinian Authority campaign to distort history and deny Jewish connections to what objectively (whatever one’s opinions of the desired form a negotiated settlement to the conflict should take) cannot be seen as anything other than a geographical area steeped in Jewish heritage, Berg is severely compromising the BBC’s reputation for impartiality.