British readers may have heard of the ‘Al Mayadeen’ TV station which was launched in June 2012 as an alternative to Al Jazeera and broadcasts from Beirut – if only because it employs one George Galloway for, according to The Times, some £80,000 a year. Those familiar with Galloway’s record at the Iranian outfit ‘Press TV’ will perhaps not be surprised to learn that Al Mayadeen’s financial backers are alleged to be Iranian and Syrian. That is denied by the station’s Tunisian director, who formerly worked for Al Jazeera – as did his colleague Sami Kleib (also spelt Kulyab). Kleib’s wife Luna Shibl – previously of Al Jazeera too – has apparently worked as a media advisor to Bashar al Assad.

Al Mayadeen’s Chief Correspondent is another former Al Jazeera employee and – like several of his new colleagues – Ali Hashem resigned in March 2012 after just a year with that station, as a result of differences with the Qatari channel over its reporting of the ‘Arab Spring’. Hashem also writes for other outlets, including ‘Al Monitor‘. 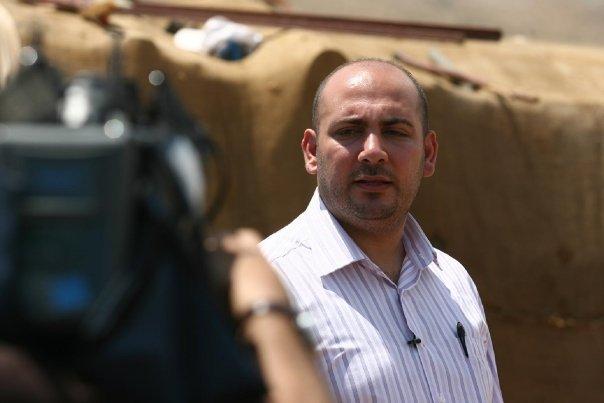 But the more interesting part of Ali Hashem’s CV comes before he joined the BBC, when he worked for the Hizballah TV station Al Manar – the self-proclaimed “station of the resistance” – which was declared a Specially Designated Global Terrorist Entity by the United States in 2004. Al Manar was also banned by France on the grounds of its incitement of racial hatred, as well as by Germany and other countries.

In this video Ali Hashem can be seen being interviewed by a Channel 4 reporter on the subject of the Israeli air strike on Al Manar’s communications facilities during the Second Lebanon war which broke out on July 12th 2006 after a cross-border attack by Hizballah. During that war Ali Hashem was one of Hizballah TV’s men on the ground in southern Lebanon and was on the scene at Qana on July 30th 2006 after 28 Lebanese civilians tragically died following an Israeli air strike on a Hizballah rocket launching site. Hashem’s report as it was broadcast on Al Manar TV can be seen here (warning: graphic images).

The fact that at the time, the BBC apparently did not consider there to be anything inappropriate about recruiting a recent employee of a terrorist organisation’s media arm is frankly amazing, especially as Mr Hashem’s newest gig suggests that his political sympathies and affiliations have not changed vastly since he worked for Hizballah.

One can only hope that the BBC’s Human Resources department has reviewed its hiring policy since then.