The BBC’s reporting on the weekend’s unfolding events in Syria is in top gear. On May 4th an article entitled “Israeli warplanes launch air strike inside Syria” – including a filmed report by Wyre Davies which was also broadcast on BBC television news – appeared on the Middle East page of the BBC News website.

That frequently amended article relating to the events of May 2nd/3rd was based on a CNN report which in turn was based on claims made by anonymous US officials. According to the BBC article, a consignment of weapons destined for Hizballah was the target of Israeli air-strikes. The article states: [emphasis added]

“While Israel rarely comments on specific operations, it has repeatedly said it would act if it felt Syrian weapons, conventional or chemical, were being transferred to militant groups in the region, especially Hezbollah, says the BBC’s Wyre Davies in Jerusalem.”

Actually, it is probably safe to assume that any decision to send Israeli pilots on a mission to neutralize weapons consignments in enemy territory is based on considerably more than a ‘feeling’.

On May 5th coverage expanded to include the events of the night of May 4th/5th under the headline “Damascus ‘hit by Israeli strikes'”.

The coverage included a rolling article entitled “Damascus military facilities ‘hit by Israel rockets’” in which readers were informed that:

He says Israel will not want to be seen as being involved in the conflict, but Syria’s state media is hammering the message that the rebels are working hand in glove with Israel.”

Apparently, any Israeli action is to be considered much more of a “dangerous development” than the possibility of long-range missiles or chemical weapons falling into the hands of a terrorist organisation. And of course that particular “message” from the Syrian authorities is nothing new – and neither is its uncritical repetition by the BBC.

That passage was later replaced by the following one:

“The BBC’s Yolande Knell in Jerusalem says the latest developments are a significant escalation in Israel’s involvement in the conflict.

She says Israel has already responded to fears of retaliation by locating two batteries of its Iron Dome missile defence system near Haifa, close to the Lebanese border.”

Haifa is, of course, some 43 kilometers from the Lebanese border.

The latest version of that article includes a side box of analysis by Jim Muir in which he – like Yolande Knell – seems to be incapable of distinguishing between an act of self-defence and “involvement” in the Syrian civil war.

“Two air strikes in 48 hours does indeed start to look perilously like the involvement in Syria’s internal crisis the Israelis have always said they want to avoid, especially when they are visibly taking out military targets on the very edge of Damascus.” […]

“Israel has said that its only concern is to prevent advanced weapons being handed over to Hezbollah. Objectively it would be hard to see Israel’s interest in helping trigger an uncontrolled collapse of the regime, leaving the field open to rebel groups among which Islamist radicals currently make the running.”

Muir appears to be incapable of grasping the fact that beyond the issue of weapons being transferred by the Syrian regime to its allies Hizballah – a situation which would prompt further deterioration of the security situation in Lebanon and Syria as well as Israel – the very real possibility of weapons falling into the hands of those “Islamist radicals” also carries with it the potential for further destabilization of the region as a whole.

The BBC’s coverage also includes an article by its Defence Correspondent Jonathan Marcus entitled “Israeli air strikes: A warning to Syria’s Assad“. Whilst all in all a balanced and informative article, in common with the BBC coverage of the strike on a weapons convoy last January, it fails to inform readers of the all-important context of UN Security Council Resolution 1701 and the international community’s utter failure to either disband Hizballah or prevent it from rearming after the 2006 war which has enabled the current situation to come about.

Regrettably, the BBC also saw fit to resurrect a deeply flawed article from 2011 under the link titled “Are Hezbollah terrorists?” for inclusion in its coverage of these events.

But the worst was yet to come. A later BBC report ran the headline “Israeli strikes on Syria ‘co-ordinated with terrorists‘“, yet again uncritically repeating baseless statements put out by the Assad regime.

“The Syrian foreign ministry statement said three military sites had been hit – a research centre at Jamraya, a paragliding airport in the al-Dimas area of Damascus and a site in Maysaloun.

“The flagrant Israeli attack on armed forces sites in Syria underlines the co-ordination between ‘Israel’, terrorist groups and… the al-Nusra Front,” the statement said, referring to al-Qaeda militants fighting with the rebels. […]

The statement added: “This leaves no room for doubt Israel is the beneficiary, the mover and sometime the executor of the terrorist acts which Syria is witnessing and which target it as a state and people directly or through its tools inside.” “ 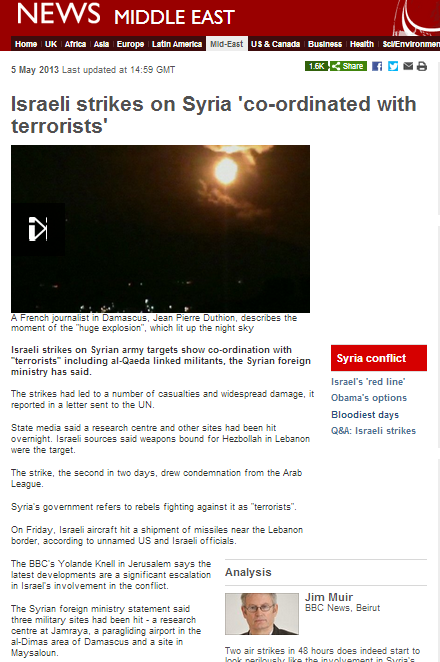 As one Tweeter succinctly put it:

And no – the use of inverted commas in that headline does not excuse the unquestioned, context-free promotion of propaganda from a regime which has already killed over 70,000 of its own people.