The BBC News website’s Middle East page is running an article claiming that Professor Stephen Hawking has been persuaded by an anti-Israel organisation to boycott a conference in Israel.

“UK cosmologist Prof Stephen Hawking has withdrawn from a high-profile Israeli conference, apparently in support of an academic boycott of the country.

The British Committee for the Universities of Palestine said Prof Hawking had taken advice and acted based on “his knowledge of Palestine”.” 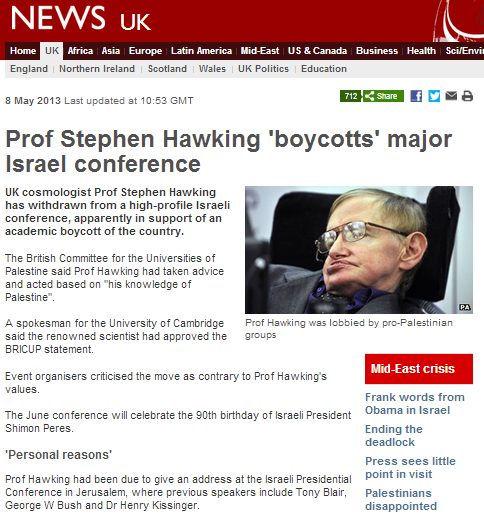 Embarrassingly for the BBC, its habit of taking statements made by politically motivated NGOs at face value – and publishing them without sufficient fact checking – appears this time to have backfired.

Our friends over at The Commentator did do some fact-checking however.

“However, a Cambridge university spokesperson has confirmed to The Commentator that there was a “misunderstanding” this past weekend, and that Prof. Hawking had pulled out of the conference for medical reasons. A University spokesman said: “Professor Hawking will not be attending the conference in Israel in June for health reasons – his doctors have advised against him flying.”

When pressed, the spokesperson confirmed that the BRICUP organisation had assumed Hawking’s position on the matter, and that it was fundamentally untrue.”

One trusts that the BBC will be issuing an immediate apology to all concerned, as well as conducting an investigation into this breach of its own editorial guidelines on accuracy and impartiality.

Update: It now seems that within the last few hours, Professor Hawking’s spokesman has done an about turn.