This is a guest post by Gidon Ben Zvi

Check out the front page of Monday’s (May 6th, 2013) edition of The Guardian and your hair will be blown back by this scorching headline: “Syria Accuses Israel of Declaring War”. The fact that The Guardian chose to legitimise the Syrian narrative is a relatively minor nuisance in an article that effectively intertwines one nation’s right to self-defence with the looming threat of a wider regional conflict.

The article, written by Julian Borger and Joel Greenberg, does not deny the Israeli version of events leading up to the recent air strikes against military targets around Damascus. Rather, and much more insidiously, the piece draws an incongruous parallel between terrorism’s enablers and the chief regional check against its expansion.

First, The Guardian quotes an Iranian army ground forces commander as saying that, “Iran was ready to train the Syrian army if necessary”. Next, the winds of war are further fanned with this bit of sabre rattling, courtesy of the office of the Egyptian president, Mohamed Morsi, which denounced the attack, declaring it illegal and a threat to “security and stability in the region“. Meanwhile, Nabil Elaraby, chief of the Arab League, appealed to the U.N. Security Council to “move immediately to stop the Israeli aggressions on Syria”.

The Guardian fails to frame the most recent conflagration between Israel and the forces of terrorism with appropriate historical context, therefore distorting coverage enough to publish inaccurate information. Exhibit A: whilst ‘Hezbollah’ is mentioned several times, no space is dedicated to defining what ‘Hezbollah’ is: an extremist Shiite Muslim group that receives financial and political support from Iran and Syria. Borger and Greenberg also neglect to note that the governments of the U.S., Netherlands, Bahrain, France, U.K., Australia and Canada classify Hezbollah as a terrorist organization.

Next, The Guardian piece spends a good couple of paragraphs describing the effects of Israel’s unleashed war machine on the average Syrian citizen:

“Mohammed Saeed, another activist who lives in the Damascus suburb of Douma, said: ‘The explosions were so strong that earth shook under us.’ He said the smell of the fire caused by the air raid near Qasioun was detectable kilometres away.”

Heart-wrenching. However, The Guardian simply ignores recent history by not including any background as to what precipitated the Second Lebanon War, which is important if readers are to gain a comprehensive understanding as to the geo-political forces currently at play.

Here’s a dose of inconvenient reality to consider: on July 12th 2006, The Second Lebanon War began when Hezbollah terrorists opened fire with rockets on the Israeli border towns of Zar’it and Shtula, wounding several civilians. This was a diversion for an anti-tank missile attack on two armored Humvees patrolling the Israeli side of the border fence. The purpose of the attack was to capture Israelis who could be used in a prisoner exchange barter. 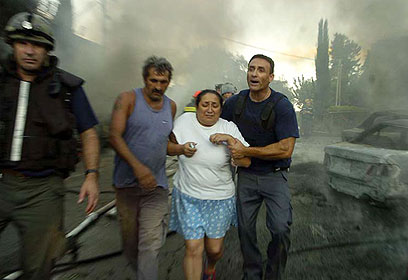 Under cover of this diversionary shelling, two IDF (Israel Defense Forces) patrol vehicles were ambushed. Three soldiers were killed in this attack, two were hurt and two others – Ehud Goldwasser and Eldad Regev – were taken prisoners.

Following the kidnapping, IDF forces opened a massive attack on Hezbollah posts near the border. An armored force entered Lebanese territory seeking to retrieve the abducted soldiers, but a short time later it hit a mine and its four crew members were killed. Attempts to extricate the tank back to Israel ended with another soldier dead.

Shortly after the kidnapping, the Israeli Government unanimously authorized a military operation against Hezbollah forces in Lebanon.

Following a 33-day war, Israel agreed to abide by the terms of United Nations’ Security Council resolution 1701 for an armistice between it and Hezbollah. The resolution called for “a complete halt of acts of aggression, and especially those committed by Hezbollah and the military actions on behalf of Israel.”

Furthermore, Lebanon was asked to implement the already existing resolution 1559 dealing with disarmament of armed militias – first among them being Hezbollah.

It is the article’s historical myopia that makes it possible for The Guardian to downplay the moral imperative behind the recent Israeli military strike and to frame the story as a no-win situation pitting one country’s security against larger regional stability.

And Israel’s right as a sovereign nation to defend its citizens is thus neatly nullified.

Fortunately for Israel, it has the United Nations as an ally. Article 51 of the U.N. Charter states the following: “Nothing in the present Charter shall impair the inherent right of collective or individual self-defense if an armed attack occurs against a member of the United Nations, until the Security Council has taken the measures necessary to maintain international peace and security…”

Good, worthy journalism is based on journalistic objectivity, which has been defined as a “…genuine effort to be an honest broker when it comes to news. That means playing it straight without favouring one side when the facts are in dispute, regardless of your own views and preferences.”.

When a front page news story about Israel and Hezbollah omits both the background and the staggering results of the previous conflict between these two regional players – 4,000 rockets fired upon northern Israeli cities, 164 Israeli citizens (119 soldiers and 45 civilians) killed and hundreds injured – one is compelled to question the qualifications of the journalists on duty to deliver just the facts and allow their readership to draw its own conclusions.

Going forward, Julian Borger and Joel Greenberg would be well advised to keep their opinions firmly within the confines of The Guardian’s op-ed page.

Like Loading...
Tags from the story
Guardian, Hezbollah, Israel, Joel Greenberg, Julian Borger, Terrorism, Uncategorized
Written By
Guest/Cross Post
More from Guest/Cross Post
If your answer is “None”, then: You’re not a citizen of Israel....
Read More

0 replies on “Should Israel’s Security be Sacrificed at the Altar of ‘Regional Stability’?”