Readers will no doubt remember our recent publication of the reply from the BBC News website’s Middle East desk received by a reader in response to a complaint concerning Ahmed Maher’s article of May 1st 2013 in which he claimed that he could not find video evidence of Tunisian Islamists threatening Tunisian Jews.

The BBC reply based its dismissal of the complaint upon statements procured by BBC Arabic’s Ahmed Maher from one Sheikh Bashir bin Hassan.

“I spoke to Sheikh Bashir Bin Hassan, one of the most prominent Salafi, Wahabi sheikhs in post-revolution Tunisian, and asked him again about two things: the chants and the protest in front of the Tunis synagogue. He said: ‘The chants were not aimed at the Tunisian Jews; make no mistake. It was directed at Israel because Israel is a very sensitive issue in the Muslim world. Our Prophet Muhammad asked us to take good care and protect non-Muslims living in our countries like Christians and Jews.’

“Regarding the Tunis synagogue video, Sheikh Bashir Bin Hassan said it was ‘misleading because it was taken out of context. The protest was not against the Tunisian Jews but rather it was in support of Salafists and other Islamist forces in Egypt. The protesters were heading towards the Egyptian embassy in Tunis and they stopped for moments in front of the synagogue to express their anger at the Zionist entity’s policies’.”

As we remarked at the time:

“Get it? According to the BBC, if Tunisian Islamists (and presumably any elsewhere too) chant “Killing the Jews is a duty” or “Khaybar, Khaybar ya Yahud” or ”the army of Mohammed will return”, then local Jews have nothing whatsoever to worry about because in fact they are not referring to them – or indeed to Jews at all – but to Israel, which should apparently be perfectly understandable. And the BBC website’s Middle East desk is quite sure of that because a prominent Salafist – who obviously thinks it unremarkable to chant hate speech relating to “the Zionist entity’s policies” in front of a synagogue in Tunisia – told them so.”

In another recent report by Ahmed Maher (“Syria conflict: Why did my Tunisian son join the rebels?“, May 15th 2013, filmed version here) we learn that Maher’s reliance upon – and amplification of – the opinions of the Saudi Arabia-educated Sheikh was not a one-off event. We also gain further insight into the views of the man the BBC News website’s Middle East desk apparently considers a quotable authority. 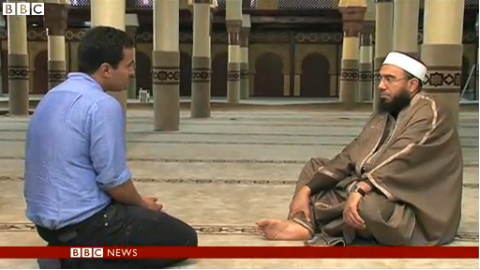 “Many imams, like Sheikh Bashir bin Hassan, endorse jihad in Syria openly and are proud of what they see as the “heroic acts of the young jihadists”.

“They are on a humanitarian mission. The West insists on associating jihad and Salafism to terrorism, which is not true,” Sheikh Bashir told me in an interview inside a mosque in the town of Masakin, 200km (124 miles) south of Tunis.

For Sheikh Bashir, it is justifiable for Sunni Muslims to take arms against the Assad forces, who belong to a Shia sect, to protect oppressed fellow Sunnis – a stance that reflects the sectarian overtone of the conflict.

And he accuses the West of double standards.

“Let’s imagine that the British government decided to attack a county with scud missiles to stamp out a peaceful rebellion. Europeans would be watching entire families being slaughtered day in day out. What would the young do? They would flock in droves to England to protect the oppressed.” “

BBC licence fee payers will no doubt be very interested to know that the BBC considers it acceptable to judge the merits of a complaint on the basis of the opinions of a man who not only subscribes to the inherently antisemitic Wahhabi ideology, but is also openly supportive of jihadist violence.