Today, an Israeli Government Review Committee published a long-awaited report on the Mohammed Al Durah incident, determining that the Palestinian boy was in fact not harmed by Israeli forces and did not die in the exchange of fire on September 30, 2000 at the Netzarim Junction in Gaza.

The Israeli committee arrived at the conclusion which had been reached by other serious observers who have studied the incident (and its tragic consequences) over the years: The incident was in all likelihood a hoax.

The report was released just three days before a French court is to rule on a defamation case involving the producer who broke the story for France 2, Charles Enderlin, and the French media analyst who accused Enderlin of fabricating the story, Philippe Karsenty.  (You can learn more about the background, evidence, and consequences of the Al Durah incident here.)

The following is my fisking of the original report in the Guardian on the Al Durah incident, written by Suzanne Goldenberg and published on Oct. 3, 2000 and titled ‘Making of a martyr’: 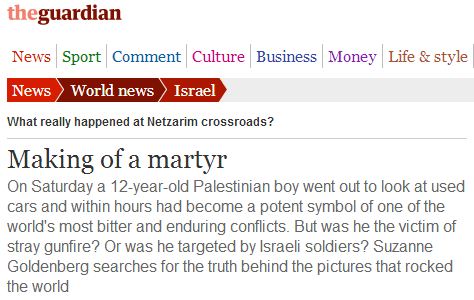 Suzanne Goldenberg begins her Oct. 3, 2000 Guardian account of an incident which had taken place three days earlier, near the Netzarim Junction in Gaza, ‘Making of a martyr’, thus:

“A circle of 15 bullet holes on a cinder block wall, and a smear of darkening blood. That is what marks the spot where a terrified 12-year-old boy spent his final moments, cowering in his father’s arms, before he was hit by a final shot to the stomach, and slumped over, dead. Those last minutes in the life of Mohammed al-Durrah, captured in sickening detail by a Palestinian cameraman working for French TV, have taken on a power of their own. His death, aired around the world on Saturday night, has become the single searing image of these days of bloody rioting.”

Goldenberg, as with nearly every journalist who reported on the incident, was relying entirely on a one minute, deceptively edited, France 2 video, as well as uncorroborated Palestinian “eyewitness” accounts.

While the the video purported to show the boy’s final moments – filmed by stringer named Talal Abu Rama, and which was cut by France 2 producer Charles Enderlin – the last few seconds showed a clearly alive boy lifting his hands and peeking out through his fingers and then slowly putting his arm down.

There is no video or still photos – despite the numerous journalists at the scene – of the boy being carried away in a stretcher, or being loaded onto an ambulance.

Additionally, despite claims that the IDF fired on the boy and his father for 40 minutes – which somehow only managed to produce a dozen or so bullet holes in the wall and barrel – and supposedly died of a stomach wound, it evidently didn’t seem odd to Goldberg that there was only a “smear” of blood?

“The pictures of Mohammed’s death seemed not just to encapsulate the horror of these last five days but also to have become its motor.

Though more Palestinians have been killed since Mohammed’s death – including a two-year-old yesterday – it is his image that haunts Israel. For all of the claims of the prime minister, Ehud Barak, and other officials that their soldiers only fire to protect Israeli lives, Mohammed’s death seems an irrefutable reply.”

Here, any semblance of objective reporting is shrewn to pieces. Not only in the last sentence of this passage is Goldberg determining Israeli guilt in the boy’s death, but imputing malice to the entire army – all based on 63 seconds of video.

“By the end of the weekend the evidence was pointing to a still more chilling conclusion: that the 12-year-old boy and his father were deliberately targeted by Israeli soldiers.”

Goldenberg has now established – a mere four days following the incident – that the 12-year-old Palestinian child was deliberately targeted by Israeli soldiers.

“Caught in a burst of firing, the pair sought shelter behind a concrete water butt, about 15 yards to the east of the Palestinian post, diagonally opposite the Israeli position. The father gestured frantically towards the Israelis, as if pleading with them to stop firing. They did not.

They were cleaning the area. Of course they saw the father,” says Talal Abu-Rama, the camera man who watched the horror unfold. “They were aiming at the boy, and that is what surprised me, yes, because they were shooting at him, not only one time, but many times.”

Goldenberg takes the hideous claim that the IDF decided to fire mercilessly at a young boy until he was dead at face value, without even a hint of journalistic skepticism.  It didn’t occur to the Guardian journalist to ask why, if the  the camera man was filming for 40 minutes, there is no footage of the IDF shooting at the boy and his father, no footage of the Israeli position – and, thus, no evidence even demonstrating where the fire was coming from.

“The result of that salvo is visible on the cinderblock wall. Aside from the circle of bullet holes – most of them below waist level – the expanse of wall is largely unscarred. This appeared to suggest that the Israeli fire was targeted at the father and son.”

The ballistic tests had proved that the three bullets shown in the filmed sequence by Abu Rahma came from the Palestinian side and not from the Israelis. The bullets kicked up dust in a way that could not come from a 30-degree angle of a bullet shot against the wall behind the barrel. Furthermore, given the protection provided by the barrel, it would have been nearly impossible for the Israelis to have hit either father or son once, yet alone over a dozen times.

“Inevitably, the Israeli army version of Mohammed’s death is rather different.”

“Inevitably”? You can see her eyes rolling. Her mind was made up. Judgement was passed.

“Although the army expressed regret about the boy’s death, it said the soldiers in their armoured post had been under fire.”

The incident occurred on the Jewish New Year, so it took a few days for a proper investigation to get under way.

However, Nahum Shahaf, an Israeli physicist, later conducted a thorough investigation and concluded that the killing of Muhammad al-Durah was staged.

“Abu Rameh also believes it unlikely that the Israeli fire could have been directed further down the road from the water butt where the al-Durrahs sought shelter. “In that whole area, there was nobody except me, the boy and his father,” the camera man says.

“Whatever the truth about the circumstances surrounding his death, Mohammed’s terrified face has now entered the grim gallery of images that have come to symbolise – and often to powerfully influence – a conflict.

“Nothing good will come of this. We will have many more martyrs, and nothing will change.””

The image had a spectacular effect, inflaming Palestinian-and Israeli Arab-violence and justifying the Intifada  and the insidious use of suicide bombings, to the West.

There was a mass demonstration in Paris on Oct. 6, 2000.  There were large banners, including one indicating that a Star of David = a swastika = a picture of the father and the son behind the barrel, with ‘They kill children too‘ written over it. The crowd shouted ‘Death to the Jews’ and ‘Death to Israel’ for the first time since the Holocaust.” 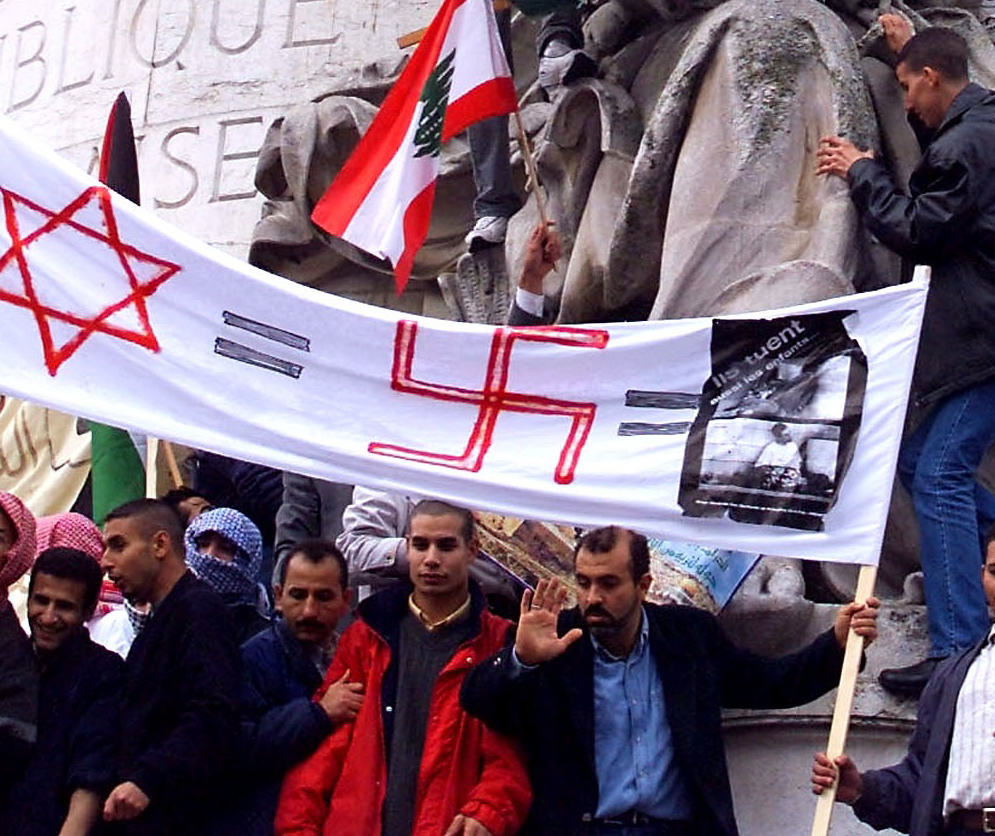 Goldenberg’s protagonist in the story, Abu-Rama, was correct about one thing: Nothing good would come of this media manufactured event, for Israel, Jews or the West.

0 replies on “A blood libel is born: Fisking the Guardian’s original report about Mohammed Al Durah”