He tried and failed several times before, but this week, Ali Abunimah finally made it to Gaza.

Obviously, the co-founder of the Electronic Intifada and passionate anti-Israel activist has devoted fans in the Hamas-ruled territory, and they eagerly awaited his arrival. Everyone – including Abunimah himself – was apparently a bit worried that there might be problems crossing the Egyptian-controlled border, which had been recently closed by Egyptian police to protest the kidnapping of several colleagues by Islamist gunmen. And it’s safe to assume that the fact that Israel couldn’t be blamed for the closure and other problems at the crossing made it all so much harder to bear.

Obviously, during his stay in Gaza, Ali Abunimah will do his very best to come up with many reasons to blame Israel. Indeed, his popular “narratives” about the bottomless evils of Israel and Zionism have presumably led to his invitation to the currently ongoing Palestine Festival of Literature (PalFest) – though it is a bit strange that an activist who likes to present himself as a serious reporter and political commentator would be invited to a festival that is supposedly devoted to literature and the arts. But perhaps Ali Abunimah’s advocacy should indeed be regarded as an art form that deserves to be featured in an event supported by organizations like the British Council and the Arts Council England?

I for one would never accuse Ali Abunimah of sticking to facts or bothering much with reality.

And sure enough, one of his first tweets after crossing from Egypt into Gaza illustrated one of Abunimah’s favorite fairy tales: that Israeli cities like Ashkelon are “occupied” Palestinian towns.

Unsurprisingly, Ali Abunimah is an outspoken supporter of the kind of “resistance” Hamas advocates and practices, and just like Hamas, he doesn’t waste time pretending that he is for peaceful co-existence: Hamas claims a Palestine extending “from the river to the sea,” and Abunimah wants to see this territory as “One Country.” Similarly, while Hamas denounces the Jews as the incarnation of evil, Abunimah makes his living demonizing “the Zionists” as inhumane Nazi-type racists who like nothing better than inflicting untold suffering on the poor Palestinians.

Given the fact that most Israeli Jews are committed  Zionists, it’s of course a bit puzzling why Abunimah would want to condemn the Palestinians to share “One Country” with such evil people.

Moreover, Abunimah’s claims that his “One Country” would be a democratic secular paradise with equal rights for everyone are laughable given the well-documented reactionary and even extremist views of many Palestinians.  As blogger Elder of Ziyon highlighted, a recently published Pew survey of Muslim views demonstrates that Palestinian Muslims “are among the most religiously conservative and intolerant” of the Muslim publics polled by Pew.

It is noteworthy that this preference is reflected in the proposed constitution for a Palestinian state, which stipulates that “Islam is the official religion in Palestine” and that the “principles of Islamic Shari’a shall be the main source of legislation.”

While Ali Abunimah is usually very good at ignoring the unpleasant Palestinian realities that can’t be blamed on Israel, he seemed somewhat upset to come across examples of Sharia enforcement in Gaza. Thus, he was clearly dismayed to find out that for web users in Gaza, “Dating sites are blocked!” – but naturally, he was reluctant to blame Hamas and suggested that “the censorship is done by the PA,” i.e. the Palestinian West Bank authority that he despises so heartily.

However, a Twitter user from Gaza contradicted him, asserting that “Hamas blocked dating sites recently. Part of their ‘modesty’ policing.”

By and large however, Ali Abunimah energetically focused on what he was invited for: demonizing Israel and advocating the abolition of the world’s only Jewish state in favor of his “One Country”-fantasy. Judging from some of the images that were tweeted, it unfortunately looks as if just a handful of people attended his workshop, but there were clearly some enthusiastic fans who listened attentively to “@AliAbunimah debunking the two-state solution. Awesome #PalFest.” 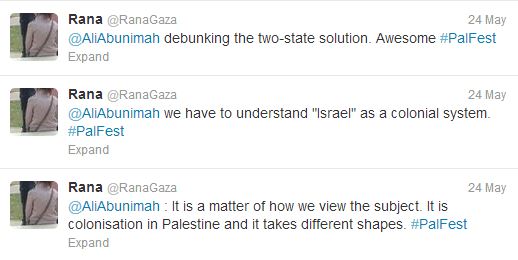 In addition to fulfilling his PalFest obligations by sharing his tips on creating “narratives” to demonize Israel, Abunimah was busy looking out for any new material that could somehow be used to rail about Israel. Among his finds was a sign in Hebrew that he promptly photographed and tweeted with the devastating comment: “Hebrew is still omnipresent in Gaza. #colonialism.” He was also appalled to find out that Gazans use Israeli currency.

Then it was time to echo the popular Palestinian “blood-and-soil”-theme. Visiting Khuza’a in the southern Gaza Strip right at the border with Israel, Abunimah tweeted a picture of a handful of grains with the melodramatic comment: “Palestinian wheat grown in #Gaza with sweat and tears under the occupier’s guns.” Another picture of the area, showing what seems to be a tower in the distance, comes with the claim: “New occupier watch tower regularly fires on farmers working their land in Khuza’a.” However, tweeting yet another picture of apparently the same area, Abunimah lamented that “Land once full of olive trees now barren thanks to occupier bulldozers and tanks.”

While in the real world the plight of Khuza’a’s farmers is due to the unfortunate fact that Gaza terrorists like to use their farmlands to launch attacks on Israel, in the world of Ali Abunimah and his fans, there is of course no reason whatsoever to wonder why the “occupier” would be so cruel to poor, innocent, hard-working Palestinian farmers – it goes without saying that shooting them and making their lives hell is what the evil Zionists like to do just for fun!!!

Let’s all hope that Ali Abunimah will be able to avoid any encounter with farmers in Gaza who attend Israeli fairs and workshops to improve their production – and hopefully, he will not ingest any of their produce! Admittedly, though, should any such misfortune befall him, he surely would find a creative way to spin it into an edifying story about oppressive-colonial-supremacist-racist-Zionist subjugation, exploitation, occupation and much worse…

Thanks to some hardworking – surely female – artisans in Gaza, Ali Abunimah has found an embroidery of his “One Country:”