On May 26th 2013 the BBC published an article on the Middle East page of its BBC News website under the title “‘Rocket fired’ from southern Lebanon towards Israel” and quoting Lebanese “media and security sources”. 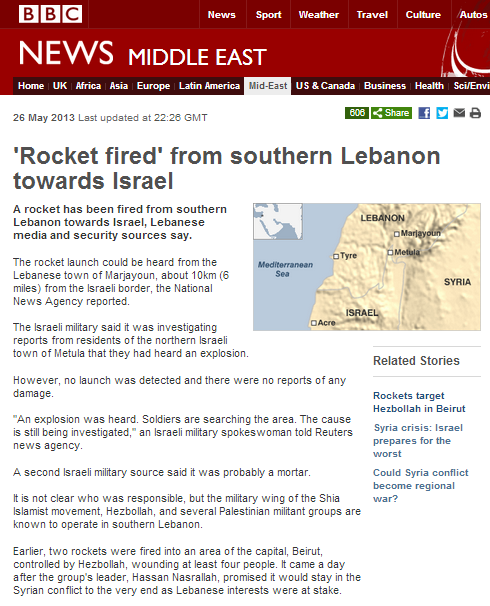 The BBC article was published at 22:26 GMT – about half an hour after initial reports of an explosion having been heard in the vicinity of Metulla came to light shortly before midnight. Later in the day the IDF confirmed that no missile had fallen in Israeli territory, but the BBC report has not been updated to reflect that fact.

Metulla – founded in 1896 – is of course not a “settlement”. But of course to Hizballah supporters such as this former BBC employee, it too is illegitimate – as we see from a translation of Hashem’s second Tweet.

All too often the BBC has failed to report on missile fire directed at Israeli civilians in the region surrounding the Gaza Strip or, more recently, in the Golan Heights. Curiously, in this case it appears to have somewhat jumped the gun.

0 replies on “BBC report on the rocket that wasn’t”