An article appearing on the BBC News website on June 3rd 2013 relates to the appointment of a new Palestinian Authority prime minister. 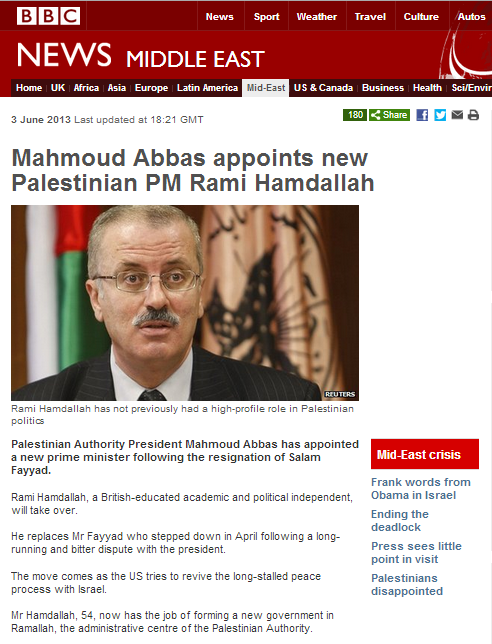 The article describes Rami Hamdallah as being a “political independent” on the one hand and yet on the other states:

“He is currently president of al-Najah National University in the West Bank and seen as close to Mr Abbas’ Fatah party.”

Other media organisations, including Al Jazeera, the Huffington Post and Le Monde as well as the Palestinian site IMEMC (run by the ISM affiliated ‘Palestinian Centre for the Rapprochement between People), state that Hamdallah is actually a member of Fatah, but seeing as he was personally appointed by the PA’s president (whose own elected term of office expired well over four years ago) rather than elected by the Palestinian people, the subject of Hamdallah’s ‘political independence’ is somewhat academic.

What is certainly the case however is that Hamdallah’s proximity to Fatah is close enough to have made him Mahmoud Abbas’ preferred choice for the position – the reasons for which are outlined here and here by Khaled Abu Toameh.

The BBC article is somewhat economic with its descriptions of Mr Hamdallah’s CV. It elects to ignore, for example, his trusteeship and board membership at the ‘Yasser Arafat Foundation’ – the organization which has invested much energy in promoting the conspiracy theory whereby Arafat was supposedly poisoned by Israel.

The BBC also chooses to ignore the fact that under Hamdallah’s presidency, students at An Najar University staged an exhibition glorifying suicide bombers in September 2001 (described by the BBC at the time as an “art show” in a report placed in its website’s  “entertainment: arts” section) which included a gory representation of the Sbarro pizza restaurant where fifteen civilians – many of them women and children – had been murdered only six weeks previously.

It would of course contribute vastly to the BBC’s adherence to its defined ‘public purpose’ of promoting “global outlook” were it to desist from the practice of softening portrayals of the Palestinian leadership – and a new prime minister is a good place to begin.