On May 20th 2013 the BBC News website ran an article on its Middle East page about the release of a new Israeli government report on the subject of the September 30th 2000 incident involving Jamal and Mohammed Al Dura at the Netzarim junction, as featured in a controversial television report by Charles Enderlin of France 2.

The report itself can be read here.

In response to a complaint, the BBC acknowledged three years ago that France 2’s claims of Israeli responsibility for the incident were far from water-tight.

“I think that, in stating as fact that Muhammed Al-Durrah was killed by the Israeli Army, the programme went beyond what could be said with certainty. …

I hope you will accept my apologies, on behalf of the BBC, for the breach of standards in relation to accuracy which we have identified.” “

Nevertheless, the BBC News website continues to this day to promote dubiously captioned images and inaccurate articles relating to the event, suggesting that not all BBC journalists have embraced the BBC Editorial Complaints Unit’s definition of accuracy with regard to this issue.

That impression was further entrenched by the participation of the BBC World Service’s Julia Macfarlane in a revealing Facebook discussion by a private forum of journalists and human rights workers calling itself ‘the Vulture Club’ shortly after the release of the new Israeli government report. 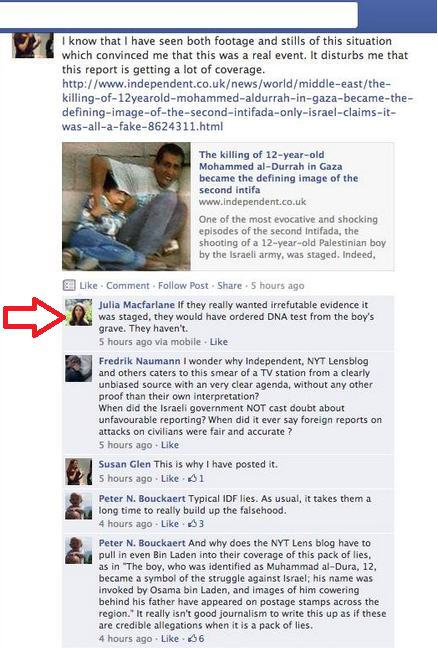 The BBC article on the subject of the new report concludes:

“This controversy around the Dura case has rolled on for more than a decade and is unlikely to stop here, says the BBC’s Jon Donnison in Jerusalem.

As with much of the Israel-Palestinian conflict both sides have entirely different interpretations of what happened on that day, and each side’s version of the truth will likely never be accepted by the other, he adds.”

Donnison’s submissive relativism and Macfarlane’s obvious unwillingness to find the curiosity to look beyond the accepted narrative within her own peer group portend pretty gloomily for the BBC’s ability to meet the standards of accuracy and impartiality to which it claims to adhere.

Related articles: Another lethal narrative on the BBC website.

0 replies on “The BBC’s Macfarlane and the Vulture Club”