The BBC Academy’s College of Journalism was opened in 2005 in the wake of the Hutton Judicial Inquiry with the aim of providing “training for the entire BBC editorial staff”. Its website claims that it “focuses on best practice in core editorial skills, and offers an overview of specialist areas as well as legal and ethical issues”. 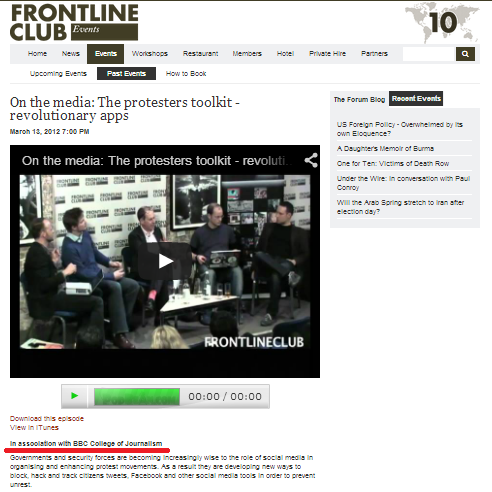 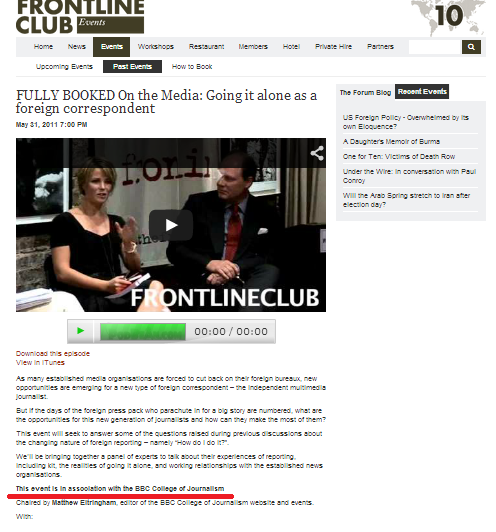 But not only mainstream media journalists appear at the Frontline Club. As the CST recently reminded us, some speakers with decidedly dubious connections are given a platform there too.

“Tonight [June 12th 2013], Ibrahim Hewitt (pro-Palestinian Islamist), David Hearst (senior Guardian writer) and Tim Llewellyn (ex-BBC Middle East correspondent), will be “critiquing the media’s approach to the Israel-Palestine conflict”. The venue is London journalist haunt, the Frontline Club. It will be chaired by Mark McDonald, a founder of Labour Friends of Palestine and the Middle East.

Hewitt is central to this meeting. He is senior editor of Islamist news outfit, Middle East Monitor (MEMO) and runs Interpal, a pro-Palestinian charity. In 2010, CST stated that MEMO’s beliefs about “Zionist” control of media and politicians, made it “unsuitable for Labour MPs and senior Guardian personnel to work with”.”

As noted above, as well as being involved with MEMO, Ibrahim Hewitt is also a trustee of the Hamas-supporting ‘charity’ Interpal which is proscribed by the United States, Australia and Israel. He is seen in the picture below on the left, together with Essam Mustafa of Interpal, visiting Hamas PM Haniyeh in Gaza.

“In July 2006, an investigation by BBC Panorama claimed that Interpal was providing funds to a number of charities in the

Palestinian territories that were affiliated with Hamas. Some of these charities were even run by senior Hamas members. The investigation uncovered video clips of young girls from the al Khalil al Rahman Girls’ Society, which had received money from Interpal. The children sang: “We all sacrifice ourselves for our country. We answer your call and make of our skulls a ladder to your glory, a ladder” … “Fasten your bomb belt, o would-be martyr and fill the square with blood so that we get back our homeland.” “

So here’s a question for BBC licence fee payers: do they consider it appropriate for the BBC College of Journalism to maintain “associations” with an establishment which provides a platform (and even a MEMO organised book launch) for someone who belongs to what it knows itself to be a fundraiser for a terrorist organization?