Andrzej Krauze, a contributing cartoonist for the Guardian Since 1989, is a Brit of Polish origin who, per Guardian editor Alan Rusbridger, “helped introduce an intelligence and sophistication into serious British illustration.”

Journalist Francis Wheen has written the following of Krauze at the Guardian:

“whatever [his] subject … his ironic, cosmopolitan intelligence never fails to enlighten…Like all good intellectuals, he keeps Occam’s razor within easy reach, ready to slash through obfuscation and reveal a plain truth in all its simplicity…this remarkable artist has always accepted the duty that is more traditionally assigned to journalists, though many of them prefer to duck the challenge: he speaks truth to power.”

But there is another face to this “sophisticated” artist.

In Poland he is reportedly a supporter of the far-right Law and Justice Party (known by the acronym PiS).  PiS is the second largest party in the country and campaigns on the slogan “God, Honour, Fatherland”, and is so homophobic that the party sent out an open letter to voters warning that  homosexuality was a “pathology”.

Interestingly, a Guardian report by Ian Traynor in 2009 was extremely critical of Prime Minister David Cameron’s political relationship the Law and Justice Party, and characterized the party as “paranoid towards the outside world”, with “ingrained prejudice and discrimination towards homosexuals” and advocating a “fundamentalist”, militant brand of Catholicism.  And, a 2010 story in the Guardian by Toby Helm described the party as “homophobic” and dangerously nationalistic.

Further, Dr. Rafal Pankowski, an analyst on extremist activity in Poland, argued that the Law and Justice Party is heading in a far-right direction, a fact he illustrated by noting that “some of its MPs supported a radical nationalist skinhead march in Warsaw” in 2011.

As Małgorzata Koraszewska explained to me, Krauze’s involvement with the Law and Justice Party is not surprising given the content of some of the cartoons he publishes in Poland.  In addition to a few cartoons he’s published promoting conspiracy theories about the tragic 2010 plane crash near Smolensk (which killed Poland’s former president, his wife, and 94 other passengers), there are two cartoons which caused quite a scandal in his country: one (depicting Nigerians as wild, black cannibals) which was considered by many to be racist, and the other, published after a bill was proposed in 2009 to allow same-sex marriages in Poland, is grotesquely homophobic.

Here’s the latter cartoon by Krauze, in the Polish newspaper Rzeczpospolita. 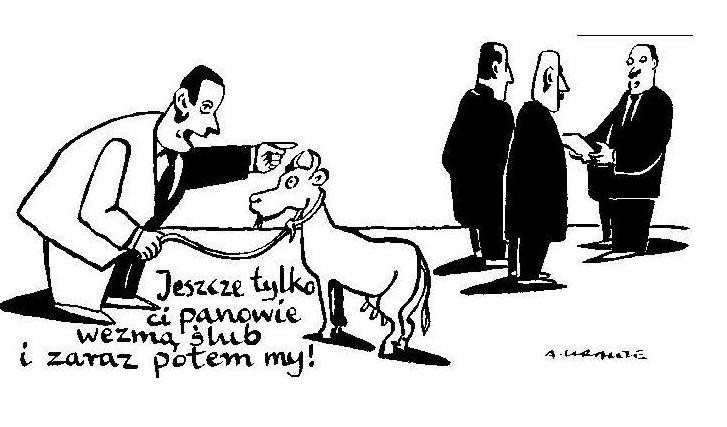 The words uttered by the man in the cartoon talking to the goat translates to: “Just those two gentlemen will get married and it will be our turn next.“

The Guardian, in response to appeals from the Polish gay community demanding that they stop using Krauze’s services, argued that ‘they cannot be responsible for what their cartoonist is doing in his homeland’.

However, Guardian readers and editors weren’t quite so forgiving of the ‘past sins’ argument last year when, as you may recall, Josh Trevino was hired, in Aug. 2012, to provide a conservative perspective on U.S. politics, and then was shortly fired.  Though they cited an unrelated conflict of interest’, it is clear to anyone who followed the row that the Guardian caved to criticism over one Gaza flotilla-related Tweet by Trevino which some claimed was hateful and sanctioned violence.

It’s truly difficult to understand how the “liberal” Guardian could fail to sympathize with those who complain that Krauze’s grotesque characterization of gay sexual intimacy – as somehow morally synonymous with bestiality – legitimizes extreme hatred towards the Polish LGBT community.