Cross posted at the blog,This Ongoing War, edited by Arnold and Frimet Roth.

Trust us on this: being the parents of a child who was murdered changes the way you look at things.

Others might glance at a report quoting this political figure or that official, but that lens of bereavement and the immense frustration and anger that accompanies it tends to make you look a little more deeply than others do.

The secretary-general of the Arab League probably makes headlines whenever he issues a public pronouncement. Without wanting to be unkind, we don’t really care that much what he says or thinks under normal circumstances, and the feeling is probably mutual. Naturally, we  respect and defend his right to speak in the name of the people who appointed him, but Nabeel Elaraby‘s views are background noise so far as we’re concerned.

For the record, he’s a professional diplomat who served as Egypt’s Foreign Minister of Egypt for four months in 2011 and before that was his country’s ambassador in New Delhi between 1981 and 1983. A lawyer, he has an Egyptian law school degree as well as a Masters in Law from NYU.

This morning, we noticed that he has some things to say that actually do intrude into matters about which we take a personal interest. Speaking about a group of convicted practitioners of terror who are serving long prison sentences in Israel, the jurist/politician is quoted yesterday (Tuesday) saying that he is

following with concern the suffering of the Palestinian prisoners who entered indefinite food strike under very serious health conditions, especially the captive, Abdullah Barghouti, who entered into a dangerous condition due to his continued food strike since last May… Elaraby called on the international community to put an end to arrogance of the Israelis who use violence against the Palestinian prisoners [Emirates News Agency/WAM]

In the name of the Arab League, this senior figure launches into an appeal to “the international community, particularly the United Nations, the International Committee of Red Cross and human rights organization [sic]” to get involved and to “save the lives” of the terrorists who are refusing to eat and “to stop the inhumane practices against them“.

It’s significant that the hungry terrorists are not named by Mr Elaraby except for one of them: Barghouti. (We have the other names here.)

Let’s give him the benefit of the doubt: Mr Elaraby may have said the things he said because his Arab League secretariat aides failed to give him a proper briefing ahead of his speech. So we will try to help. And we plan to send this posting to his office by mail right after it goes up on our site.

We have written about this dedicated killer several times in this blog. Most people who speak about him seem to know next to nothing factual, so allow us to share some basics.

Start with this: the judges who sentenced him expressed regret that condemning Abdullah Barghouti to the death penalty was not an option available to them.

If you have seen the award-winning CNN/CBC/Associated Producers documentary “Impact of Terror”, you will recall that it opens with an extreme closeup of a musical instrument, while an explosives expert explains its diabolical character:

Among the fifteen people, mostly children, killed by the work of Barghouti’s hands was Malki, our daughter. 130 others were maimed. The lives devastated by his evil amount to many times more than those awful numbers.

We noted here a week ago that Barghouti has done an outstanding job from his prison cell of highlighting the bestiality that underpins his psychopathic nature. 66 innocent people killed? Not enough, he says without blushing. In the intimate setting of a 2006 interview beamed throughout the world by CBS television’s ’60 Minutes’ program, Barghouti clarifies things unambiguously:

Speaking in an Israeli court in 2010, he again reiterated his dedication to killing more Jews once he is freed again.

Do the people in the Arab League’s leadership know these things? Perhaps we will be able to let our visitors know when our letter gets answered. (We recommend to stay busy in the meantime.)

The wheels of justice caught up with Barghouti a decade ago. Convicted for the murder of dozens of ordinary people, he is serving a longer custodial sentence than anyone else in the history of this country. Yet, when parts of the Arabic press write about him, they call him “administrative detainee“ and “captive”; bitter experience tells us their readers largely believe such nonsense.

(The following is a snapshot of Barghouti’s Facebook page on July 10th – essentially representing a shrine to a confessed and proud mass-murderer.) 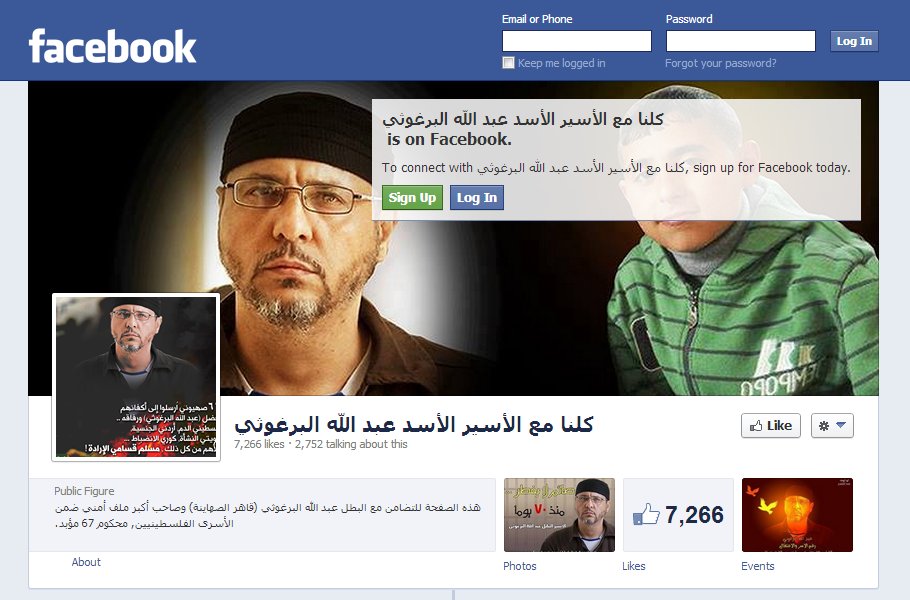 The people who operate the world’s most influential social media website allowed an Abdullah Barghouti page to go up, and have permitted it to stay up. Do they know the facts? We pointed this out two weeks ago [see “25-Jun-13: Dogs, psychopaths and the Internet“], when Barghouti’s active Facebook page had gotten 6,805 Likes; that’s more than a hundred for every one of the dead Israelis he murdered. Go visit his Facebook site this morning and notice that Barghoutti’s savagery now has 7,266 Likes. And of course rising.

What does the Arab League leadership think about such things? Who do they say to questions like these?

Why do we write about matters like this? Because so many people are interested in hearing what we think? Think again. Because we are obsessive? No, though others think we are. Because we’re vengeful? No; others have certainly told us we seek revenge, but we say and firmly believe this is about justice, and injustice, and about human rights in the original, honest, non-politicized sense of that term. And to be clear about this: it’s not for lack of constructive things to do with our time.

We are the parents of a child whose beautiful life, filled with constructive acts of goodness, was brutally ended by the guitar-case bomb engineered by Barghouti. Inside us, there is a burning sense of obligation – call it a hunger – to shake the apathy of people who fail to see that of the dozens of innocent victims of this despicable man, not a single one was caught in the crossfire. They were his target as Barghouti himself confessed. The same is true every time jihadists and other terrorists seek out civilian victims, as they invariably do.

His mission, his passion, was “to kill as many Israelis as possible”. That ought to be on people’s minds when the debate over how to think about the hunger-striking terrorist prisoners reaches the mainstream media’s headlines as it soon will. The imperative to understand this needs to extend in all directions – even into the lofty heights of the executive leadership suite at the League of Arab States.