On the Middle East homepage, the same article was displayed under the heading “Israel cabinet backs inmate release”. 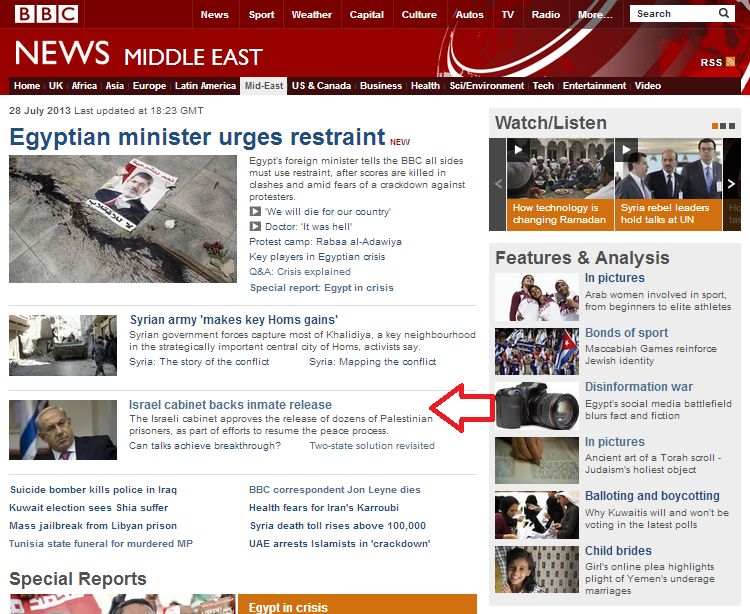 The article’s penultimate paragraph once again promotes the distorted version of the breakdown of the previous round of talks in 2010 which the BBC has been hawking to its audiences intensively for the past few months.

“The issue of settlement-building halted the last direct talks in September 2010.”

As we have remarked here before on numerous occasions:

“In fact, what actually “halted the last direct talks” was Mahmoud Abbas’ refusal to continue them when a ten month building freeze which he had ignored for 90% of its duration came to an end on September 26th 2010.”

With regard to the issue of over a hundred convicted terrorists (described by the BBC as “dozens”, for some reason) scheduled for early release by Israel as a ‘goodwill gesture’ to prompt Palestinian arrival at the negotiating table, the BBC’s choice of wording to describe the men themselves is predictably euphemistic, ranging from “inmates” to “prisoners”.

Their crimes are also severely downplayed once again in this article:

“Some of the prisoners have carried out militant attacks that claimed Israeli lives and were jailed for up to 30 years.”

In fact, as shown in the translated list of those potentially scheduled for release which we published here in June, the vast majority of these prisoners carried out heinous acts of terrorism.

The BBC is apparently afraid to tell its audiences the truth about these men. It whitewashes their crimes with euphemisms such as “militant attacks”, never mentioning their victims or details of their crimes and never informing its audiences of the effect that their release will have upon family members of those victims.

Clearly, to tell BBC audiences the accurate and impartial truth about these terrorists and the full meaning of their release would undermine the existing narrative on the subject of the Arab-Israeli conflict which the BBC has long gone out of its way to promote.

However, in blatant breach of the  ‘Public Purposes’ defined in the BBC’s charter, audiences will not be able to comprehend the gravity of the proposed release of over a hundred violent terrorists, and the real meaning of that step within the framework of renewed talks, if they continue to be provided only with censored information.