For the past two decades Israelis have been waiting for their Palestinian neighbours to come to the table and commence the final status negotiations to which both sides agreed under the terms of the Oslo Accords.

In the meantime, naturally, life goes on. Those who watched Yitzhak Rabin and Yasser Arafat on the White House lawn as young children are now building homes for their own families. In early 1994 Israel’s population stood at 5.3 million. By April 2013 it had topped the eight million mark and of course those people have to live somewhere.

Just as the British government has various financial schemes to help citizens living in remote areas such as the Outer Hebrides, so the government of Israel designates what are known as National Priority Areas. In those areas – which come under regular review – citizens who have chosen not to live in the main metropolitan Tel Aviv area are eligible for various grants, tax breaks or subsidies designed to enable life in the peripheral regions and reduce financial disparity in areas where salaries are generally lower and work harder to find.

Israel’s reality, however, means that distance from urban conurbations is not the only criterion considered when deciding if a particular community is eligible for national priority status. Factors such as proximity to borders are also taken into account, so for example any town or village which is situated less than one kilometre from the border fence surrounding the Gaza Strip will automatically be eligible, as will communities with special security concerns.

There are currently over 600 communities appearing on the list (link here in Hebrew) of National Priority Areas. They range from Metula,

Ghajar and Misgav Am right on the Lebanese-Israeli border, Buqat’a and Majdal Shams on the Syrian-Israeli border, through Erez and Givim on the Gaza Strip border and down to Eilat in the south and they include communities made up of people of a variety of faiths and ethnic backgrounds.

Towards the end of May 2013 the list was due to come up for periodic review by the new Israeli government sworn in two months earlier. However, the Central Bureau of Statistics – which supplies much of the information used to define whether a community is eligible for national priority status or not, such as economic and social indexes – had not been able to complete its work by that time and so the government decided to delay the review until August 4th 2013.

Of more than 600 communities appearing on the new list, twenty did not appear on the previous one dating from 2009. Nine of those communities are located in Judea and Samaria and eleven elsewhere, with five of them being in the Western Negev in proximity to the Gaza Strip. Two communities in Gush Etzion have been removed from the list, as has Beitar Ilit.

However, were you to read the article entitled “Israel widens Jewish settlement subsidies” which appeared on the Middle East page of the BBC News website only hours after the conclusion of the government meeting  which is its subject matter, you might be forgiven for arriving at the conclusion that this government decision was a deliberate spoke in the wheels of talks between Israel and the Palestinians rather than one of the routine periodic reviews which have been going on since the National Priority Areas law was first enacted in January 1993. 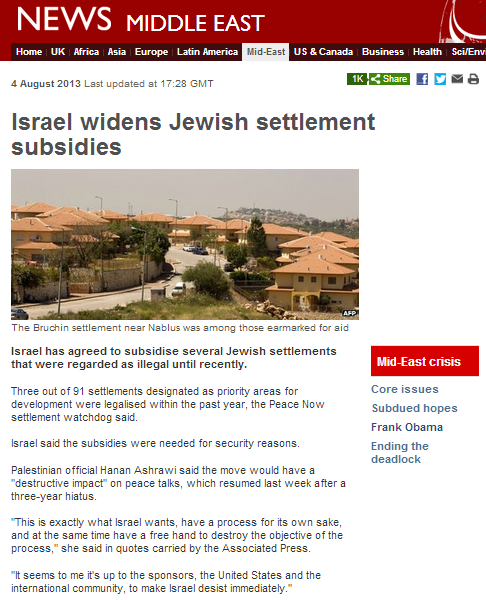 Paragraphs four, five and six of the article are dedicated to showcasing the opinion of the PLO executive committee’s Hanan Ashrawi, whilst the Israeli viewpoint is condensed into a dry one-liner.

“Israel said the subsidies were needed for security reasons.

Palestinian official Hanan Ashrawi said the move would have a “destructive impact” on peace talks, which resumed last week after a three-year hiatus.

“This is exactly what Israel wants, have a process for its own sake, and at the same time have a free hand to destroy the objective of the process,” she said in quotes carried by the Associated Press.

“It seems to me it’s up to the sponsors, the United States and the international community, to make Israel desist immediately.” “

There is of course no logical reason whatsoever why the inclusion of villages in Judea and Samaria on a list of communities  eligible for government subsidies and grants – which expires on 31.7.2017 – should have any “impact” whatsoever on peace talks, let alone a “destructive” one, but the BBC decided to extensively  promote Ashrawi’s empty rhetoric anyway – whilst carefully refraining from informing audiences of the fact that the communities evacuated from the Gaza Strip in 2005 were also defined as areas of national priority.

As we see once again, the backbone of this BBC report is taken from a press release of the same date put out by the politically motivated NGO ‘Peace Now’, to which the BBC report also links. This is of course far from the first time that the BBC has rushed to promote the ‘Peace Now’ campaigning agenda as ‘news’ – see here, here, here and here. Yet again – and in direct breach of BBC guidelines on impartiality – the BBC fails to inform its audiences of the political agenda of the organization it describes only as a “watchdog”.

Clearly the main aim of this article is to persuade audiences of Israeli ‘intransigence’ and to continue the BBC’s already well-entrenched campaign to promote the notion of “settlements” as one of the main obstacles to a Middle East full of sweetness and light. The standard BBC template slogans on that subject are of course included in this article too.

“About 500,000 Jews live in more than 100 settlements built since Israel’s 1967 occupation of the West Bank and East Jerusalem.

Settlements are considered illegal under international law, although Israel disputes this.”

Once again, the BBC deliberately misleads its audiences on the subject of the reason for the halting of talks in 2010:

“The issue of settlement-building halted the last direct talks between the Israelis and Palestinians in September 2010.”

And yet again the BBC whitewashes the crimes of Palestinian and Arab Israeli terrorists slated for release as an ‘incentive’ to the Palestinian Authority to renew talks.

“In order to get the Palestinians to agree to the talks, Israel approved the release of more than 100 Palestinian prisoners.”

In addition, the BBC has also dusted off its side-box of misleading “core Issues” for this article too. 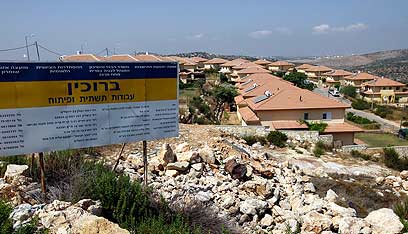 Ironically, the entry of the communities named by the BBC in this article to the list of National Priority Areas came about due to their security situation. In July 2013, thirty-eight Israelis were wounded in terror attacks. Fifty terror attacks took place in Judea & Samaria alone and numerous other ones were foiled. Preceding that, in June, sixty attacks took place in Judea & Samaria, in May – eighty-three and in April – ninety.

Of course the BBC consistently neglects to report on such attacks and so its audiences will be unable to join the dots between Palestinian terror and Israeli government financial support for its citizens living in communities which will of course remain where they are until the Palestinian leadership finally gets round to finishing the job of conducting final status negotiations which it has been putting off for the last twenty years.