If you were to glance at the Guardian’s home page today, you’d be treated to the following featured story: 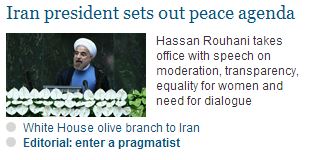 So, apparently, the newly sworn-in Iranian president is launching a “peace” agenda.

Interestingly, if you open the link on the Guardian graphic you get a report by Saeed Kamali Dehghan titled ‘Hassan Rouhani sworn in as president of Iran, urging moderation and respect‘ – indicating that the home page title was the creation of a Guardian editor, and not the author.  Dehghan’s piece is actually a pretty straight forward assessment, simply repeating the highlights of Rouhani’s speech.

However, here’s the passage of Rouhani’s speech highlighted by Dehghan which likely inspired the Guardian headline about the new “peace agenda”:

Rouhani said Iranians sought “peace” and “stability” in their region and across the world and said Tehran was against “foreign intervention” in any country.

Pardon our cynicism, but it seems reasonable to ask if, as part of Rouhani’s new campaign for peace, the Islamic Republic will indeed stop providing money, arms and personnel to the Syrian army – support which has perpetuated the unimaginable bloodshed in a more than two-year long civil war.

Similarly, we can be forgiven for remaining skeptical that the new peace campaign will bring an end to a foreign policy which bestows upon Iran the distinction of being arguably the largest exporter of terror around the globe – which includes crucial support for Islamist terror movements such as Hezbollah, Hamas and Islamic Jihad.

And, those genuine peace advocates among us may reasonably believe that it strains credulity to imagine a brave, new ‘dovish’ Islamist regime which will suddenly cease in its coordinated campaign of antisemitic propaganda, which includes Holocaust denial and incitement to genocide.

So, while continuing to export the Islamic Revolution by providing a military lifeline to the butcher in Damascus and sending sophisticated weapons to terror movements in Lebanon and Gaza, thus helping to destabilize the region, we are being asked to believe that the new President will, nonetheless, emphatically oppose all forms of “foreign intervention”.

Iranian imperialism with a ‘smiling face’, courtesy of the Guardian.