On August 3rd 2013 the BBC Radio 4 programme ‘From Our Own Correspondent’ (also broadcast on the BBC World Service) featured an item by Jake Wallis Simons.

The broadcast can be heard here from around 07:00. The synopsis appearing on the website states:

“Jake Wallis Simons drinks beer with an Israeli settler who tells him that whatever the outcome of the current John Kerry peace initiative, he and others like him, won’t be leaving their settlements.”

In fact, as those who listen to the programme will soon learn, the “Israeli settler” said nothing of the sort. 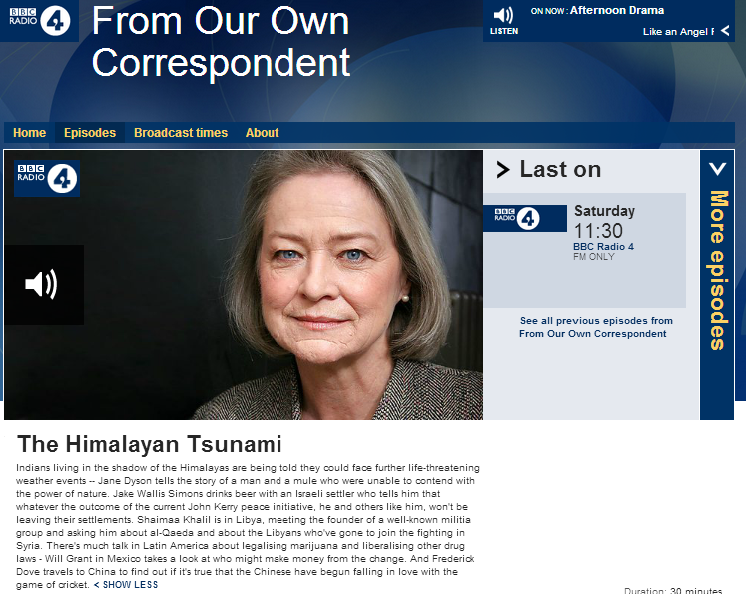 The same false claim is made on the ‘From Our Own Correspondent’ podcast page, where the item can be heard from about 06:00.

The item is introduced by Kate Adie who says: [emphasis added]

“So, Israeli and Palestinian negotiators have set themselves a target of reaching an agreement in nine months. An agreement on what exactly has not yet been defined. But certainly the two sides face formidable difficulties in their discussions, which are due to resume within the next couple of weeks, not least over the territories Israel captured in the Six Day War of 1967 and subsequently occupied, including the West Bank and Arab East Jerusalem. Jake Wallis Simons, who’s just back from Ramallah, says at least half a million Israeli settlers have now made their homes in this occupied land and whatever deal is reached, many will be reluctant to leave.”

Ah – so now we’ve gone from “won’t be leaving” to “reluctant to leave”. That’s quite a difference.

Apparently, Adie has not read the new BBC ‘Key Terms’ guide which states:

“Avoid the phrase ‘Arab East Jerusalem’, too, unless you also have space to explain that Israel has annexed the area and claims it as part of its capital (East Jerusalem is sometimes referred as Arab East Jerusalem, partly because it was under Jordanian control between 1949 and 1967).”

“It occurs to me, as I sip a cold beer, that this moment could easily be mistaken for idyllic. Neve Erez, which sits on a sun-bleached hilltop in the Judean desert between Ramallah and Jericho, is home to thirty young Jewish families who live off the land, growing everything from lemons and apples to pomelos, pomegranates, carobs and figs. They used to rear livestock but, as one resident tells me, it kept getting stolen by the Bedouin.”

Neve Erez – named after Erez Gerstein who was killed in a roadside bomb attack in Lebanon in 1999 – is actually situated very near Ma’ale Mikhmas – less than a 40 minute drive from Jerusalem.

“The village is comprised of a ramshackle assortment of caravans, shacks and tents. A feeling of quietude hangs in the oven-hot air and not even the slightest traffic noise can be heard. From the outskirts the view falls away into a vista of cream-coloured mountains where Abraham, Isaac and Jacob are said to have journeyed. And – under a network of canopies – lies a makeshift pub where you can contemplate the landscape whilst drinking a bottle of Gold Star [sic] lager.”

One really does have to listen to the actual broadcast in order to appreciate not only Wallis Simons’ ‘creative’ pronunciation, but also the tone of voice he adopts when he later paraphrases quotes from his interviewees. Readers can get a better idea of that “makeshift pub” from its website – here.

Wallis Simons then gets into his stride:

“I’m deep in the heart of the West Bank and this is an illegal settlement. In 2001, on orders from the prime minister, the Israeli army evicted the residents of Neve Erez and bulldozed their improvised homes. Now, in a show of defiance, the settlers are back. ‘We came back first of all because we wanted to’ says Noam Cohen, one of three founding members of this community who runs the pub with his wife Tehila. ‘We wanted to live how we wanted to live and we wanted to do it here; not on any other hilltop.’ ‘The question isn’t why don’t we live somewhere else’ adds Tehila, ‘the question is why shouldn’t we live here. This is our homeland’. “

Interestingly, Wallis Simons refrains from telling his BBC audiences that Neve Erez is an ecological community. Perhaps he felt that the dissonance that information might create would hinder the image of ‘settlers’ which he goes to so much effort to craft in the minds of his listeners.

“Recent months have seen the US Secretary of State John Kerry shuttling frantically back and forth between Israeli and Palestinian leaders. Finally, his efforts have been rewarded with a glimmer of hope. The two sides have agreed to continue talking. This might not sound like much but in the context of three years of stalemate, it qualifies as a success. Any eventual peace deal would require Israel to dismantle a sizeable number of Jewish communities to make room for a contiguous Palestinian state. High on the demolition list will be this place, Neve Erez : pub and all it was built on private Palestinian land, which is illegal even under Israeli law.” [emphasis added]

In actual fact, even ‘Peace Now’ does not claim that “pub and all” Neve Erez was built entirely on private Palestinian land.

In 2004 the then deputy Minister of Defence answered a question on the subject in the Knesset. He stated that whilst the community of Neve Erez itself was built on state land, the approach road, lighting posts and perimeter fence were built on land to which there were four different Palestinian claimants.

” ‘I can partly understand the Palestinian claim on the land’ says Noam. ‘I see how I love this place and I’ve only been here fourteen years. What’s it going to do to someone who’s lived here for fifty years? Some of their fathers were born here, some of their grandfathers were born here. But fortunately I’m not a Palestinian. I’m a Jewish person and I base my claim on three thousand years of history’.

The international community believes that this conflict will only be resolved by the establishment of an independent Palestinian state. This has been pursued ever since the Oslo Accords were signed twenty years ago this September. And it is the goal on which John Kerry is setting his sights – somewhat quixotically – once again.

Settlers like Noam and Tehila fundamentally oppose the idea. ‘A Palestinian state would make no difference at all’ says Noam. ‘The root of the problem is that the Arabs don’t want another culture here. The PLO was trying to push us out even before what they call the occupation. They attacked us many times, even before there was a single Jew on the West Bank’.

I take another sip of beer. So what in their view is the solution? ‘We Jews need to stand on our truth’ says Tehila. ‘This place is ours; even the archaeology says so. If we say this very clearly to the world, the Arabs will respect that and – when they finally accept that we are here, that this is our land, that we’re not going anywhere – they can live with us as guests’.

If John Kerry’s efforts were successful and if Neve Erez was to be evacuated, Noam and Tehila say they would go quietly, even if later they tried to come back quietly.”

So they didn’t in fact say – as advertised by the BBC – that they “won’t be leaving their settlements”: quite the opposite in fact.

Wallis Simons – apparently having conducted a poll of the entire 500,000 people he calls “settlers” (which, for transparency’s sake, the BBC should surely make public if in fact it exists) – continues with the claim:

“But many others would not. In 2005 Israeli authorities forcibly evicted 8,500 Jewish settlers from the Gaza Strip. At the time, to some Israelis, it felt like a form of civil war and led to more violence and acrimony. Now there are more than half a million settlers living on the West Bank and in East Jerusalem and most of them aren’t willing to leave. Now that is a sobering thought.”

If Wallis Simons is claiming that the 2005 disengagement from the Gaza Strip was accompanied or followed by violence, then that is an outright fabrication on his part. If he meant to say – as is true – that the 2005 disengagement “led to more violence” on the part of Hamas and other terrorist organisations based in the Gaza Strip, then he should have made that clearer to his audiences because – given the sentence that follows – most reasonable people will understand him to be issuing a dark warning of violence to come.

This ‘From Our Own Correspondent’ broadcast is riddled with inaccuracy and bias. Wallis Simons’ own all too evident prejudices are transparently projected onto half a million people who are unable to reply and he is clearly playing to a gallery he thinks holds the same bijou stereotypes as his own.

Were the BBC not so deeply entrenched in its own politically motivated vigorous campaign to brainwash its audiences into perceiving ‘settlements’ as the obstacle to peace, it would be able to see on just how many counts Wallis Simons’ piece breaches BBC editorial guidelines. But it is, so it can’t.

And it seems that it is not just the actual ‘settlements’ which are fair game in this campaign, but the people who live in them too. Of course half a million people are no more universally ‘hilltop youth’ – as Wallis Simons is trying hard to portray them – because of their post-code than all the people in England are EDL supporters by virtue of their address. Nevertheless, they can apparently now be broadly tarred with the brush of ‘potentially violent’ by any old journalist looking to make a few quid by riding the currently rising wave – with no regard whatsoever for the standards to which the BBC professes to adhere.