What are the millions of viewers of BBC television news being told about the recent early release of 26 men convicted of murder, attempted murder or accessory to murder?

This filmed report by the BBC Jerusalem bureau’s Yolande Knell was broadcast on BBC television news as well as appearing on the Middle East page of the BBC News website. 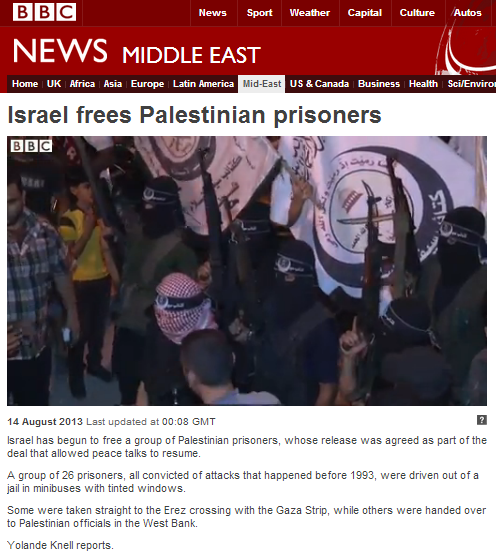 The report’s synopsis as it appears on the BBC News website states:

“A group of 26 prisoners, all convicted of attacks that happened before 1993, were driven out of a jail in minibuses with tinted windows.” [emphasis added]

In fact one of the released prisoners was arrested in 2001 for the murder of four Palestinians and a significant number of others were convicted for attacks which took place in 1993 – rather than “before” 1993 – and in 1994.

“Well this is a big deal for the Palestinians, certainly. I was at the Beitunia checkpoint where these eleven Palestinian prisoners were returned to the West Bank. When you meet members of their families, the well-wishers there, of course they see these men as heroes of the Palestinian cause. Erm…and really they feel that they had been in prison for an extremely long time – most of them about twenty years or so – and they feel that this release was long overdue.”

At no point in her report does Knell bother to clarify for her audiences the nature of the crimes of which these men were convicted. She therefore denies viewers the ability to judge for themselves whether or not twenty years in prison is “an extremely long time” for shooting a young father in the head at point-blank range, murdering an elderly Holocaust survivor with an axe or carrying out the vigilante killings of Palestinians.

Note too Knell’s amplification of the language commonly used by terrorist groups and their supporters: “heroes of the Palestinian cause”.

“This is of course the first round of several releases that we’re expecting Israel to make as part of its agreement with the Palestinians ahead of a resumption of peace talks. A hundred and four Palestinian prisoners in Israeli jails – most of them will have served these long sentences – are expected to be released in the coming months.”

Again – Knell’s shepherding of audiences into perceiving the prison terms as “long sentences” without providing the context of the crime or crimes committed is all too apparent.

“And, Yolande, as we’re speaking to you we’re just looking at the pictures – err..many saying Mahmoud Abbas the Palestinian president who is seen embracing these prisoners – it’s gonna [sic] be a huge popularity boost for him and particularly pushing him at the centre point of this peace process.”

“Well I think that is true to some extent and certainly he sought to make political capital out of this release. Those prisoners were whisked off from the checkpoint where I was watching them to his presidential compound here in Ramallah and there parties are taking place and the big family reunions. That’s being shown widely of course on Palestinian television.”

Significantly, at no point during her shallow reporting of the “parties” and “big family reunions” does Knell bother to make clear to her audiences the significance of the fact that these events celebrating the release of murderers are organised by the same (foreign aid  funded) Palestinian Authority which is supposed to be a ‘partner for peace’. At no point does she raise the question of how such official public displays of the glorification of terror and violent crime against foreign tourists, Israelis and Palestinians might be perceived as one of the “core issues” central to the peace process and may in fact be reasonably described as one of what the BBC likes to term “obstacles to peace”.

She goes on to say:

“Similar scenes in Gaza taking place. Hundreds of people there turned out to greet…errm…their loved ones who were returning through the Erez checkpoint just a little earlier. Errm…and this is a more difficult situation there for Hamas which governs Gaza and is of course the political rivals of Mr Abbas and they have been speaking out against these peace talks.”

Of course Hamas – and other terrorist factions – have actually been doing rather more than “speaking out”. Knell conveniently neglects to mention the recent rise in missile fire from the Gaza Strip (unreported by the BBC) and specifically the attacks carried out just as these prisoners were being released on Tuesday night.

“Errm…but still I have to say despite this prisoner release there is a lot of scepticism on the Palestinian street after we had this announcement at the start of the week that the Israeli government gave its final approval for the construction of one thousand two hundred new homes in settlements in East Jerusalem and the West Bank – land that the Palestinians want for their future state.”

The accurate number of housing units put up for tender is of course 1,187 – not 1,200 as the BBC has been relentlessly and mistakenly reporting – and, in line with previous BBC reports on the subject, Knell provides no context by informing viewers of the fact that no building freeze has been agreed.

“And then there’s also a lot of scepticism on the Israeli side. Even the Israeli cabinet’s been very divided about this prisoner release. Of course while these men are received here as heroes, by the Israelis they’re considered to be terrorists – people who have blood on their hands.”

Quite what Knell and her colleagues ‘consider’ people who have engaged in the premeditated murder of women and pensioners (and who most definitely do have blood on their hands, as proven in a court of law) to be besides terrorists is not a moot question.  But critically Knell’s use of language – which is clearly intended to promote the idea of moral equivalence between the perception of these prisoners as “heroes of the Palestinian cause” and the all too obvious fact that they engaged in violent acts of terrorism – is particularly disingenuous – and downright ridiculous – when her words are broadcast against a background of images of masked gunmen and flags of terrorist organisations such as the Palestinian Islamic Jihad, Hamas and the DFLP.