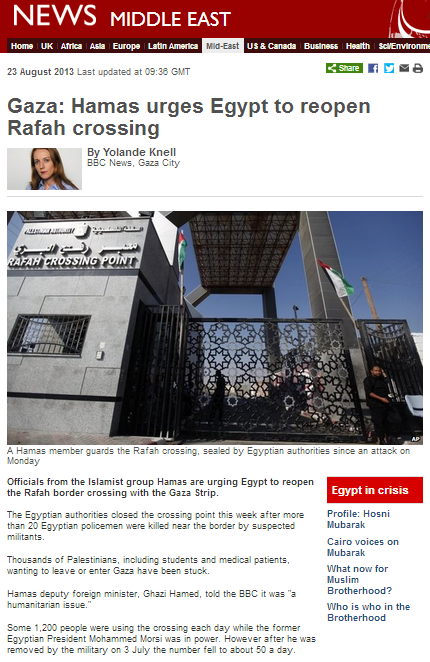 Knell’s subject matter is Egypt’s latest closure of the Rafah crossing, but beyond amplifying Hamas propaganda on the issue, she makes little effort to provide her readers with the background information necessary to understand the context of the Egyptian move. She opens:

“Officials from the Islamist group Hamas are urging Egypt to reopen the Rafah border crossing with the Gaza Strip.

The Egyptian authorities closed the crossing point this week after more than 20 Egyptian policemen were killed near the border by suspected militants.

Thousands of Palestinians, including students and medical patients, wanting to leave or enter Gaza have been stuck.

“Cairo has repeatedly accused Hamas of interfering in Egyptian affairs and has accused Palestinians of supporting Islamist militants in the increasingly restive Sinai region.

Knell offers no balance to this blatant propaganda from BBC regular Ghazi Hamad. She fails to draw her readers’ attention to this latest manifestation of the tried and trusted Hamas modus operandi of turning a blind eye to terrorism originating in the territory it purports to govern and then crying ‘humanitarian crisis’ when the targets of that terrorism take action against it.

Crucially, she neglects to inform her readers of the fact that some of the terrorist groups operating in the Sinai Peninsula are based in the Gaza Strip.

“Some 15 different Salafi groups affiliated with the global jihad movement and Al-Qaida are operating in Sinai, according to senior officials in the Shin Bet security service. […]

The four groups most active against Israel are Ansar Bayt al-Maqdis, which has fired rockets at Eilat several times, most recently last week; Majlis Shura al-Mujahideen Fi Aknaf Bayt al-Maqdis, which killed an Israeli civilian working on the border fence in June 2012; Al-Takfir wal-Hijra, which perpetrated the August 2012 attack in which 16 Egyptian policemen were killed, ; and Jaish al-Islam, a group started by the Dughmush clan from Gaza that was involved in kidnapping soldier Gilad Shalit, and has since branched out into Sinai, where it has tried unsuccessfully to kidnap Israeli tourists. […]

“…another significant factor in this development was Israel’s 2005 pullout from Gaza, which brought Gaza and Sinai much closer together. This process increased further after Hamas seized power in Gaza in 2007, and peaked after the fall of Hosni Mubarak’s regime in Egypt in 2011.

Contrary to what the Shin Bet and Military Intelligence had expected, after the disengagement Gaza began exporting terror to Sinai rather than the other way around.” […]

“Moreover, over the last two years, Gaza has become a base for Salafis from all over the Arab world seeking military training. The senior official said that most of the training camps are run by Mumtaz Dughmush, the head of Jaish al-Islam. The group gets money from individuals and organizations abroad that support global jihad, and its courses last several weeks. Its trainees then go on to Sinai, Syria, Yemen and elsewhere.

The official said Hamas is aware of Dughmush’s activities, but has agreed to let the Gaza training camps operate in exchange for Dughmush’s promise that neither the operatives who train there nor Jaish al-Islam itself will operate from the Gaza Strip.”

Knell’s article is illustrated with the bizarrely captioned photograph below: 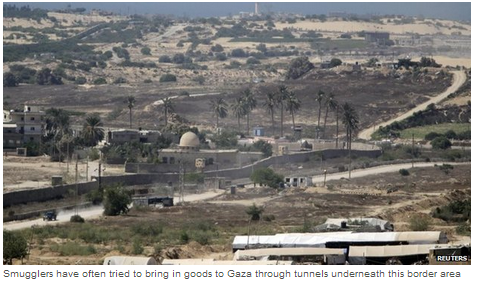 That is a very tame way of describing an entire industry, but Knell’s euphemisms do not stop there.

“As part of its operation against Islamic extremists in the Sinai, the Egyptian military has also demolished many of the tunnels that lie under the border with Gaza.

Palestinian smugglers mainly use them to bring in cheap fuel and goods. However, sometimes militants use them too.” [emphasis added]

One has to wonder if Yolande Knell has actually bothered to familiarize herself with the subject of weapons trafficking routes into the Gaza Strip.

And of course Knell is predictably incapable of writing an article about Hamas and Egypt without at least one gratuitous side-swipe at Israel.

“Rafah is Gaza’s main gateway to the world while other crossings and transit points on the border with Israel are subject to strict restrictions, which Israel says are for reasons of security.” [emphasis added]

Knell also informs her readers that:

This reversion to the BBC’s old form is particularly jarring given that in recent months we have seen something of an improvement in compliance with editorial guidelines on accuracy with regard to the subject of Hamas’ designation as a terrorist organization.

In April  BBC audiences read that:

”Israel, as well as the United States and the European Union, regard Hamas as a terrorist organisation.”

“Hamas is listed as a terrorist organisation by Israel, the United States, the European Union, Canada and Japan.”

Of course that is not the entire picture – for example, Australia designates Hamas’ Izz al Din Al Qassam Brigades as a terrorist organization, as does New Zealand since 2010 – but nevertheless, it is considerably more accurate than Knell’s latest offering of “Israel sees Hamas as a terrorist group”.

Another accuracy issue in Knell’s article is that the day before it was published – on Thursday, August 22nd – Maher Abu Sabha, who is Hamas’ Director General of the Rafah crossing, had already informed journalists that the crossing was to be opened for four hours daily as from Saturday August 24th – as indeed was the case. Not only did Knell fail to inform BBC audiences of that development in her article, but as of the time of writing, no mention of it has been made on the BBC News website.