Back in June we filed the BBC’s eager presentation of Iran’s then newly elected president Hassan Rouhani as a ‘moderate’ and a ‘reformer’ under the heading “A BBC theme to watch“. Since then we have seen the BBC obliged to correct the erroneous claim that remarks made by Rouhani at an Al Quds Day parade alluded only to territories gained by Israel during the Six Day War, with that claim previously having been defended on air by the BBC Persian Service’s Rana Rahimpour.

An article appearing on the BBC News website’s Middle East page on September 6th – titled “Iran foreign minister Zarif tweets happy Jewish new year” – once again promotes the notion of a moderate, accommodating new Iranian regime, using the ‘evidence’ of a couple of Tweets sent by the Iranian Foreign Minister as the base for that claim. To underscore that theme, the report includes a side box of ‘analysis’ by Rana Rahimpour which includes the decidedly far-fetched claim that:

“Furthermore, this rare instance of Iran’s foreign minister using Twitter to respond to the daughter of a senior politician in the US, a country with which Tehran has had no diplomatic relations for three decades, means Iran is attempting to distance itself from the radical views of the last president.” 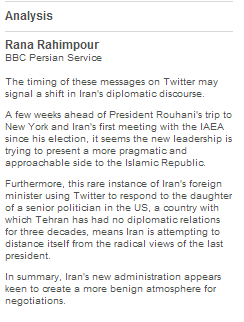 The day prior to the appearance of this article, the BBC published another report on the subject of purported Rosh HaShana greetings in Tweets from the Iranian leadership in which it bizarrely claimed that between 25,000 and 80,000 Jews currently live in Iran. This latest report repeats the same claim.

In a Twitter exchange that followed, he also distanced himself from the Holocaust denials of former President Mahmoud Ahmadinejad.”

It goes on to say:

“But in an interview given to Tasnim and published on Mr Zarif’s Facebook page, the foreign minister confirmed he sent the “Happy Rosh Hashana” message because of Iran’s Jewish community.

He then had a response from Christine Pelosi, the daughter of Nancy Pelosi, Minority Leader of the US House of Representatives, who said: “Thanks. The new year would be even sweeter if you would end Iran’s Holocaust denial, sir”.

He replied: “Iran never denied it. The man who was perceived to be denying it is now gone. Happy New Year.”

He was referring to Mr Ahmadinejad who, during his presidency, frequently claimed the Holocaust was a lie.

“We have condemned the killing of Jews by Nazis as we condemn [the] killing and crackdown on Palestinians by Zionists,” Mr Zarif told Tasnim.

Zarif’s attempt to place the onus of what he revealingly terms “perceived” Holocaust denial solely upon the shoulders of Ahmadinejad is of course tactical and cynical, but interestingly this BBC article fails to inform readers of that fact – and not for the first time. Readers may remember that a recent backgrounder on the subject of Al Quds day written by another staff member at the BBC Persian Service similarly attempted to downplay the Iranian regime’s propagation of Holocaust denial right from its apex.

“When a person expresses his objection to the myth of Holocaust and announced that he does not believe it, they throw him into prison. They sentence him to prison for denying a fictitious event. Even if we assume that the event is not fictitious, even if we assume that it is a true story, is it a crime to deny a true historical event? If a person is not convinced of the truth of the Holocaust and he denies the story or expresses doubt about it, he is thrown into prison. This is what they are doing in the European countries that claim to be civilized.”

Moreover, the BBC appears to have no qualms about repeating Zarif’s comparison of the actions of the Nazis to “[the] killing and crackdown on Palestinians by Zionists” without pointing out to audiences the antisemitic nature of that comment.

Courtesy of a video from 2006 posted by Ha’aretz, we see that Zarif is no stranger to using the Holocaust to advance his all too apparent agenda.

The BBC’s presentation to its audiences of tactical moves by the Iranian regime as a sign of its “seeking warmer ties with the West and Israel” would be naive and puerile enough at any time, but whilst that same regime continues to imprison and execute political dissidents, to provide backing for Bashar Assad and assorted terrorist organisations and whilst the BBC tones down Iranian rhetoric threatening Israel  and the US in the event of Western action in Syria, such ‘analysis’ can only be seen as either dire ineptitude or politically motivated design.