Below is our regular end of month count of articles appearing on the Middle East page of the BBC News website according to the countries/territories defined by the BBC as making up that region per the profiles on that page.

In addition, another category appears this month due to the fact that between September 1st and 16th inclusive, non-headline written reports also appeared under the special heading of “Syria conflict: Special report”. 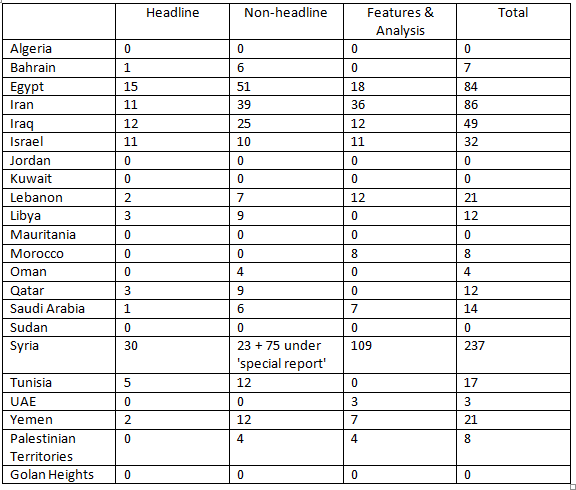 As we see, Syria understandably received the most coverage by far – especially during the first half of the month when a Western air-strike seemed imminent and the BBC had a team in Damascus. In second place with regard to coverage came Iran, then Egypt. Iraq – where almost 1,000 civilians were killed in September – was fourth in terms of coverage and Israel was fifth. Despite the political turmoil in Tunisia – and the broader interest that subject raises due to Tunisia’s being the ‘swallow’ of the ‘Arab Spring’ – that country only came eighth in terms of coverage.