On October 2nd 2013 the BBC News website published an article titled “Israel PM calls Iran leader ‘wolf in sheep’s clothing’” which supposedly informs BBC audiences about the speech made by PM Netanyahu at the UN General Assembly the previous day.

The article opens with a gross inaccuracy:

“Israeli Prime Minister Benjamin Netanyahu has warned against working with the Iranian government.”

In fact, a significant proportion of Netanyahu’s speech was devoted to the subject of safeguards which should be employed by the international community whilst negotiating with Iran.

“So here is what the international community must do: First, keep up the sanctions. If Iran advances its nuclear weapons program during negotiations, strengthen the sanctions.

Second, don’t agree to a partial deal. A partial deal would lift international sanctions that have taken years to put in place in exchange for cosmetic concessions that will take only weeks for Iran to reverse.

In other words, Netanyahu did not warn “against working with the Iranian government” at all – but he did urge the international community to go about it in a rational and cautious manner.

Despite the fact that this 490 word article (not including the side-box of analysis from the BBC Jerusalem Bureau’s Kevin Connolly) actually only includes 179 words on the subject of Netanyahu’s speech itself (with the other 311 words being devoted to Iranian reactions to it and other issues), another inaccuracy appears further on in the report.

“He [Netanyahu] claimed that Mr Rouhani – in his previous role as Iran’s chief nuclear negotiator – masterminded a strategy that enabled his country to move closer to developing nuclear weapons.”

The actual words used by Netanyahu were as follows:

He even brags about this. Here’s what he said in his 2011 book about his time as Iran’s chief nuclear negotiator, and I quote: “While we were talking to the Europeans in Tehran, we were installing equipment in Isfahan.”

Now, for those of you who don’t know, the Isfahan facility is an indispensable part of Iran’s nuclear weapons program. That’s where uranium ore called yellowcake is converted into an enrichable form. Rouhani boasted, and I quote, “By creating a calm environment — a calm environment — we were able to complete the work in Isfahan.” He fooled the world once. Now he thinks he can fool it again.”

As readers can see for themselves, there is no mention of the Bond film-like word “masterminded” and of course the BBC neglects to inform audiences that Netanyahu’s remarks were based on quotes from Rouhani himself.

Here is Rouhani in an interview with the Iranian regime’s IRIB during his recent election campaign. During that campaign, some of Rouhani’s opponents had accused him of giving in to the West during his stint as nuclear negotiator, effectively halting Iran’s nuclear programme. This is his reply to those accusations.

In his side-box of ‘analysis’ Kevin Connolly promotes the facile notion of Israel as the Grinch spoiling everyone else’s party.

“The Israeli nightmare is a world in which ties between its best friend and its worst enemy improve.” 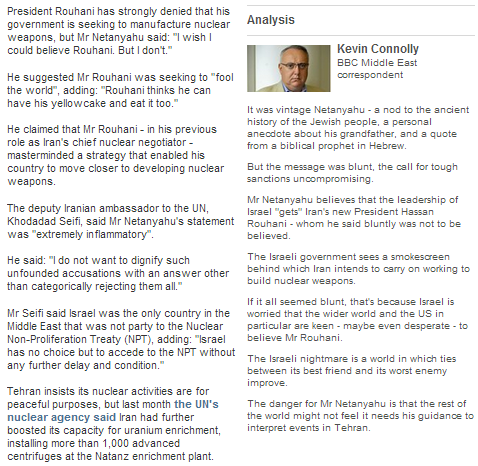 No, Mr Connolly, Israel’s nightmare (and that of several other countries in the region which you conveniently neglect to mention) is that a repressive, theocratic, terror-sponsoring dictatorship will acquire nuclear military capability whilst the rest of the world stands by and does nothing.

If that is the best ‘analysis’ the BBC can offer its audiences on such a critical issue, then one really has to wonder why it bothers at all.

With its focus on unimportant sound-bites rather than content and its promotion of obvious inaccuracies, this report does nothing to inform BBC audiences of the substance of PM Netanyahu’s speech at the UN GA, thus failing to meet the criteria defined in the BBC’s ‘Public Purposes’ and preventing BBC audiences from building “a global understanding of international issues” which in turn enables them to “participate in the global debate on significant international issues”.