As readers may remember, back in February we noted here that a report by the then BBC Gaza Strip correspondent Jon Donnison – which was promoted on several BBC platforms and in various formats – included a mistranslation of the words of one interviewee.

“Another version of the same story was also featured on Radio 4′s ‘PM’ programme on February 26th – available here for a limited period of time from 41:38. In that version, at 43:37, one can hear a translator interpret the words of interviewee Nour Adwan as “If we meet an Israeli and they are speaking in Hebrew..”.  Sharp eared listeners will notice that the fifteen year-old actually says the word “Yahud” – Jew – in Arabic rather than “Israeli”, but for some reason, the BBC chose to modify that in translation.”

A BBC Watch reader has now informed us of the findings of the BBC Trust’s Editorial Standards Committee with regard to a complaint (not upheld) he made about that mistranslation and those findings reveal some very interesting points concerning the Trust’s interpretation of BBC Editorial Guidelines on accuracy.

In the summary of its findings (page 5 in this document) the BBC Trusts Editorial Standards Committee writes: [emphasis added]

“The complaint concerned the translation of the Arabic word “Al-Yahoud” in an item about Hebrew being taught in Hamas-run schools in Gaza. The complainant said that the term translates literally into English as “the Jews” and it was inaccurate for the programme to have translated this as “an Israeli” in the English voice over. The complainant alleged that this was a mistranslation which was materially misleading. The complainant also alleged that the programme should have included the information that Arabic had been taught in Israeli schools for decades and that not mentioning this fact demonstrated a lack of due impartiality.

that it was not the case that only a literal translation would have met audience expectation for due accuracy.

that no interpretation of the editorial guidelines requires content producers to make direct word-for-word translations without also taking account of relevant context.

that the programme makers had demonstrated they had taken care to reach a considered view on the appropriate translation, taking into account the circumstances in which the contributor was discussing interaction.

that the decision to translate the contributor’s words as “an Israeli” was an appropriate exercise of editorial judgement.

that, in the light of the programme team’s explanation of why it felt the decision not to use the literal translation was the right one, the translation employed by the programme was well sourced and based on sound evidence.

that the programme had taken account of sensitivities in this area and that it had borne these in mind when reaching its decision to translate the content in the way it had.

that the programme team had demonstrated that it had weighed all the relevant facts, and taken into account the context in which the girl was speaking, and to whom she was most likely to be referring, in reaching its decision to translate the words she used as it did.

that the chosen translation did not dilute the contributor’s hostility or soften the impact of her words. The Committee therefore concluded that the programme had achieved due accuracy as required by the editorial guidelines.

that the situations in Gaza and Israel were not analogous and it was a legitimate exercise of editorial judgement not to include the information regarding the teaching of Arabic in Israeli schools in this report.

that, as well as meeting the requirements of due accuracy, the programme had achieved due impartiality as required by the Editorial Guidelines.”

The full findings (well worth reading) can be found on pages 52 – 58 of the same document. There, inter alia, we learn that: [emphasis added]

“The Committee did not accept the complainant’s contention that only a literal translation of the girl’s words would have met audience expectation. It noted the overarching requirement of the Editorial Guidelines, requiring that content observe “due accuracy” and “due impartiality”, i.e. that it is adequate and appropriate taking into account the subject and nature of the content and the likely audience expectation. The Committee noted that the requirements for “due accuracy” and “due impartiality” underpin the entire guidelines. In this case, as the ECU had also found, the programme-makers had demonstrated that they had taken care to reach a considered view on the appropriate translation, taking into account the circumstances in which the girl was discussing interaction.”

“The Committee considered that the decision to translate the girl’s words as “an Israeli” was an appropriate exercise of editorial judgement. In taking this view the Committee emphasised that no interpretation of the Editorial Guidelines requires content producers to make direct word-for-word translations without also taking account of relevant context. “

With regard to the specific translation in question, we also learn that: [emphasis added]

“The Committee noted that the programme did not deny the distinction between “Jews” and “Israelis”, but that in this context it felt that it would be misleading not to give the audience a clearer picture of whom the girl was most likely referring to and that a literal translation would not necessarily have achieved that.”

In other words, the programme makers amended the translation to fit in with their own subjective interpretation of what the interviewee might have meant.

“The Committee noted the programme’s response to the ECU explaining why it felt the decision not to use the literal translation was the right one:

“It is clear in the context that she is talking about crossing the border into Israel and meeting Israelis. Translating the words as Israelis made the most sense within this context and didn’t alter the meaning or tone of her comment. Her distrust and dislike, which was clear from her quote, was of Israelis not of Jews. Jon [Donnison] thought long and hard about this translation but on the advice of Israeli and Palestinian colleagues they came to this decision. He also added that not in this case, but in interviews with other Palestinians who have used the word ‘Jehud’ [sic], he has clarified what the interviewee meant and they nearly always say they mean Israelis unless they are referring specifically to the religion.”  ” [emphasis added]

Most importantly, we also learn that: 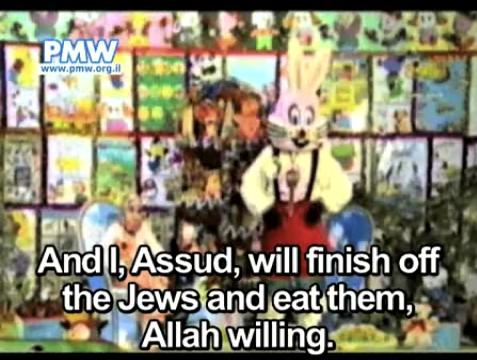 “The Committee accepted that the main editorial purpose of this news item was to report that Hamas schools were teaching children Hebrew as “the language of the enemy”. The programme-makers, based on their professional judgement, understood the enemy in this case to be Israel, and the Committee understood the reasons why the programme felt it was important to communicate that clearly.” [emphasis added]

In other words, the programme-makers’ “professional judgement” led them to believe that Hamas makes a distinction between Israelis (the enemy) and Jews (not the enemy) and intended by means of this translation distortion to clarify that.

Apparently that “professional judgement” has never come across the antisemitic themes which dominate the Hamas Charter or the words of Hamas leader Mahmoud Zahar from 2009, for example.

The obvious attempt by the programme-makers to tone down and censor the type of propaganda with which children in the Gaza Strip are indoctrinated by Hamas in schools, summer camps or on television by replacing the word ‘Jew’ with ‘Israeli’ – thus making it more palatable for Western audiences sensitive to issues of racism – indicates the existence of a problem far greater than mistranslation – and one which apparently exists even in the highest echelons of the BBC.