After the first round of 26 Palestinian pre-Oslo prisoners were released by Israel in August, as a concession to renew peace talks, the Guardian published three celebratory photos, in their Picture Desk Live series, all showing the prisoners being reunited with their families. The captions used for the photos all failed to even mention the Israeli victims of the crimes committed by the freed Palestinians.

Now, as Israel begins the painful process of releasing the second group of 26 pre-Oslo prisoners, the Guardian’s coverage continues to highlight the released terrorists while all but ignoring their victims. 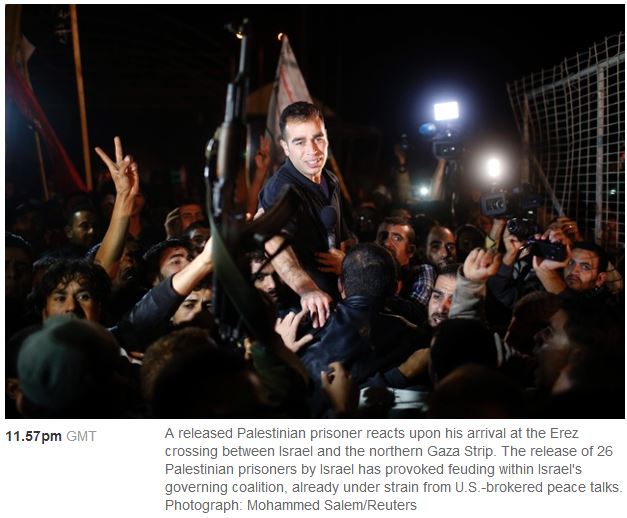 The Guardian also added a video of Palestinians celebrating the prisoner release (to accompany an AP story they published today) that included an image of what appears to be the same man in the photo above. 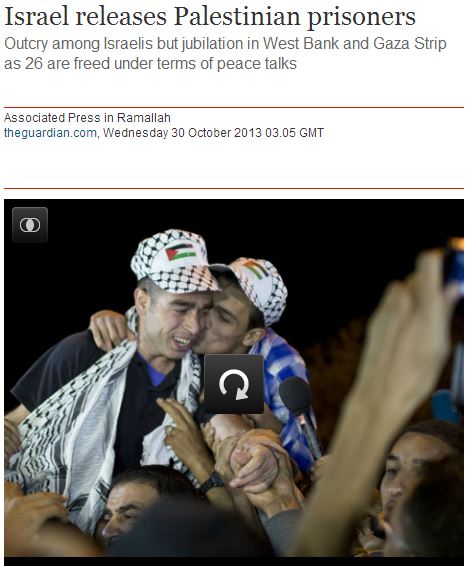 Though both the caption and video failed to identify the freed Palestinian, other sites indicate that he is Shabbir Hazam (aka, Shabir Kassam Taher Hazam). Shabbir Hazam, born in 1974, was a member of Fatah and a resident of Gaza who was arrested in 1994 and sentenced to life imprisonment for (along with an accomplice) murdering a work colleague – Isaac Rotenberg from Holon – with an axe.

Here is a photo of Rotenberg:

As we’ve noted previously Isaac Rotenberg, born in Poland, was a Holocaust survivor.  Most of his family was murdered in the Sobibor death camp, but Isaac managed to escape and joined the partisans. After the war he tried to make his way to mandate Palestine, but was interred by the British and sent to a detention camp in Cyprus until 1947. After his release Isaac arrived in pre-state Israel and fought in the War of Independence. He continued his work as a plasterer even after pension age and in March 1994 was at his place of work in Petah Tikva when he was attacked by Shabbir Hazam (and another Palestinian worker) with an axe.

Whilst the Guardian’s coverage of the prisoner release continues to highlight the joy of the freed terrorist and their families, the Jews (and Palestinian ‘collaborators’) they murdered continue to largely remain nameless and faceless.