Yair Rosenberg writes the following in an Oct. 30 story for Tablet:

Visit the web site of the national British daily newspaper, the Independent, and you’ll find an article titled, “Rabbi bans students from eating soy in case it leads to gay sex.”

Actually you won’t find it anymore, because, after Rosenberg’s superb fisking of the story – which demonstrated that the Hebrew source for the claim said the exact opposite – the Independent completely removed the article from their website.

However, here’s a cached page of the deleted article: 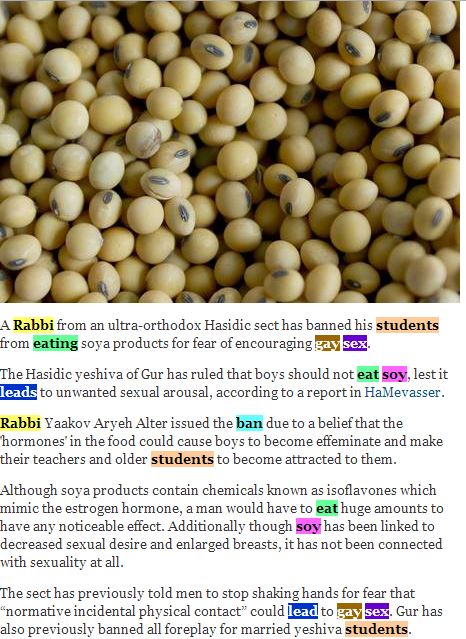 Rosenberg ends his piece by admonishing the Indy for “apparently citing sources [they couldn’t] read or confirm, and embroidering them with utterly fictitious details” – ‘rumor mill’ style journalism we recently exposed in a post about an increasingly notorious anti-Zionist blogger.

To read more about another British daily “newspaper” which obsessively trades in fictitious, reckless, sensational, and ideologically driven allegations against a particular state in the Middle East, you can simply continue following this blog.

0 replies on “The Independent or Richard Silverstein? An internet rumor of rabbis, soy and sex”