On November 6th the BBC News website once more went into Arafat overdose mode with no fewer than five articles presented on its homepage and Middle East page on that day alone. 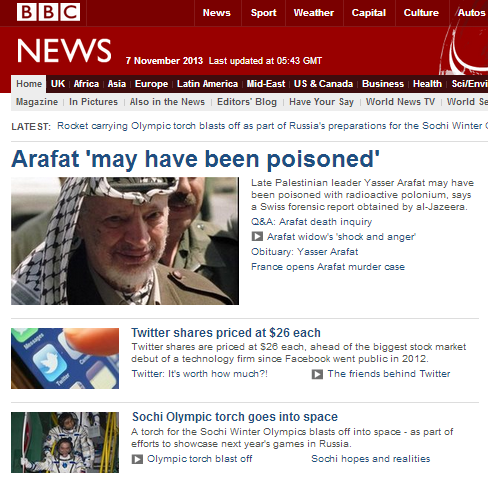 (Note the use of the phrase “obtained by al-Jazeera” in the sub-headings on both those pages, as well as in the opening to the main article.)

As well as the lead article – titled “Yasser Arafat ‘may have been poisoned with polonium’“- which includes a filmed report from Yolande Knell also broadcast on BBC television news, visitors to the website were offered an article titled “Q&A: Investigation into Yasser Arafat’s death” and a filmed Al Jazeera interview with Suha Arafat which promoted further links. 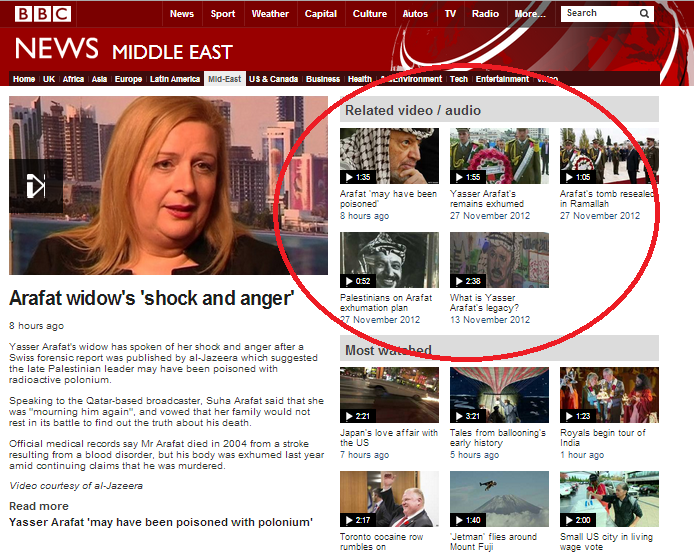 In addition to the above, suggested reading material included an article from August 2012 titled “Yasser Arafat: France opens murder inquiry” and the BBC’s own 2004 obituary for Arafat which whitewashes his role in terrorism and once again promotes the myth of an “unarmed” first Intifada.

The main article, the Q&A, Knell’s filmed report and the August 2012 article all take the trouble to promote the speculation that Israel may have been involved in the as yet unproven poisoning of Arafat.

“However, many Palestinians continue to believe that Israel poisoned him. Israel has denied any involvement.”

“Many Palestinians have long believed that Israel poisoned Arafat. There have also been allegations that he had Aids or cancer. Israel has consistently denied any involvement.”

“Many senior Palestinian officials claim that Arafat was poisoned by Israel.

Israel’s prime minister at the time of Arafat’s death, Ariel Sharon, saw the Palestinian leader as a terrorist and an obstacle to peace.

In 2002, Mr Sharon told the Maariv newspaper that he regretted not “eliminating” Arafat during the invasion of Lebanon in 1982. But he also stressed that Israel had later made a “commitment” not to harm him.

However, Mr Sharon is alleged to have told former US President George W Bush in April 2004 that he no longer felt bound by his promise.

Israel has strenuously denied that it had anything to do with Arafat’s death.”

Such unfounded allegations and conspiracy theories have also been amplified by the BBC in past reporting on the same issue – see here and here for just two examples. As we have remarked previously on these pages:

“The question many license-fee payers must be asking themselves is how does the flagship media organization of their country justify the investment of such quantities of resources, air time and column space on the propagation of fact-free myth-cum-folklore – and why is the BBC lending an air of plausibility to this particular conspiracy theory?”

Interestingly, the filmed interview with Suha Arafat appears to suggest that she has other ideas than those promoted by the BBC.

“We have this very important to separate the political aspect of what the Palestinian Authority is doing – negotiations – and the crime of Yasser Arafat. It’s a separate subject. We have to continue regardless what is asked from us politically. Political peace process will go on the side and the investigation of very shameful crime like this crime has to be – to go on another side, another path. [….] Unfortunately, it’s somebody of his entourage.”

Relevant questions also surround the aspects of this story not being adequately reported by the BBC. The scale of involvement of Qatar’s Al Jazeera in the creation and propagation of the story is confined to a few short sentences in the Q&A article.

“On 3 July 2012, an al-Jazeera documentary reported the results of a nine-month investigation that tried to discover what killed Arafat.”

“A report, published by al-Jazeera, said “unexpectedly high levels” of radioactive polonium-210 had been detected.”

“On 6 November, al-Jazeera revealed the findings of 10 experts at the Vaudois University Hospital Centre (CHUV) in Lausanne.”

That report appears with the Al Jazeera logo, prompting the question of who paid for the tests to be carried out and why. It also shows that the claim that Al Jazeera “obtained” the report as stated in the by-lines highlighted above is inaccurate.

The same article quotes British forensic scientist David Barclay without informing readers that he is apparently retained by Al Jazeera.

“France began a murder inquiry in August 2012 after the Lausanne scientists, working with an al-Jazeera documentary crew, found traces of polonium-210 on Arafat’s personal effects.”

The fact that Al Jazeera’s “documentary crew” is led by the head of its ‘Investigations Unit’ Clayton Swisher (who explains his motives for initiating the story here, complete with souvenir photo of himself hugging Arafat) and that Swisher was also behind the attempt to undermine the Palestinian Authority and derail the peace process with the Al Jazeera/Guardian publication of the leaked ‘Palestine Papers’ is not made clear to BBC audiences.

“The role of Al Jazeera’s Investigations Unit is not to report the news but to make the news. It reveals secrets and exposes truths surrounded by silence.”

As is only too well known, that self-defined remit does not of course extend to serving the public interest by exposing “wrongdoing” or “abuses of power” on the part of the Hamas-financing and sheltering Qatari regime – or even to expose the “secrets” of the extent of Al Jazeera’s own spheres of activity.

Presumably, some sort of editorial discussion with regard to the appropriateness and implications of the extensive amplification of a manufactured story from a source with clear political motives (which, as the BBC has perhaps not yet grasped, extend far beyond the sideshow of Israel) must have taken place at the BBC. Apparently these five articles and the additional ones which followed the next day are the result of that discussion.