According to official BBC figures from June of this year, the corporation’s global news services reach 256 million people each week. How many of those people tuned in to BBC World News on November 19th 2013 is not known, but those who did will have seen BBC Arabic TV editor Edgard Jallad in an interview on the subject of the bombings at the Iranian embassy in Beirut on that day which was also promoted on the BBC News website under the unambiguous heading “What’s behind the bombings?”. 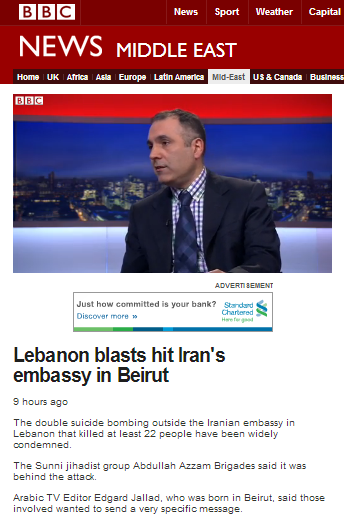 According to Jallad, whose main claim to expertise according to the synopsis on the BBC website appears to be that he was “born in Beirut”:

“Such bombings are not staged for just a simple message. There will be more than one message. The first one could be related to the role of Iran in Syria and this is a major role that is, you know, affecting the whole situation and regional balances.

The second layer in this message could be that Iran is getting closer to an agreement about its nuclear programme with the United States and we’ve heard condemnation by Secretary Kerry now, moments ago, so he strictly condemned what happened and he described it as a terrorist attack. So, this will push some countries to be uncomfortable and unhappy about what’s happening and these countries are very well known. Israel is not happy and the Iranians they accused Israel openly about this.”

Interviewer: “And Israel has denied it, obviously.”

Jallad: “Yeah, and the other part – and we’ve heard it a lot through experts today – they are accusing Saudi Arabia for example because Saudi Arabia is not happy about this deal between Iran and the United States.”

The notion that the bombing in Beirut is linked to the P5+1 talks in Geneva – rather than being connected to the role of Iran and its proxy Hizballah in the Syrian civil war, as clearly stated by the group which took responsibility for the attack – is taken straight out of the Iranian regime’s PR campaign handbook.

“Iran linked the bombing to talks on a nuclear deal in Geneva, accusing Israel of trying to sabotage them and of stoking Mideast tensions, following bomb attacks on its embassy in Beirut.

“I think there is every possibility for success,” Iranian Foreign Minister Mohammad Javad Zarif, who is Iran’s top nuclear negotiator, said after meeting his Italian counterpart Emma Bonino in Rome.

“I go to Geneva with the determination to come out with an agreement at the end of this round,” Zarif said.

But he said that Israel was trying to undermine the talks, after an Iranian foreign ministry spokeswoman accused Tel Aviv of being behind the attacks on Iran’s embassy — a charge immediately denied by Israel.”

“This is a milestone for the BBC, with more than a quarter of a billion people tuning in to radio, TV and digital services every week. Today’s figures shows there is a growing worldwide audience for impartial, trustworthy journalism.”

In fact, of course, an impartial, trustworthy – and responsible – broadcaster would have taken the trouble to provide its audiences with professionally sourced information on the background to, and motives for, the baseless propaganda put out by the theocratic dictatorship which is a major sponsor and supporter of several proscribed terrorist organisations in the region and of the democidal Syrian dictatorship.

The BBC, however, chose once again to amplify, promote and spread that unquestioned and unchallenged propaganda to millions of viewers worldwide.