Nine months ago, in February of this year, it became publicly known that Syrian patients were being treated in Israeli hospitals. In all of that time the BBC has produced one rather odd article by Wyre Davies on its website and one filmed report by BBC Arabic’s Sam Farah – shown on BBC television news and on the BBC News website, but not on the BBC Arabic site.

As we have noted here on numerous occasions, besides that very sparse coverage of the story, it has remained off the BBC’s radar.

On November 3rd the Israeli media gave extensive coverage to the story of a baby boy born to a Syrian mother in Tsfat’s Rifka Ziv hospital. On November 25th an article by the BBC Jerusalem Bureau’s Kevin Connolly on that specific case and on the general subject of Syrian patients treated in Israel appeared in the ‘Features & Analysis’ section of the BBC News website’s Middle East page. The report also includes filmed footage broadcast on BBC television news programmes. 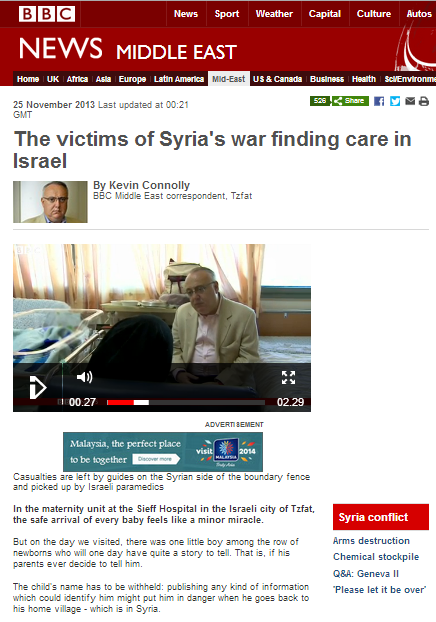 Both the written and filmed reports are interesting, factually accurate and impartial, showing that the BBC can meet its obligations to audiences when it so wishes.