In an Nov. 26 essay titled ‘Australia’s U-turn on Israeli settlements in occupied territories is shameful‘ ‘Comment is Free’ contributor Michael Brull – another anti-Zionist Jewish voice associated with ‘CiF’ Australia – criticizes his country for supporting Israel, alleging that the new government is now “complicit in many breaches of international law” regarding the settlements. 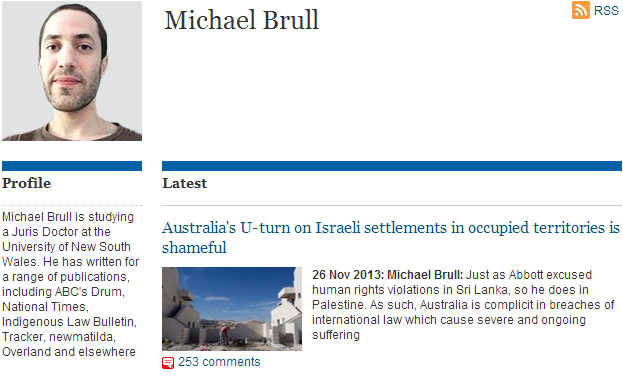 After citing Australia’s recent abstention at the UN in a vote which “called for an end to Israeli settlements in the occupied territories”, Brull adds the following:

There is little controversy about the status of settlements under international law. The international court of justice, in its 2004 advisory opinion on the wall being constructed by Israel in the West Bank, concluded that “the Israeli settlements in the occupied Palestinian territories (including East Jerusalem) have been established in breach of international law.”

Then, a couple of paragraphs down, he purports to quote former Israeli foreign minister Tzipi Livni to buttress his argument:

Livni knows perfectly well why Israel builds settlements. In another candid moment, she explained that “the Israel policy is to take more and more land day after day and that at the end of the day we’ll say that it is impossible we already have the land and cannot create the state.” Livni admitted that this “was the policy of the government for a really long time.” She claimed that whilst it “is still the policy of some of the parties”, the government policy has changed. That was a less candid moment.

However, it’s Brull who is being “less than candid”, as his quote is a mischaracterization of what Livni said (during negotiations with the Palestinians in 2007), as documented in the “Palestine Papers” released by the Guardian in 2011. Indeed, as was widely reported at the time, the Guardian was forced to issue the following correction to a story they published on Jan. 24, 2011 which used the same Livni quote. 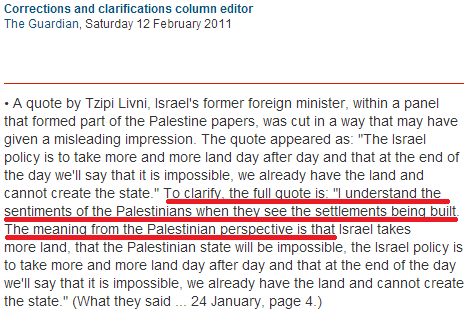 Even worse, in the passage in question in his essay Brull had the audacity to link to the original Guardian report which had the corrected, full quote by Livni.  This suggests that he may have knowingly cut the quote and deleted the words which showed it in its proper context.

As Just Journalism wrote about the Guardian’s “error” at the time, “By cutting the quote to exclude the first part of Tzipi Livni’s sentence, The Guardian portrayed the Israeli politician as brazenly admitting a policy of making a Palestinian state impossible.”