On November 24th we noted the BBC’s consistent under-reporting of news from Palestinian Authority controlled areas, including the lack of coverage of a military parade and a recently launched video by Fatah’s Al Aqsa Martyrs Brigades.

Palestinian Media Watch has now translated parts of that video, noting that it has been posted on Fatah’s official Facebook page.

The various articles and backgrounders on the subjects of Fatah and the Al Aqsa Martyrs Brigades appearing on the BBC website are notable for the fact that the more recent the article, the more the connection between the political and military wings of Fatah is downplayed.

In November 2003 a BBC investigation revealed the transfer of funds from the Palestinian Authority to the Al Aqsa Martyrs Brigades and noted the “close links” between that proscribed terror organization and Fatah. 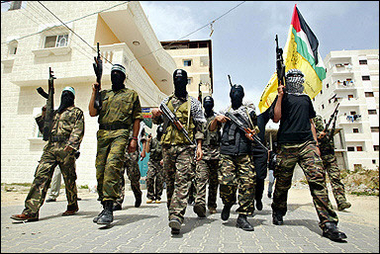 “Close links between Mr Arafat’s political faction Fatah and al-Aqsa are also discovered by the programme. One local Fatah leader in the West Bank town of Jenin says that the al-Aqsa group is the military wing of his organisation and that Mr Arafat is the overall leader of both the political and military arms.

“Fatah has two sections: a military wing, led by the military and a political wing, led by politicians. But there is no difference between Fatah and the al-Aqsa Martyrs’ Brigades,” a leader of Fatah in the Jenin refugee camp tells Correspondent.”

By 2007 the BBC was describing the Al Aqsa Martyrs Brigades as being “affiliated” to Fatah.

“The Fatah-affiliated al-Aqsa Martyrs’ Brigades has participated, along with Hamas, in an informal militant ceasefire since 2005, but conducts what it calls retaliatory attacks against Israel.”

By 2009, the connection was further downplayed:

“The second intifada saw a number of armed groups associated with Fatah and Tanzim emerge, most notably the al-Aqsa Martyrs’ Brigades.

The brigades are neither officially recognised nor openly backed by Fatah, though members often belong to the political faction.”

That description is repeated in a 2011 profile of Fatah which currently appears on the BBC website.

However, Fatah and PA officials have consistently been considerably less coy than the BBC on this subject, with former PM Ahmed Qurei saying in 2004:

“We have clearly declared that the Aksa Martyrs Brigades are part of Fatah,” Qurei said in an interview with the London-based Asharq al-Awsat newspaper. “We are committed to them and Fatah bears full responsibility for the group.”

In February 2013 AFP quoted the following statement from the Al Aqsa Martyrs Brigades:

” “Al Aqsa brigades, the armed wing of the Fatah national liberation movement, mourns with all pride its hero, the martyr of freedom, the prisoner Arafat Jaradat,” the statement said, in reference to Jaradat’s membership of the group.” [emphasis added]

And, as PMW points out: [emphasis added]

Of course any media organization truly committed to keeping its audiences informed in order to “[e]nable individuals to participate in the global debate on significant international issues” (such as the Middle East peace process) would ensure that they had a realistic picture of the nature of the connections between the largest faction comprising the body currently conducting negotiations with Israel and a proscribed terrorist organization which has received operative support from Hizballah, as well as of that faction’s continued incitement and glorification of terrorism as shown, yet again, in this example.