As we have had to point out here on numerous previous occasions, the BBC’s editorial guidelines on impartiality clearly state that the affiliations of interviewees should be made clear to audiences.

“We should not automatically assume that contributors from other organisations (such as academics, journalists, researchers and representatives of charities) are unbiased and we may need to make it clear to the audience when contributors are associated with a particular viewpoint, if it is not apparent from their contribution or from the context in which their contribution is made.” [emphasis added]

“MIDDLE EAST EXPERT”
“Some “experts” may have a history of sympathising with one cause or another even if they have no overt affiliation.

It is preferable, where time and space allow, to provide a lengthier indication of the contributor’s views on past issues so that the audience might calibrate his or her statements for themselves.

In all reporting we should avoid generalisations, bland descriptions and loose phrases which in fact tell us little about a contributor or event. The phrase “Middle East expert” implies the BBC thinks this person’s views have weight and independence. If we can defend that judgement – that’s fine. If not it may be better to avoid the phrase.

Overall, we should seek a precise description – for example, what job does this person hold? Who employs them? Where do they stand in the debate?”

In other words, there are mechanisms in place to ensure that BBC audiences are not misled by partisan opinions disguised as impartial expertise, but those safeguards cannot be effective if the BBC ignores them – as it has done on numerous occasions.

On November 25th 2013 the BBC World Service programme ‘Newsday’ hosted what its presenters termed a “panel of experts” in order to discuss the proposal that “the world is now a safer place” in the wake of the P5+1 deal signed with Iran.

Of the three panel members, only one – Chris Doyle – was introduced together with the name of his organization CAABU. Michael Goldfarb was described as an “American commentator in London”, with no mention made of the fact that he works for the Global Post and for BBC radio. Most egregiously, the founder of CASMII – Abbas Edalat – was introduced merely as someone who “campaigns against Iranian sanctions”.

CASMII (established in the UK in 2005 and in the US in 2006) is of course known for its connections to the Iranian regime and its lobbying activities on behalf of that regime.

The ‘Newsday’ panel discussion is spread throughout the first hour of the programme (available here for a limited period of time), with Doyle and Goldfarb very much taking a back seat and Edalat dominating the discussion and exploiting in full the platform provided by the BBC for the amplification of undiluted Iranian propaganda both on the subject of the recent agreement and on wider regional issues.

“Yes, the.. ah.. Iranian people see this as a historic victory for them, for their struggle, for their inalienable rights of …em…em…mastering the fuel cycle and having a home-based enrichment programme. And it reverses the 1953 coup [in] which the Iranian people struggled to nationalize their oil industry and it led to this coup. Now this whole thing is reversed and the West, headed by the US, has recognized Iran’s right under the NPT, including the home enrichment of uranium.”

When asked by presenter Shaimaa Khalil if it is “too soon to celebrate” Edalat answers:

The notion of a theocratic terror-financing regime which persecutes its own citizens as a ‘stabilising’ regional element is not challenged by Khalil.

From 24:30 Edalat really gets into his stride:

“There are actually two distinct points in that document [the Geneva P5+1 agreement] which assert that Iran can continue and will continue to enrich uranium. Both are for producing fuel rods for energy production, but also the important point here is that…emm…the world is a safer place now not because of any danger that at any time Iran had the desire to develop nuclear weapons. Iran never had that desire – Iran had never had a weapons – nuclear weapons – programme and there’s been a fatwa reiterated many times by Ayatollah Khamenei.”

As we have noted here before:

“There is of course much debate surrounding that unwritten fatwa […]. Readers may find this essay by a former BBC Persian analyst helpful in understanding the significance – or lack of it – of such a fatwa.” 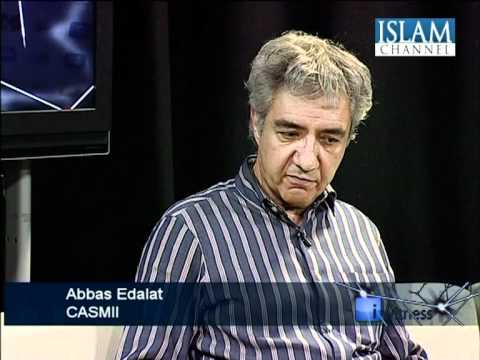 At 36:23 listeners get an interesting glimpse into the Iranian regime’s view of the whole issue via Edalat’s words:

“Well actually Iran’s position has really never changed. I mean since 2003 Iran has repeatedly said that it wants its nuclear rights to be recognised and in return for the right to have a home-based enrichment [of] uranium it’s prepared to go well beyond its obligations to be transparent, to allow inspections of the IAEA – intrusive visits. So Iran’s position has not changed in the last ten years at all and I think this is what’s going to continue. It’s the US and its allies who have retreated from their 2005 position because in 2005 Iran, which only had 164 centrifuges, offered to keep these for research and development and implement and ratify the additional protocols that the EU3 under the pressure of the United States just rejected. So now Iran has got a thousand times more centrifuges. It has mastered the fuel cycle and therefore it’s won the game. I mean and it will continue to fight against these sanctions. The sanctions have been cracked and they will continue to crack and eventually I think there will be a complete rapprochement between the United States – a renormalization of relations.”

None of the other contributors make any effort to balance Edalat’s claim to the “right” to enrich uranium, thus leaving audiences with the distinct impression that such an undisputed right exists under the terms of the NPT.

At 51:00, in reply to the question of whether the Iranian nuclear programme can “come back on track” despite the Geneva agreement, Edalat says:

“Well there’s a fatwa in place in Iran against the production, stockpiling and use of nuclear weapons and all weapons of mass destruction. When Iraq, with support from the West, used chemical weapons against Iran, Iran – although it had the capacity to develop chemical weapons and retaliate in kind – it refused to do so. So the track record of Iran is very clear. Iran is not going to go in that path. But I think there is a real fact that there is a nuclear threat against Israel and that nuclear threat against Israel comes from Israel’s own nuclear arsenal. Because Israel, backed by its nuclear arsenal, has made – waged – aggression against its neighbours in a brutal way, treated Palestinians…and because of that nuclear arsenal has gone away with impunity, this aggression….”

At that point Edalat is finally interrupted by Goldfarb who says:

“Wait a second, that’s just ridiculous. I mean Israel and its neighbours have engaged in many wars. Its neighbours in the last twenty years have been propped up by Iran – long after the Arab armies had stood back and engaged in a diplomatic process, so that’s not entirely true.”

That, however, is the only counter to Edalat’s flow of regime propaganda.

Edalat rounds off with yet another ‘gem’ in response to a question about the wider tensions in the Middle East:

“Well I think the sectarian tensions and conflict in the region has been promoted by Saudis in an unholy alliance with Israel actually. And this fact was only created – produced – because of the intervention of the United States in the region. Before that this [Sunni – Shiia] division did not exist at all. I think Iran can play a very constructive role because Iran has never taken an anti-Sunni position. Never.”

So there we have it: undiluted Iranian regime propaganda broadcast to tens of millions of listeners around the world by the ‘reputable’ BBC World Service in the guise of an “expert” opinion, and with complete abandonment of the editorial obligation to make the connections of that “expert” known to audiences.

The fast-tracking of a complaint to the BBC

The unstated connections of a BBC R4 Middle East ‘expert’

Why does the Guardian get Middle East analysis wrong?