Any political tactic is going to start delivering diminishing returns after ten or more years of not accomplishing a single one of its goals. And with the BDS “movement” about to turn thirteen, we seem to be reaching a point where even their alleged “triumphs” can barely earn a mention beyond the fever-swamps of the anti-Israel blogosphere.

BDS was born at the now legendary 2001 Durban South Africa in 2001 when the global network of Israel haters decided the fight against global racism had to take a back seat to their own parochial concerns.  And their main concern was kicking off a world-wide propaganda campaign to brand Israel as the new Apartheid South Africa with divestment (since rebranded BDS) their tactic of choice.

This tactic required major organizations like famous universities, venerable churches, respected municipalities and unions to divest from the Jewish state, a program that generated some headlines in its early years but no actual divestment.  And more than a decade later, with investment pouring into Israeli companies from around the world, with colleges and universities falling all over one another to form partnerships with their Israeli counterparts, with Israeli power brands like SodaStream and Ahava on the shelves of retailers large and small, the BDSers have been reduced to getting largely unknown organizations to pass toothless boycott and divestment resolutions that accomplish less than nothing.

Most recently, a vote by the American Studies Association (ASA) to boycott Israeli academic institutions was passed the same way other votes have gone the BDSers way in recent months: by stacking decision-making committees with people who are BDSers first, academics second, whose fanatic devotion to “the cause” means they are ready to pass politicized motions they had no mandate to even discuss.  And like stacked student council votes that passed on a few campuses in the Spring, the notion that these measures represent student or academic opinion is laughable.

That’s because for any political measure to have an impact it must either be seen to reflect the will of the people it is supposed to represent or have some direct consequential impact.  But BDS votes taken in forums that involve as few people as possible demonstrate that even the boycotters know they are acting in their own interest, rather than the interest of those they are supposed to represent.

And as for consequences, the ASA vote is likely to produce the same complete lack of action similar votes have led to over the years.  That means no programs linking US and Israeli universities will be severed, no Israeli scholar will be disinvited from participating in a conference or submitting to a journal, no Israeli graduate student will be denied a place at a university, even with a boycott in place that allegedly represents the policy of an entire academic discipline.

This is because those who make such decisions, including those who forced this ASA boycott vote, know that actually enacting the boycott program they just stuffed down the throat of the membership would earn them the immediate and well-deserved contempt of the entire academy.  Which is why this vote, like all “successful” BDS votes, represents nothing because it will lead to nothing.

But perhaps I’m wrong.  Perhaps this time, the people pushing an academic boycott are ready to do more than just strike a pose in someone else’s name.  In which case, they have a very simple and extremely effective path to follow.

For in 2007, as a response to a proposed academic boycott from the major academic union in the UK (which was soon rescinded – of course), over a hundred US college presidents declared that for purposes of any academic boycott that their institutions should be considered Israeli universities and also boycotted. 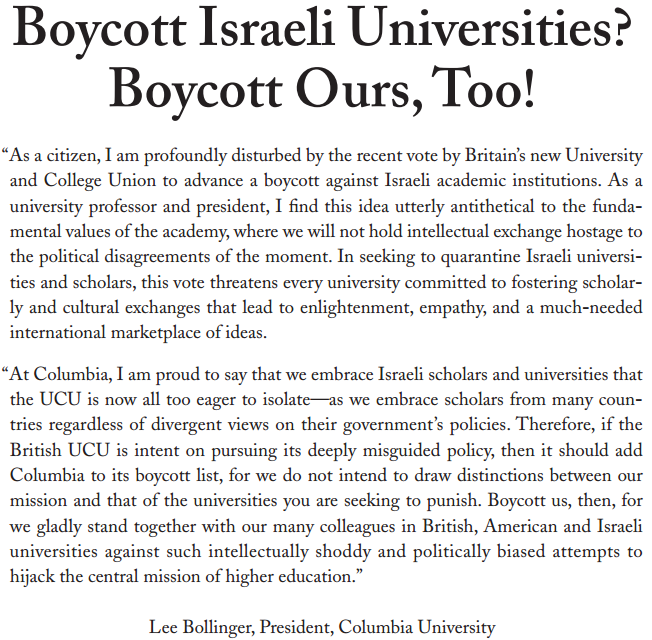 So the “scholars” driving the boycott within the ASA are now in a position to demonstrate their commitment to the cause by resigning en mass before spending another hour continuing as scabs to the very boycott they initiated.  No doubt severing their ties to their current employers might cause some professional hardship, but such suffering is as nothing compared to the plight of the people they claim to be fighting for.

So how about it guys?  Are you ready to put up?  If not, you know what the only other alternative is.

0 replies on “Divest This! A modest proposal to the American Studies Association”